Mayo v Tyrone. It's a wonderfully unique All-Ireland final pairing. While the two counties have never met in a Sam Maguire decider before, Mayo and Tyrone have locked horns plenty of times over the last twenty years.

It might not be as celebrated some of the more famous GAA rivalries, but the Mayo-Tyrone rivalry is fascinating in its own right.

Two of the most recognisable players to come from both counties in the past twenty years - Ryan 'Ricey' McMenamin and Conor Mortimer - sat down with Kieran Donaghy for AIB's Rivalries Reignited All-Ireland final preview on Youtube - to give a flavour of the history of the rivalry.

Mortimer admitted that it was a Hastings Cup game at U21 level in 2001 that brought the rivalry on.

"The rivalry between Mayo and Tyrone started with the Hastings Cup in the U21s many years ago when Tyrone beat us," he said.

"In Mayo we always say that could have been us that won those two All-Irelands. The majority of that team played and it was a very tight Hastings Cup game.

"They won three All-Irelands where we didn't. Particularly with the bunch of players we had because it was the same bunch of players coming through. We haven't really met in the last couple of years bar this game coming up on Saturday."

While Tyrone had a knack of winning All-Irelands in the noughties, it was Tyrone's win over Mayo in the 2008 qualifiers that proved pivotal in inspiring their All-Ireland run that year.

"2008 ranks well because we're out on the road and we're out on our feet," Tyrone's Ryan McMenamin said. "We knew Mayo were favourites going into the game."

"The lift we got from beating Mayo.. We said 'bang' and we were away."

And Mortimer admits that was the game that brought an end to that era of a Mayo team that had reached two All-Irelands.

"That was probably the start of our regression I think," he explained.

"It put us back a long, long time til John [O'Mahony] left and [James] Horan came in. But we had four or five bad years after [that]."

Saturday's decider at Croke Park is set to be one of the most tight All-Ireland football finals in recent memory, with little to choose between the two teams.

Who has what it takes to claim enteral GAA glory in this historic All-Ireland Final? 👀 The Senior Championship All-Ireland Final IS ON!! 🔥 #TheToughest @MayoGAA @TyroneGAALive pic.twitter.com/kZxiMk4lzl

"I think it's going to be a really tight game and I think they've got to be brave and back themselves because Mayo do a lot of one-v-ones and do a lot of running," McMenamin said.

We do have to nail Tommy Conroy early doors with his running game.

If we can get that stopped, and if we can get a grip on the middle of the field I do think Tyrone hold aces even with the bench as well.

I think we have a stronger bench.

Mortimer himself is also expecting a tough outing for his native Mayo against an 'intense' Tyrone.

"We need to play a high-octane game for 70 minutes," he stressed. We've only played in halves in the last two or three games.

"In an All-Ireland final a team won't give you that opportunity to get back into the game. The game will be over at half-time if we don't play from the 1st minute to the 70th minute.

"If Tyrone's three main players, Matty Donnelly, Petey McGrath and Meyler, don't play well, it's hard to see them having a complete performance around the pitch.

"If Mayo can match Tyrone's intensity and hunger on the day, they could win the game. But if they don't, it will be a very difficult game to win."

SEE ALSO: No Bad Blood, But Mayo And Tyrone Have Given Each Other Reason To Believe 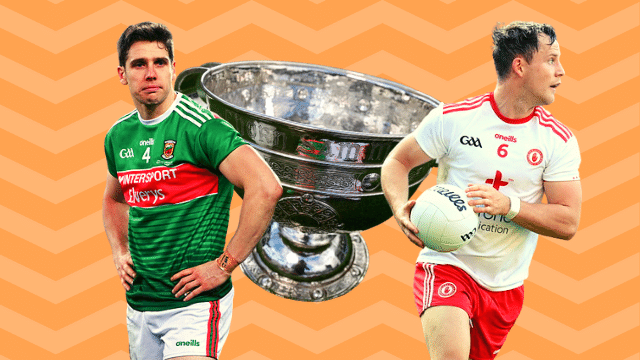 gaelic football
8 months ago
By Andrew Dempsey
How To Watch Mayo V Tyrone In The All Ireland Football Final
Popular on Balls
GAA
3 days ago
By PJ Browne
Mayo's Padraig O'Hora Using Football To Promote His Real Passion
Rugby
1 day ago
By Colman Stanley
'That Pace, That Intensity, That Organisation' All Black Legend Has High Praise For Leinster
GAA
1 day ago
By PJ Browne
Jim McGuinness's Gut Tells Him Dublin Will Win The All-Ireland
The Rewind
2 days ago
By Eoin Harrington
Watch: Brilliant Dermot Morgan Dublin Segment From 'The Travel Show' Resurfaces