As sad as it is to know that EA Sports won't be releasing another rugby game anytime soon, at least they left us with a few titles that are still playable to this day if you've got a PS2 lying around.

The first rugby game, simply called 'EA Sports Rugby' was released in 2002 and Ireland were really weak in comparison to the other countries with few players that could really change a game. Then came Rugby 2004 and 2005 where players did not have overall ratings, but Ireland were noticeably stronger as the squad had come a long way in those few years..

But Rugby 06.. That was the first game where Irish gamers knew they could use their team and have a chance against anyone in the game, and it was largely down to EA Sports acknowledging that Brian O'Driscoll was probably best rugby player in the world at the time.

The Irish squad consisted mostly of players in the 80s when it came to ratings (apart from David Humphries strangely being rated 91 when Ronan O'Gara, our starting 10, was 87), but Drico was not only given a star above his head so you knew where your key player was at all times in a match, but he was blessed with a 99 overall rating, the highest possible for a video game sports star.

We dusted off our copy of Rugby 06 to have a look at his stats and find out exactly what made him a 99 overall. Here are our findings. 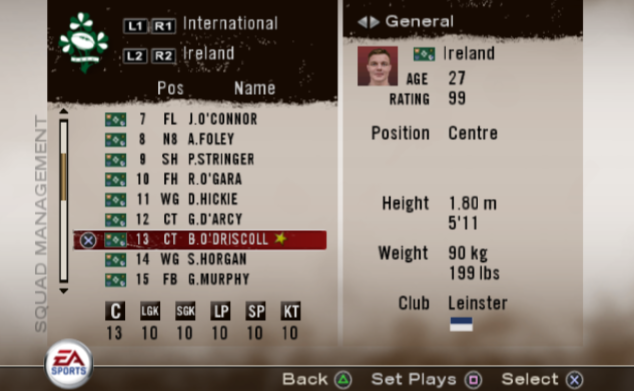 O'Driscoll was legitimately one of the very best players on the planet, and the 99 rating was given only to himself, Shane Williams, George Gregan, Johnny Wilkinson, and Tana Umaga.

His 'Special Abilities' were actually a tad unkind to him. 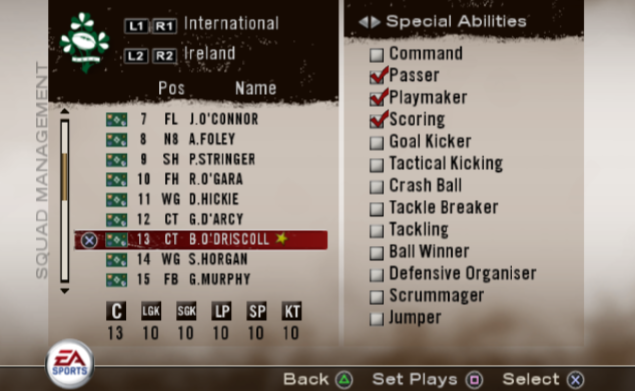 Yes, three very handy special abilities to have in the game, but just those three!?

The stats that did the damage. 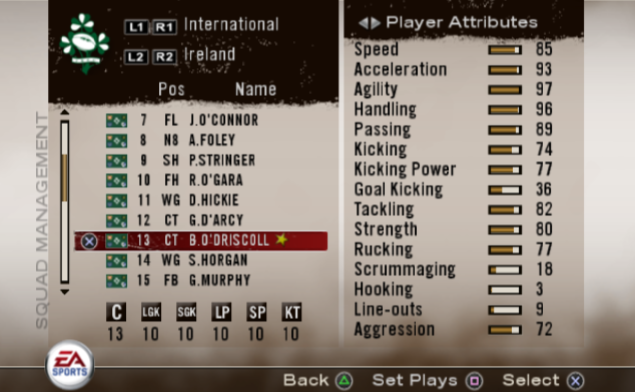 This is where you see what set O'Driscoll apart in the game.

EA Sports Rugby games have, historically, rewarded players for running in zig-zag patterns up and down the pitch like a madman, and 97 agility certainly helped with this.

96 handling ensured that he would never knock the ball on, and the 93 acceleration made it a piece of cake to slice through the opposition back-line.

Again, it seems as though his tackling and defensive work was underrated, but there was literally no higher overall rating he could have received, so...

As for how he played, well we're sure you remember how effortlessly he found himself over the gain-line, but if not, it basically looked like this:

From the half-way line to the 22 in about three seconds. If you gave the ball to him twice inside the opponent's half it was a try.

Real Brian O'Driscoll was great, sure, but virtual BOD, or EA Sports Rugby 06 BOD to be precise, was almost comfortably the best ever Irish virtual athlete. 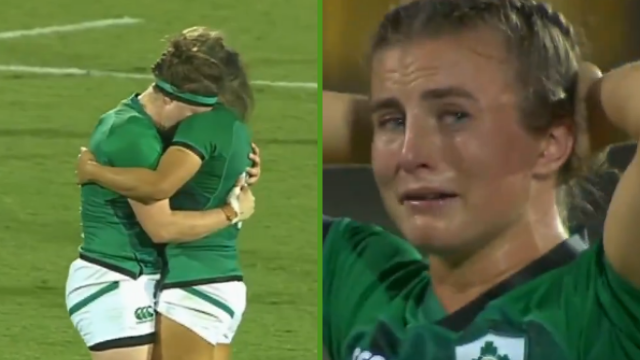 Gaming
3 weeks ago
By Balls Team
8 Reasons Why 'This Is Football' Was The Unsung Hero Of Football Games
Gaming
3 weeks ago
By Balls Team
The Ireland Squad From FIFA 2005 Was A True Thing Of Beauty
Gaming
3 weeks ago
By Jonathan Byrne
A Tribute To Rugby 05 - One Of The Greatest Rugby Games Ever Made
Popular on Balls
Basketball
6 hours ago
By Eoin Harrington
Kieran Donaghy And Tralee Warriors Claim National Basketball Cup Title In Tallaght
Rugby
6 hours ago
By Colman Stanley
Michael Lowry Backs Up Farrell's Faith In Him With Superb Display For Ulster
Rugby
10 hours ago
By Colman Stanley
Jimmy O'Brien Announced His Arrival On The Biggest Stage This Afternoon
GAA
10 hours ago
By Eoin Harrington
Watch: Outrageous Score Helps Ardscoil Rís To Dr Harty Cup Victory