Last year, FIFA 19 brought in a revamped way to customise your tactics and lead your team to victory. Last year, we devised a plan which swept the floor with FIFA players the world over. However, with a new game comes new mechanics and new ways to win, so last year's tactics just won't cut it.

Of course, each player will have individual approaches to the gameplay. The tactical outline in this piece can serve as a guide with regard to team setup and approach. Moreover, the distinct tactical breakdown can be tweaked to suit your unique game. The seven sections that you can use to customise your team are: Defensive Style, Defensive Width, Defensive Depth, Offensive Style, Offensive Width, Players in Box, Corners, and Free Kicks.

These tactics are best suited to a three-man midfield with a narrow shape. We've plumped for a 4-3-1-2, allowing the CAM to drop into the midfield if needs be. 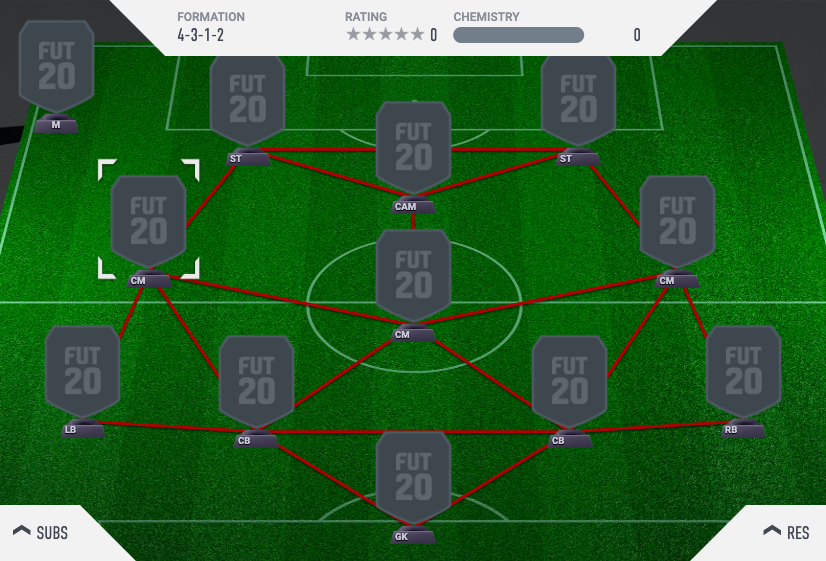 There's a bit of variety that can be had when choosing this formation. The midfield three could include three box-to-box midfielders with either defensive or attacking sensibilities or it could include a sitting midfielder and become a borderline 4-1-2-1-2. How the team is setup is entirely up to you.

Let's get onto what tactics you should use.

You have a few options when choosing your defensive style on FIFA 20. These include drop back, balanced, pressure on heavy touch, pressure after possession loss, and constant pressure. Having found ourselves at the mercy of relentless counter-attacks at the start of the game cycle, we've plumped for a 'drop back' style of defending.

This will allow you to absorb pressure that the opposition is applying. Having pacy players in midfield and attack will help to spring counter-attacks on unsuspecting opponents. Having two defensively sound centre-halves will also help in that regard.

Playing a narrow formation such as 4-3-1-2 will mean that width is at a premium to begin with. That being said, if you narrow your defensive width, the opposition will be forced to go down the sides of your defence in order to eek out opportunities.

With a slider from 1-10, with '1' being narrowest and '10' being widest, any number below 5 should play into our hands. By making the middle of the pitch congested, the hope is that the opposition will over-commit and thus lead to opportunity.

We're going to go for a three on the scale here, so our two centre halves can man-mark a two- man strike force and allow the midfielders to become extra men should they be needed.

Having already waxed lyrical about the virtues of dropping deep in this game, its not surprise that our defensive depth will be at its deepest, going for '1' on the slider.

Of course, this tactical choice will allow for the opposition to have space to crack off long shots. However, if you manage to restrict the opponent to shots outside the box, you'll take that all day long.

Now, moving onto the attacking side of the game. With such a narrow formation without much natural width, you're dependent on finding naturally occurring gaps in the defence. There are a few options that you have when dealing with your offensive style. These include: fast build-up, possession, balanced and long ball. With our defensive tactics in mind, plumping for 'fast build-up' will give us an opportunity to get the jump on opposition attacks transitioning into their defensive shape

Again, playing with a narrow formation means that there isn't natural width in the team. That being said, with 'offensive width', you can urge your players to spread out across the pitch when in an attacking phase of play.

On the 1-10 slider, we've again plumped for a '3'. However, this aspect is down to personal preference. If you want your team to continue to seek out space in the middle of the pitch, keep the slider to under '5'. If you want your midfielders to spread out onto the wings in order to cross the ball in, go with over '5'.

This option will allow you to control how many of your players you want to get beyond the play and get into the box. It's again done on a slider system, and is specifically designed for when you're crossing the ball.

Here's one aspect of the custom tactics which we're not being particularly conservative. Our slider reaches above '5' in order to get a decent amount of players in the box to attack the ball. However, leaving a spare man on the edge of the box should be able to curtail the threat of a counter-attack. We've gone for an '8' here.

Rather than a slider of 1-10, corners go on a slider of 1-5 in order to auger how many players you want in the box for the set-piece. In this instance, we want a decent amount of players in the area, yet still leaving a spare man free to deal with the threat of a counter-attack.

Free-kicks have a new mechanic this season. If you're within shooting distance, chances are that you're going to have a blem at goal, with the chances of a rebound fairly slim. Free-kicks also seem susceptible to the counter-attack, so having a few more spare men should deal with that threat.

For free-kicks, we'll go for a '2', just to be on the conservative side.

Of course, there's no ready-made custom tactic which will see you hit an eSports level of FIFA skill. However, it is imperative that you constantly tweak your custom tactics until you find a plan that works best for you. This set of custom tactics is just one such way to play the game, but it can certainly help you on the road to success.