FIFA 19 is here, and players all over the world are getting used to the new features that are part of this year's game. The inclusion of the Champions League and 'house rules' mode have garnered the most attention, but the revamp of the custom tactics section is perhaps the most influential change in the entire game. So what are the best FIFA 19 custom tactics?

Well that largely depends on the style you use on the pitch. FIFA 19 gives you more control over tactics than ever before, and this means you can really tailor your team to your philosophy on the game. This includes both the defensive and offensive aspects of the game, and you really now can control every part of your team's performance on the pitch.

There is an in-depth guide to each possible option over fifauteam.com, but we will outline what we think is your best options below.

It is worth noting that these tactics may not work all that well for you, but they can be a good base for you start with. From here you can modify them to best suit your style of play.

The below tactics are best suited to a formation with a three man midfield and three forward players. It is up to you as to how much width you would like.

Personally, I prefer to have my three forward players quite close together. For that reason, I use the 4-3-2-1 formation. 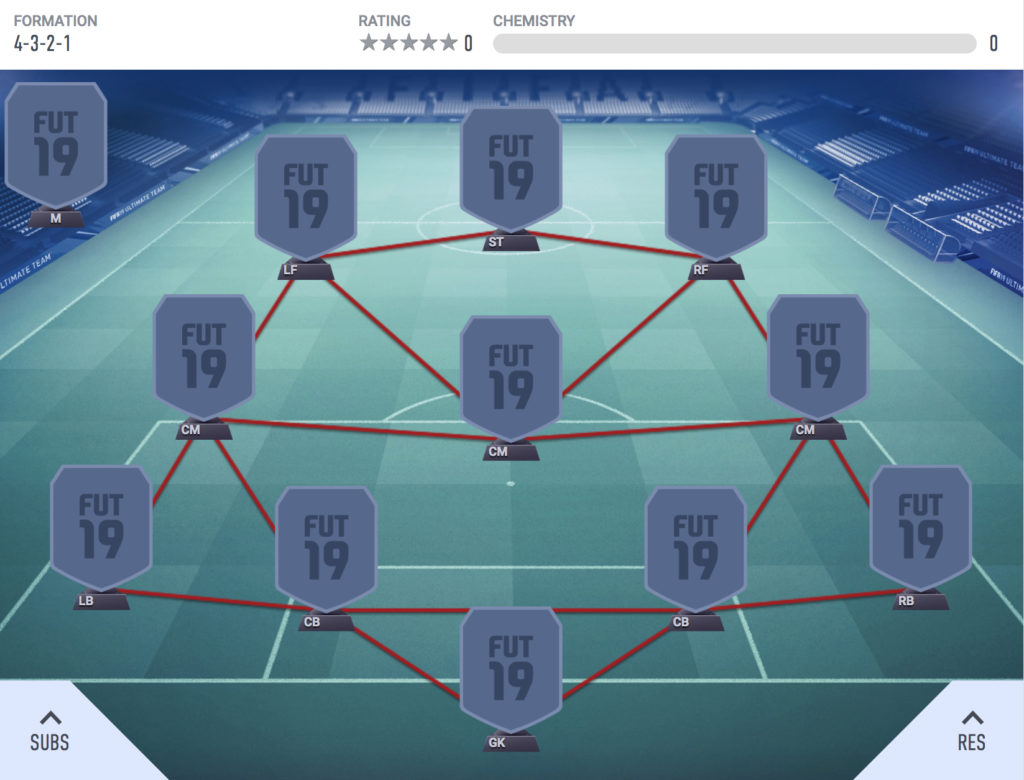 This should offer you solidity in midfield and the opportunity to have a dynamic attack up front. You can also mix and match the types of midfielders you use to give you a more complete engine room.

So with that out of the way, let's get on to what tactics you should use.

For defensive style, you have five options: drop back, balanced, pressure on heavy touch, press after possession loss, and constant pressure. 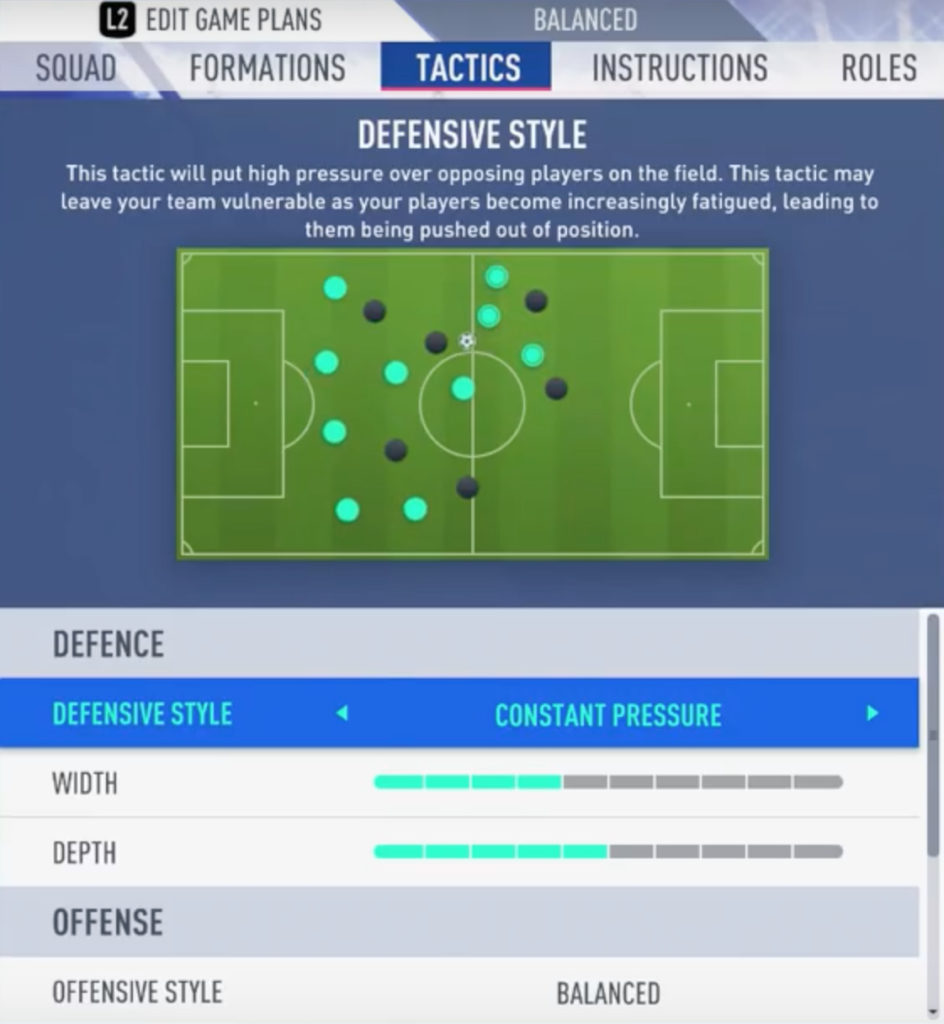 If you want to play a high pressing style (as a large proportion of players do), you need to select press after possession loss or constant pressure. From here it just depends exactly how committed you want to be to the press. The more you press, the more you potentially leave your side open in midfield.

Personally, I think it is best to go all out and choose constant pressure.

Having tested out both options, it seems that doing so would not really leave you any more susceptible to your opponent's attacks, as a three man midfield are usually well able to cope. The rewards are also worth it if you can nick the ball off the opposition defence high up the pitch.

You can adjust width of your team when defending with numerical values ranging from 1-10, with one being the narrowest and 10 having the most width.

As we have all learned playing football, a tighter defence means less space for your opponents to get through.  However it is also dangerous to leave too much space down the wing, especially against pacy wingers on FIFA.

For that reason, somewhere in the 3-5 range should do the trick. That should allow few enough spaces in your back four, without giving your opponent free reign down the wingers.

Similar to width, depth is rated on a scale from 1-10, with one being the deepest and 10 being the most advanced. If you leave your defenders too deep, you will invite pressure from your opponent. Similarly, placing them too high up the pitch could leave your vulnerable in behind.

If you are using pressing tactics, you need to have your players reasonably high up the pitch in order to be effective. For that reason, your depth should be in the 5-8 range.

Obviously this may leave you susceptible to runs in behind, so it may only be suitable if you have quality defenders.

There are four offensive styles to choose from: possession, balanced, long ball, and fast build up. Again, what best suits your team will depend on your style of play.

The team will stick to their positions until the time comes to make a run, and it should give a sense of solidity to your team. Too much fluidity, coupled with a pressing style, could leave you over-exposed at the back.

This one also scaled 1-10, with 10 offering the most width. This one is largely down to personal preference.

Personally I prefer to have my three forwards close together at the edge of the area, and the full-backs to offer the team some width. If that is what you're going for, somewhere in the 4-6 range should do the trick. 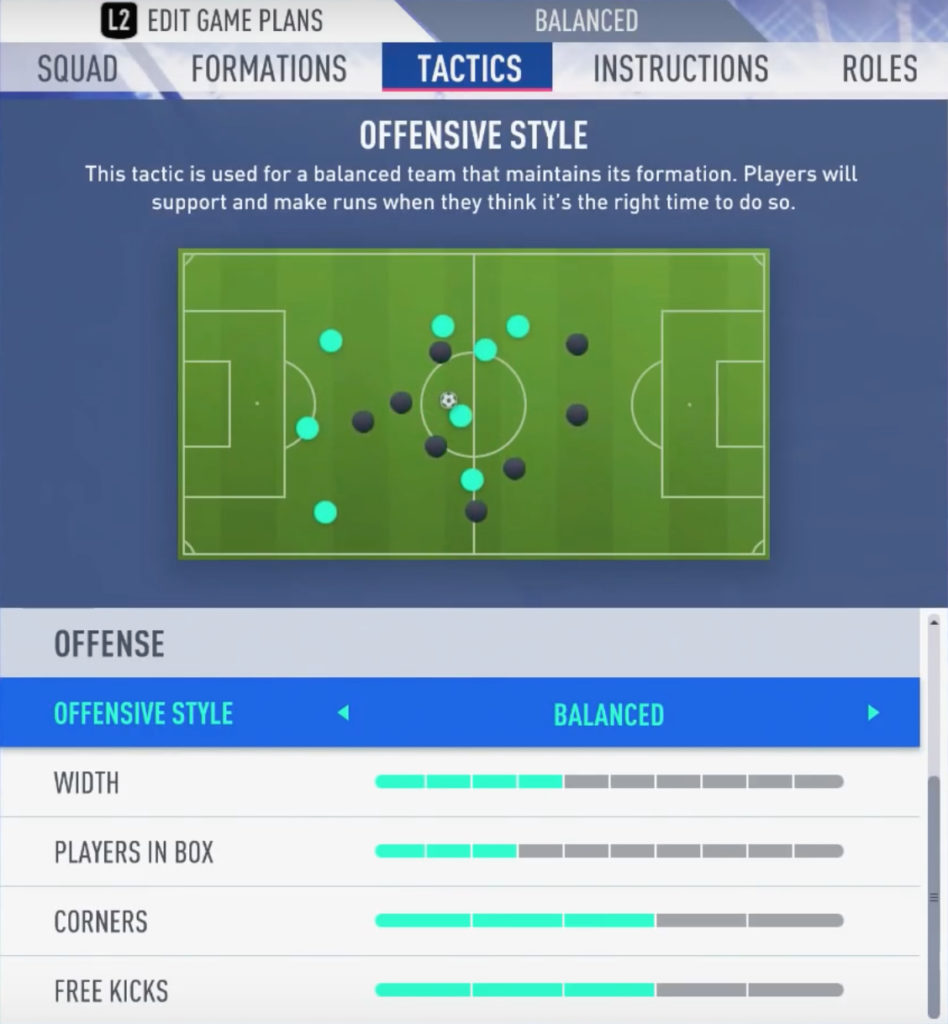 As you might guess, this will determine how many players will pile into the opposition penalty area during your attacks.

I try to leave a decent amount of space in the box to turn and try some intricate passing moves, so overloading the box is not really an option. For that reason, I would recommend staying in the 4-6 range once again.

This setting allows you to adjust the number of players that enter the box when taking a corner. It is scaled from 1-5, with five having the most in the box.

If you prefer taking short corners, a lower setting would be most suitable. You should also be careful not to commit too many forward and leave yourself exposed at the back, which is why I would recommend setting it at 3. Obviously if you are chasing a goal late in the game, you should adjust this to commit more bodies to the attack.

This has the same principles as the corners tactic, also with settings ranged from 1-5. Again it is nice to have a bit of balance between attack and defence here, which is why you should place it at 3.

So there you have it, the best FIFA custom tactics. As mentioned earlier, this may not be to everyone's tastes. You will probably need to play around with the various settings and see what best suits your game, but the tactics above may not be a bad place to start.

Gaming
6 days ago
By Gary Connaughton
Five Irishmen Feature In The Top 1,000 Players On FIFA 21
4