Call Of Duty: Modern Warfare players will be happy to hear that the mid-season update hass arrived today. The update features a new weapon, gunfight map and game modes for users to enjoy.

A New Gun To Play With

A new gun was teased all the way back at the begining of season 5 and with today's update we finally learned what it is.

The new gun is a light machine gun (LMG) called the FiNN LMG. Like previous mid-season weapons such as the Bruen, the FiNN will have to be unlocked by completing an in game challenge or by buying a blueprint for the weapon from the in game store.

This season's challenge is more straight forward than most with users only being required to get one melee kill in seven matches to unlock the new weapon. The new weapon comes with a quite ridiculous seven barrels to choose from in the gunsmith.

The new update also brings with it some new game modes for both Modern Warfare and Warzone players.

In Warzone, players can try out King Slayer, Activison descibe this as "large-scale Team Deathmatch on Battle Royale where teams fight to earn points by defeating hostile players." In this mode the circle doesn't close in but instead moves around the map while each of the top five team’s top scoring players are marked as a ‘king’ on the map. Eliminating the king will give your side extra points and reward you with a free killstreak.

For fans of Groundwar, Infinity Ward have added a new mode called Reinforcements Inbound. This tweaked version of groundwar is similar to Domination in that three flags are positioned across the map with the twist that if you or your teammate is downed you won't respawn until your teamates capture a flag. If a team succesfully captures all three flags they win the round. 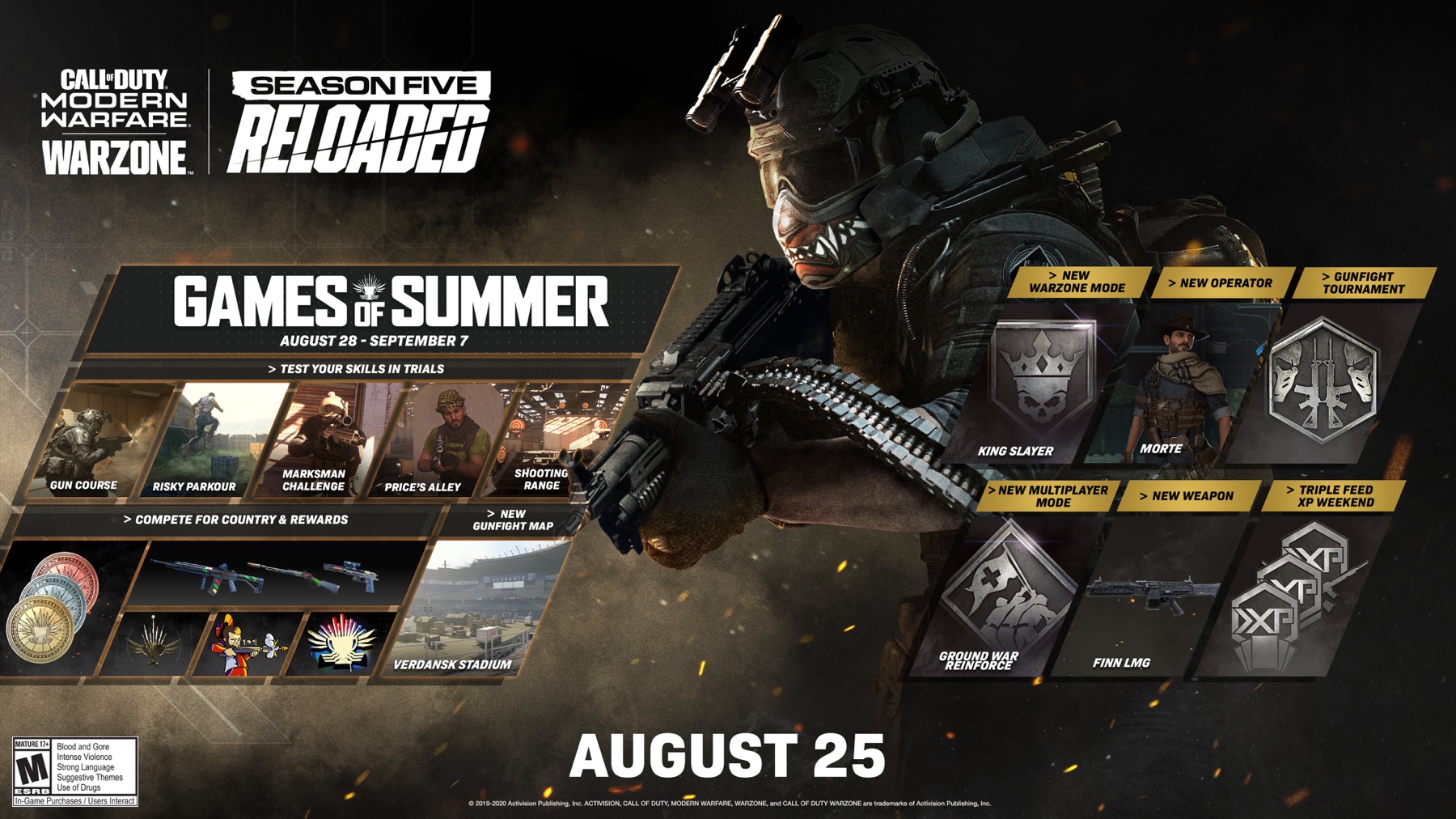 The Games Of Summer

Call Of Duty Games Of Summer will allow both Modern Warfare and Warzone players to represent their country in single-player trials of skill.

Games of Summer is made up of five trials similar to those added to the game previously. Speaking about rewards, Activision said:

Each Trial medal comes alongside rewards (rewards can only be received once) and all players who participate earn the ‘Games of Summer Cup’ weapon charm. Trials rewards include but are not limited to vehicle skins, XP tokens, vehicle horns, calling cards, and Legendary weapon blueprints.

Earn gold in each Trial and receive the Legendary Assault Rifle Juliet Blueprint, a weapon truly built for chasing first place on any leaderboard, they added.

Individual medals will be added to each player's respective country with the top 15 countries being visible on the in-game leaderboards.

The Gunfight Tournament has returned as part of the Games of Summer promo alongside a new gunfight map. The new map is the pitch area from the stadium in Warzone which could prove to be a bit chaotic.

All players are able to join in on this gunfight tournament even those who only play the free-to-play Warzone during the free Access Weekend from August 28 to September 2. 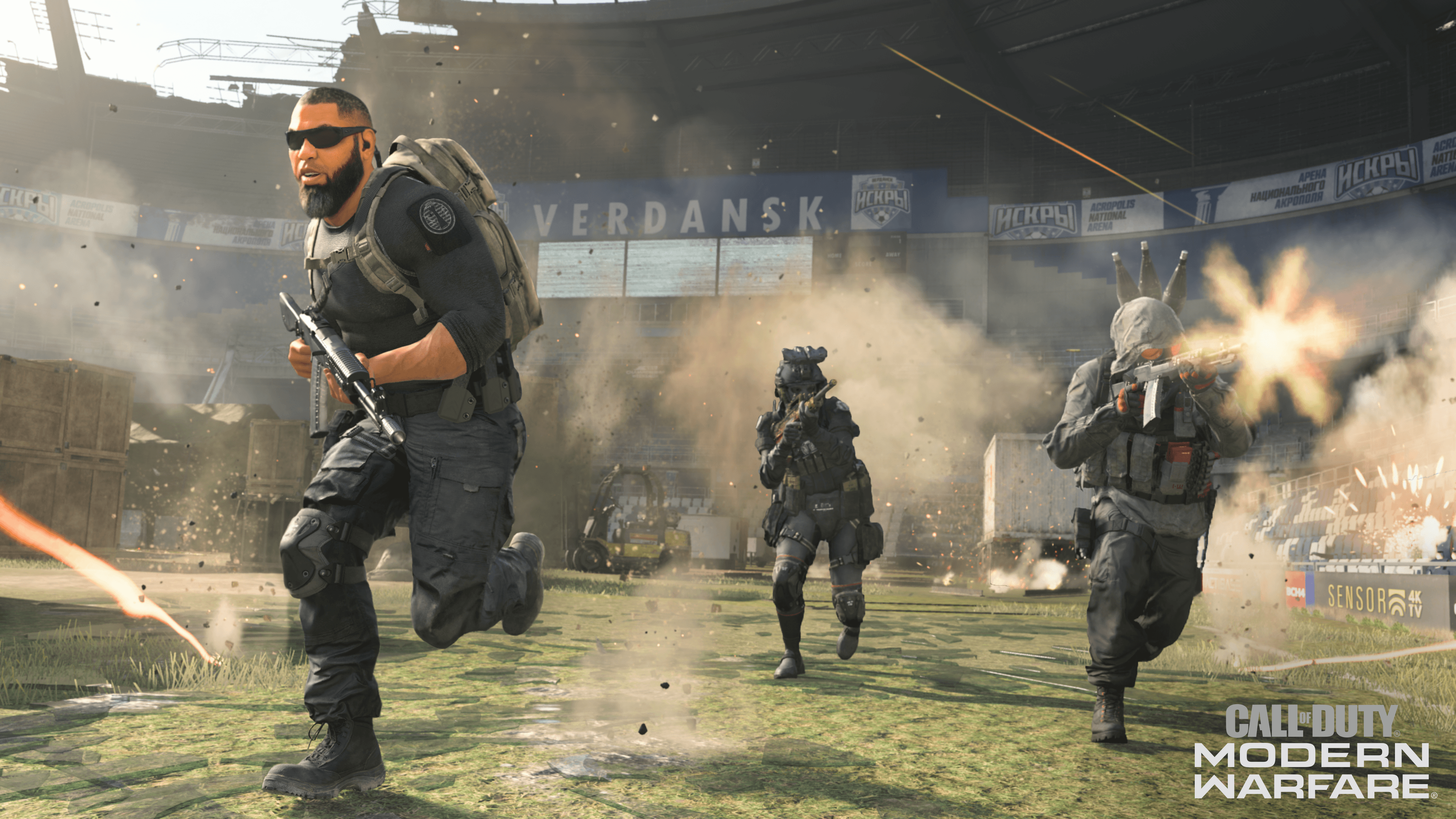 A New Operator And Shoot The Ship Is Back

The new update adds a new operator which players can purchase in the in-game store. The operator is Italian and called Sergio “Morte” Sulla, and loves wears a cowboy hat. What's not to love?

Fan favourite game mode Shoot The Ship has also returned, so grinding out the new LMG just got a little easier. Full patch notes for today's update can be found here.

Gaming
1 year ago
By Jonathon Lynam
Everything We Know About 'Call of Duty Black Ops: Cold War'
Gaming
1 year ago
By Jonathon Lynam
Some Big Changes Are Coming To 'Call Of Duty: Warzone' Tomorrow
Gaming
1 year ago
By Gary Connaughton
The Size Of The Latest COD Warzone Update Is Driving People Mad
Popular on Balls
GAA
1 day ago
By PJ Browne
The Draw Has Been Made For Tailteann Cup Opening Rounds
GAA
2 days ago
By PJ Browne
Donal Óg Cusack Defends Dublin Hurlers After John Mullane Criticism
The Rewind
3 days ago
By Eoin Harrington
Watch: Brilliant Dermot Morgan Dublin Segment From 'The Travel Show' Resurfaces
Football
3 days ago
By Eoin Harrington
Alan Shearer Says Roy Keane "Ran Away" From Him After Famous Clash