It's that time of year when FIFA 18 Ultimate Team players can log on every day over the Christmas period to find special rewards and Squad Building Challenges, and EA SPORTS have been very generous when it comes to the utterly beautiful Andrea Pirlo card that just became available in-game.

Firstly, if you look at the Weekly Objectives in FIFA 18 Ultimate Team, you will notice that you get a free untradeable FUTMas Pirlo card for completing three assists with lobbed through-balls in Online Singles Matches, a wonderfully Pirlo way to unlock Pirlo it must be said.

You can use this 82 rated festive card if you wish, but really you should be trying to complete the 'End Of An Era' Squad Building Challenge to unlock a quite frankly majestic 91 overall rated Andrea Pirlo.

Do to so, you'll need to give away that FUTMas Pirlo, and a team featuring one player from AC Milan, Inter Milan, Juventus, and two players from Italy, in a squad that has a team overall rating of 83 with 80 chemistry.

It's a very doable SBC, and the reward is this glorious version of Il Maestro at the very peak of his powers. 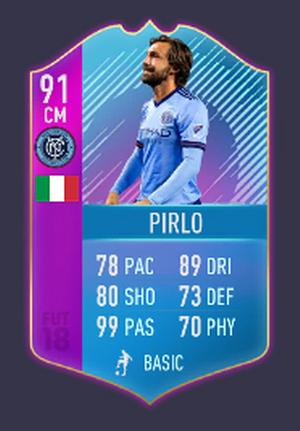 It looks like an absolute dream to use in midfield, with a 78 pace rating which is perhaps generous for a man who had positioning so good that he never needed to sprint, and some of his in-game stats are just incredible.

In terms of passing stats, this 91 Pirlo can boast 99 curve, crossing, and free-kicks, to go with his 99 ball control and composure. Other stats that stand out are 93 shot power, 97 short passing, and 96 long passing.

It's easy enough to complete, so if you're a fan of Pirlo, which you probably are, there's no excuse not to get him in your Ultimate Team and enjoy him over the festive period.

Gaming
3 weeks ago
By Balls Team
8 Reasons Why 'This Is Football' Was The Unsung Hero Of Football Games
Gaming
3 weeks ago
By Balls Team
The Ireland Squad From FIFA 2005 Was A True Thing Of Beauty
Gaming
3 weeks ago
By Jonathan Byrne
A Tribute To Rugby 05 - One Of The Greatest Rugby Games Ever Made
Popular on Balls
Basketball
21 hours ago
By Eoin Harrington
Kieran Donaghy And Tralee Warriors Claim National Basketball Cup Title In Tallaght
Football
1 day ago
By Gary Connaughton
Carragher Reveals Unhappy Instagram Message From Lionel Messi After MNF Comments
The Rewind
1 day ago
By Gary Connaughton
Quiz: From Which Irish County Did This Company/Product Originate?
GAA
5 hours ago
By PJ Browne
Tiernan McCann Decision Part Of Worrying Trend For Tyrone