FIFA 18 is here and there is nothing quite as exciting as starting a fresh campaign of Ultimate Team, testing out new players for your club going forward.

The more matches you play, the more coins you will make to spend on your squad, unless of course you would rather will inject their team with FIFA points from the outset, allowing them to bypass playing as many matches as you can to increase your transfer budget.

To make quick and easy coins, download the FIFA 18 Companion App for your mobile, login in on a daily basis to receive daily prizes, e.g. coins or packs, this also applies to to their desktop version, Web App.

Before we delve into the transfer market, go to the EA Catalogue and with the currency that you have accumulated, buy the biggest coin booster than you can purchase and unlock coin boosters of 200 or 1,000 coins. You will receive these after every match that you complete.

Now we can delve into the market for our players.

The key to this is, buy players with well-rounded statistics because you want to be able to compete against players who have spent money on their squad or who are seasoned expert traders.

The players that we have selected are to help you get your side up and running until you can make some upgrades. 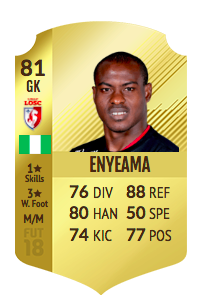 Enyeama is a penalty saving specialist but unfortunately for him he has been frozen out of the Lille team by manager Marcelo Bielsa. His reflexes are a whopping 88, handling is 80, so it is a no brainer to start with him in nets for 700 coins 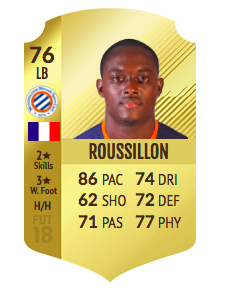 We could have gone for PSG's Layvin Kurzawa for 900 coins but Roussillon caught our attention because of his 86 pace. His defending may not be outstanding but his passing and dribbling are solid to make us purchase him for 1,300 coins. 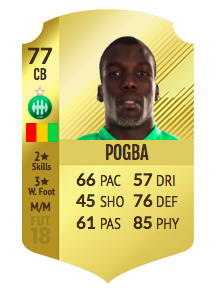 There is a dearth of good centre backs in Ligue 1 but again they will be outside of your price range initially so we stumped with Florentin Pogba. Although his pace is 66 and his defending is just 76, it is his physicality which caught the eye at a whopping 85. Pogba should have no problem in knocking players like Mbappe off the ball and valued at 1,200 represents a decent bit of business. 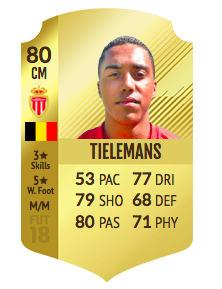 There is a lovely selection of wide players in Ligue 1 but unsurprisingly they are out of price range, so we have decided to go for a diamond in midfield. Youri Tielemens may not be the quickest but his technical attributes are just what is needed. Passing 80, shooting 79 and a five star weak foot makes the Belgian good value at 1,000 coins. 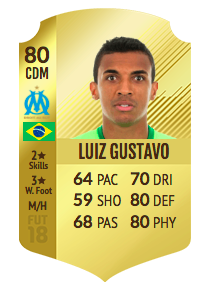 One of the more underrated players in FIFA 17, Luiz Gustavo represents a bargain in your midfield at 1,400 coins. At six foot one, he may not score many goals but the Brazilian will break up so many attacks of the opposition with his sheer strength and power. 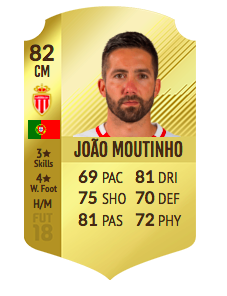 Another technical player to add to our side is Joao Moutinho. The Portuguese won't beat many players  but with he will pass around a team with passing stats of 81, add in his defensive and physical stats, we have got a reasonably good player to play with. 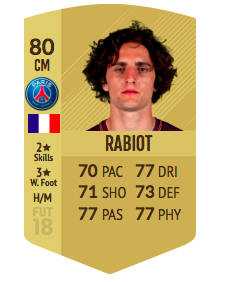 Rabiot is now a permanent fixture in PSG's starting team and although the stats on his card above are nothing special, it is a reasonabe balanced card. Dribbling, passing and physicality are all rated 77, Rabiot is good temporary solution to your side until you free up some funds. 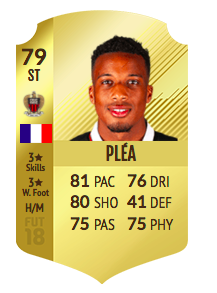 Nice's Alassane Plea is valued at 1,500 coins and Kylian Mbappe may only be rated 83  but he is currently valued at 115,000 coins and thus well and truly out of our price range. Plea fits the bill, with pace of 81 and shooting of 80, the Frenchman can supply the goals you need until Edison Cavani may become available.