FIFA 20 Team Of The Week 10 Is An Absolute Blockbuster

Lots of people bemoan the international break, saying they interrupt the flow of the club season.

Now, those people are wrong, make no mistake about it, but they're allowed to live their lives with their mistakes in tow. International breaks are brilliant, not least because the whole country bands together like no other time. But they're also brilliant because, without fail, they always produce brilliant a Team of the Week on FIFA, and this week is no different.

The star of the show in Team of the Week 10 is undoubtedly Cristiano Ronaldo. The Piemonte Calcio star was in stellar form for Portugal, scoring a hat-trick in their 6-0 defeat of Lithuania on Thursday evening. He notched another in their 2-0 win over Luxembourg on Monday, taking his international goal tally to 99.

Also in this jam-packed TOTW is Harry Kane. Although his club may be in turmoil, the England captain had another brilliant international break. He played just 57 minutes in England's 7-0 romp against Montenegro, but managed in that time to score a hat-trick. He also managed to get an assist and a goal in England's 4-0 away to Kosovo. His goalscoring exploits over the window saw him move above the likes of Tom Finney and Alan Shearer as England's sixth all-time leading goalscorer.

Another attacker, but certainly a marquee one, can be found in this TOTW. Eden Hazard's woes at club level haven't impinged on his ability to turn it on for Belgium. The tricky winger scored twice as Belgium won 4-1 away to Russia. He took it easier in the next match against Cyprus, playing 64 minutes as Belgium destroyed the Cypriots 6-1.

Team of the Week 10 Starting XI 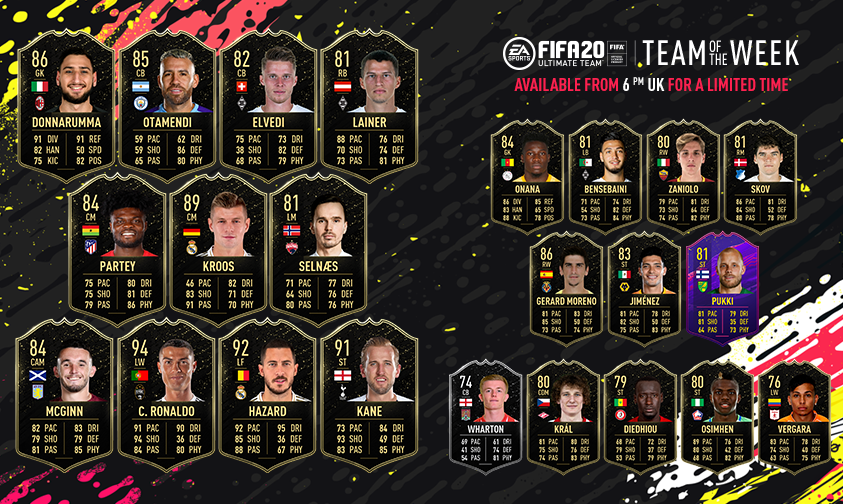 SEE ALSO: 7 Teams To Start Your Adventure With On Football Manager 2020

The Rewind
22 hours ago
By Gary Connaughton
Quiz: Can You Defeat The Beast In This Final Round Of 'The Chase'?
Other Sports
20 hours ago
By Balls Team
Dublin's New Decathlon Sports Store Is A Completely New Shopping Experience