We've been tricking about with the beta version of Football Manager 2016 (released this Friday) and needless to say, we've been having a lot of fun.

One of the new features on the game is the 'Football Manager Create a Club' mode, which allows you replace any club in the game with a made up team and then do a sort of fantasy draft, buying players for a set price. Basically you can buy whoever you want but the total value of the squad must not exceed the value of the real club you're replacing. Don't worry, it'll make more sense as we go on.

Obviously, when presented with this opportunity, we did the same thing any other sane person would do; set up Cavan FC and try to win the Champions League.

My plan was to pack my team full of wonderkids and golden oldies. Given that most of my signings would only be 16 or 17, I decided that the best option would be to start out in the Championship rather than the Premier League. Therefore I decided to replace Derby County in the game. Their squad value was £84m, so I cut all the players bar Richard Keogh and set about building a new squad.

The first problem I encountered was that you can't have a team located in Cavan play in the English league, so unfortunately we had to relocate to Barnsley. In truth we could have relocated to anywhere in England but Barnsley felt like a place Cavan people could relate to.

Other than that, everything else is exactly like real life.

My plan to buy both wonderkids and legends worked a treat. I didn't buy the most expensive youngsters like Tony Martial but instead shopped around for bargains. Legendwise, I decided to go for Didier Drobga, Robbie Keane, Carlos Tevez, Dimitar Berbatov and of course, Paul McShane.

Also, it goes without saying that the first player I bought was Jonathan Walters. 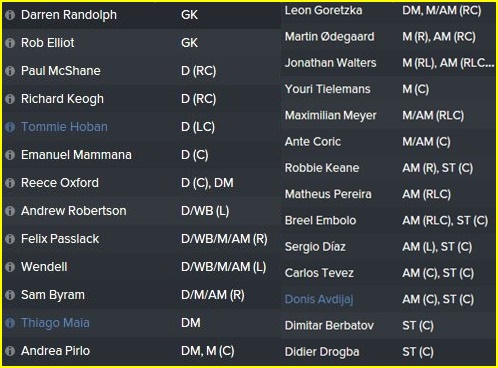 By the way, I tried to sign Cillian Sheridan but the Cypriot league isn't in the game and sadly it seems neither is he.

While I was frugal  in the transfer market - like any Cavanman would be - I discovered a major problem as soon as I clicked the 'confirm squad' button. The game interface loaded and I suddenly realised I hadn't taken the wage bill into account.

Even more annoying was the fact that just a couple of players were at fault.

As my season unfolded I would discover that while Pirlo was worth every penny of his £99,000 a week, Keane and Drogba were a massive waste of money. The fact I also owned Carlos Tevez and the Berb would have hinted at this, should I have actually stopped for a second to think.

A 1-1 draw with Bolton. Hardly inspiring.

However there was some good signs that this team might do something. Pirlo had got the equaliser but the real star of the show came as no surprise.... 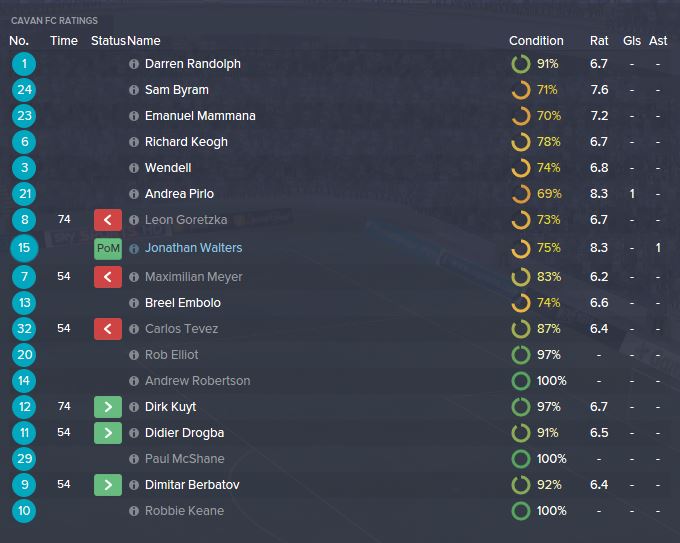 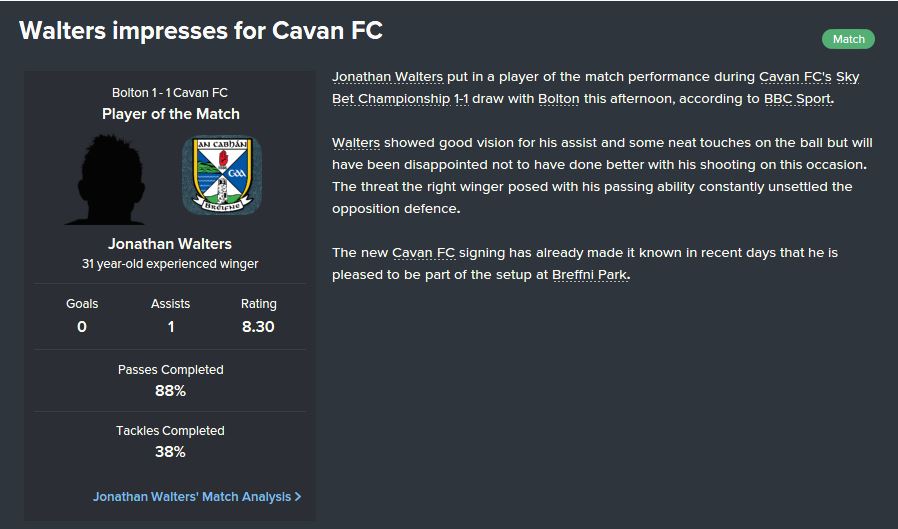 Despite the 1-1 draw moral was high within the camp. We were confident we could put in a strong performance against Charlton in our first league game in Breffni Park.

From the first whistle, the lads looked confident.

Of course he did. Goals from Carlos Tevez, Breel Embolo and the Berb would ensure a 4-1 victory.

A 7-1 win in our third match meant we were really suckin diesel now! From then until Christmas we went on a serious run. The good times were back in Cavan. This was 1947 type stuff!

While our success seemed inevitable it was coming at a price. Robbie Keane and Paul McShane were not getting a look-in. Even more heartbreaking was the fact that Jonny Walters' place in the team was coming under threat.

I had to sit the lads down and explain that they just didn't have the quality to force their way back into the side. The youngsters were beginning to come good.

However, one Irishman who stood strong in the face of competition from within, was Richard Keogh. The only surviving player from the club formerly known as Derby County, he seemed to relish playing alongside the likes of Pirlo and Darren Randolph.

The Championship is easy, buddy!

Let's cut to the chase. We weren't just good, we were pure class hye. No one could touch us! 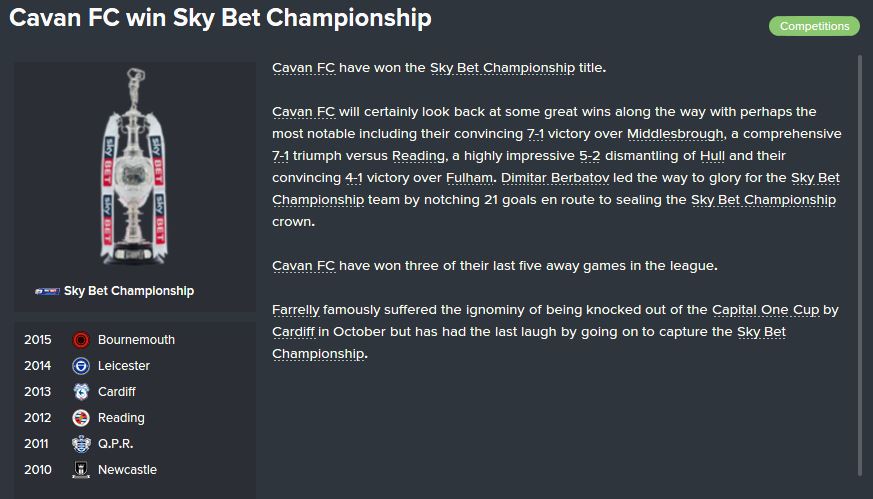 Manager's note: Was it really necessary to point out my Capital One Cup defeat to Cardiff City? The pricks. They couldn't let me have this one moment without throwing in a sly dig.

With the league in the bag, the awards start to swarm in. First of all we had the club dinner dance in the Riverfront Hotel in Virginia. A great night was had by all. 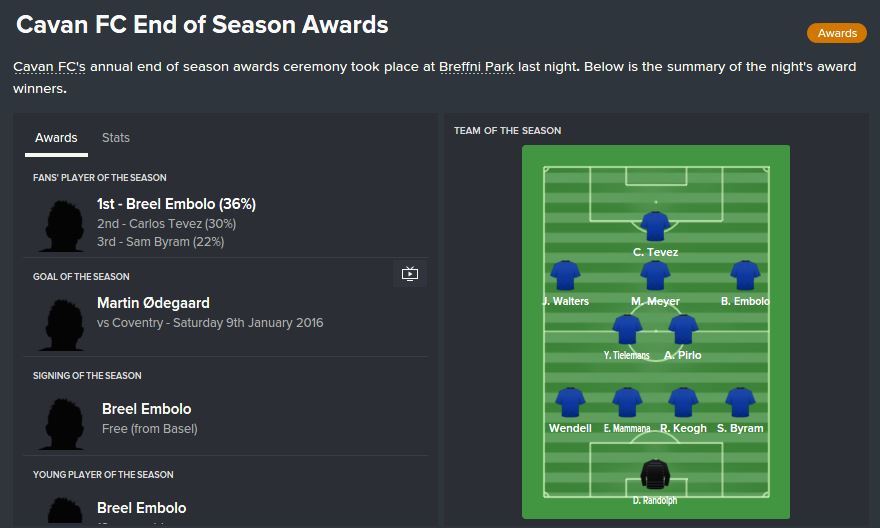 Some serious Football Manager advice here folks: buy Breel Embolo. He is fantastic. So good that he easily won the Championship's Young Player of the Year award.

Embolo told me that he had learnt a lot from some of the senior players in the squad. Mostly notably Jonny Walters and Carlos Tevez. The Argentinian was immense in his own right.

He was unsurprisingly named Player of the Year.

So with a Championship title in the bag, not to mention the two individual player awards, I eagerly awaited the announcement of the Football League's recognition of my own achievements.

Taking a new club to the Premier League was no mean feat, however writing my acceptance speech was almost as testing. After countless sleepless nights I finally had my final draft and off I went to acce....

What kind of shite is this!?

Such nonsense. At least Carlos Tevez appreciated my I suppose. What a nice young man.

Despite the fact that the club's financial projections look like this...

... they've decided to go ahead an expand Breffni Park anyhow. An ill-advised expansion of Breffni Park. That would never happen in real life!

On a more serious note...

While my Cavan FC experience has been a great one to date, I have unfortunately cursed the career of Robbie Keane. His inability to force his way in the starting team has ended up costing him a place in Martin O'Neill's squad for Euro 2016.

What can I say? I'm sorry Robbie. You should have stayed in LA.

So there you have it. Now you're up-to-date on Cavan FC's first season in English football. Our quest for the Champions League continues and we've been boosted by the fact that Andrea Pirlo has decided to stay on for one more year.

Can Pirlo guide Cavan to glory? Come back next week for the latest installment in this earth-shattering saga.

Gaming
3 days ago
By Jonathon Lynam
Some Big Changes Are Coming To 'Call Of Duty: Warzone' Tomorrow
Gaming
2 weeks ago
By Jonathon Lynam
Watch: First Look At Halo Infinite Gameplay
Gaming
2 weeks ago
By Mark Farrelly
The World's Maddest Football Video Game Will Soon Be Free To Play
Popular on Balls
Football
7 hours ago
By Gary Connaughton
Juventus Vs Lyon Featured Two Of The Worst Penalty Calls You'll Ever See
35