The Telegraph have today published a comprehensive simulation of a 48-Team World Cup on Football Manager 2017.

The system is set up to emulate what FIFA have laid out regarding group structure and knockout stage format, and the teams were chosen using the rankings by each federation.

The tournament is made up of the 48 highest ranked sides in their respective federations, divided up in the same proportions as the 32-team 2014 World Cup, but increased to include 16 more nations.

Of course, in reality there is a decent chance of even lower-ranked sides qualifying, but even with this format countries such as Curacao, Haiti, Uzbekistan, U.A.E and Burkina Faso make the World Cup finals.

With two of three teams making the knockout stages, it becomes extremely rare for a big name to fall at the first hurdle.

Thankfully, Ireland made it in, although let's hope we're not one of the big names to fall at the first hurdle...

Ireland were drawn in Group A alongside Ghana and the hosts U.S.A.

A tough draw pitting us against the home nation in a frenzy of soccer fever, and one of the stronger African sides in Ghana, but expectations were high, with Eamon Dunphy even going as far as to say it would be shambolic if we did not advance.

Football doesn't even exist in America, Darragh, it's "soccer" there, so if we can't get a win against them we would want to have a good hard look at ourselves.

And as for Ghana, I don't know any of those players, so they aren't good. They haven't been any use since they lost Essien.

Up first was Team USA Men's National Team, at prime time, live from the Rose Bowl in California where of the 100,000 fans in attendance, somehow 45,000 of them were Irish.

With just four minutes on the clock, Shane Long pounces on a shocking backpass from DeAndre Yedlin and slips the ball under Brad Guzan. 0-1. 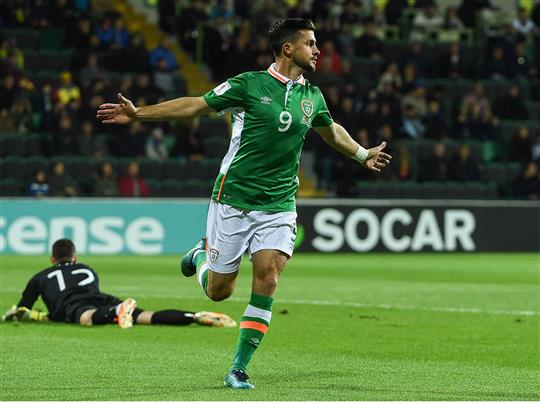 But then the inevitable happens, and Ireland completely panic with an early lead. The monotonous drones of 'USA. USA. USA.' drive the Americans forward like robots and they grab their deserved equaliser just before half time through Borussia Dortmund's Christian Pulisic. 1-1 at the break.

Ireland come out looking like an actual football team again in the second half and after some terrific work from Seamus Coleman down the right wing, James McClean arrives at the back stick to put Ireland 2-1 up with roughly 20 minutes to play.

The crowd quickly turns on the Americans, and chants of 'YOU SUCK!' similar to the ones once thrown at Kurt Angle back in his WWE days leave the players visibly downtrodden. Apart from a half-chance that fell to Fabian Johnson, the US can't muster up a shot and Ireland hold on for a massive win. James McClean putting in the shift to end all shifts and reducing Yedlin to tears at the final whistle.

With a huge win already in the bag, Ireland know that a win against Ghana will send them through, and give the tournament hosts a chance to fight for survival in the final group game.

But it all goes arseways.

Slack marking from a corner in the 28th minute allows the frustratingly Irish-sounding John Boye to go unchallenged and head the 'Black Stars' into the lead. To make things worse, James McCarthy is shown a second yellow card just minutes later after being burned by the pace of Andre Ayew, and the boys in green are down to 10 men. 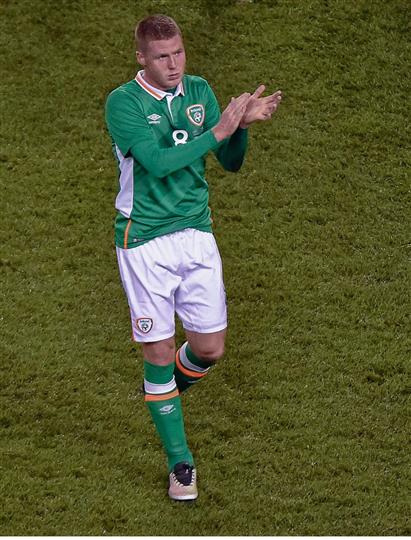 The second half kicks off and Ireland are properly going for it. With the team pushed up higher than anybody watching from home is comfortable with, Ghana strike a hammer-blow on the counter through Christian Atsu, what is it with all these fecking Christians scoring against us?

With the score at 2-0 with 15 minutes to play, all looks lost. But then, a ray of hope, in the form of Shane Long leaping like a salmon to power home his second goal of the tournament. Game on?

No, game over, a damaging 2-1 loss. After the game Eamon Dunphy scolded the Irish team selection before continuing to praise our opponents.

Ghana wanted to win that game, to send a message. There's been a lot of nonsense spoken about their ability and now I wouldn't be surprised if a number of the big clubs in Europe came sniffing around.

This means that Ireland must sit and hope that Ghana avoid defeat against the USA, despite being already through to the next round and resting players.

Ireland know that if the USA win by two clear goals they advance with Ghana to the next round, and Ireland are going home. After Wales secured their passage to the next round earlier in the week, WalesOnline.co.uk published a provocative article claiming that Ireland would be the laughing stock of the tournament.

Ghana field a weakened side, and our worst fears become reality after Jozy Altidore bundles the ball in off his arse following a goalmouth scramble just 20 minutes in.

The next 65 minutes of football are pure torture. The USA are throwing everything but the kitchen sink at Ghana, and Ireland are counting their lucky stars as the post twice saves our bacon, but then in the 85th minute, after a sloppy pass from Jermaine Jones, Aston Villa's Jordan Ayew writes his name in Irish folklore by skinning two players and audaciously chipping Brad Guzan. 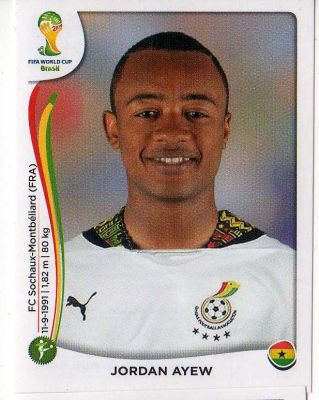 Posters are designed, t-shirts are printed, Jordan Ayew is awarded the freedom of Drumcondra.

According to The Telegraph's detailed simulation, the group stage was a bit shite apart from our group of death:

There are some particularly forgettable group stage games, with Algeria vs Curacao, Peru vs China, Iceland vs Saudi Arabia, Iran vs Haiti and Australia vs Tunisia all taking place in the first round. Argentina vs Holland is the only real blockbuster.

Typically, England struggle through a very favourable group with a win and a draw against New Zealand and Ecuador. They then meet Switzerland in the first knockout round.

So England got the Swiss, and Ireland would be drawn against Group B winners Turkey.

CenturyLink Field in Seattle is the setting as all the lads on a J1 head north and all the Irish living the goodlife in Vancouver head south, Ireland dominate the Turks in the stands.

But Ireland are dominated on the pitch for the first 20 minutes, and once again a first-half goal is conceded. Burak Yilmaz scores despite being a good two yards offside following a through ball from Hakan Calhanoglu.

Outrage. We have absolutely no footage to show you, but trust us when we say it was one of the most disgraceful decision ever made. We need to respond.

At half time Roy Keane and Martin O'Neill tear into our boys and we come out like a team possessed. Shane Long goes close, Jon Walters is off the bench and giving Omer Toprak nightmares at the back, but the standout performer is James McClean.

The Derry man was a constant outlet, taking on defenders and whipping in crosses, and with 20 minutes to go he looks to be clean through onto the end of a Long flick-on, before he's taken out by the visibly rattled Toprak.

30 yards out. Ball slightly to the right of the Turkish goal. Robbie Brady steps up... 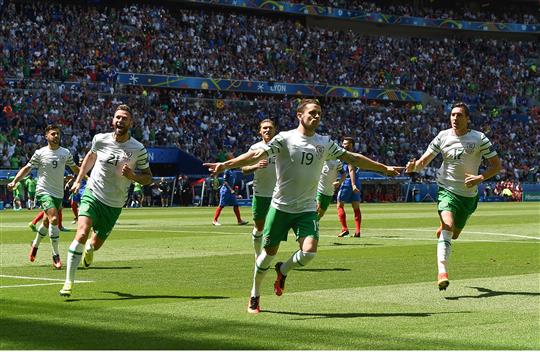 Ireland have drawn level, so naturally there's only one thing to do now... Panic.

Ireland immediately drop criminally deep and wave after wave of Turkish attacks crash over us as the fans peek through their hands while praying for penalties... But we just couldn't do it.

Hakan Calhanoglu’s curled effort after 82 minutes proves to be the winner for Turkey, and Ireland are going home. 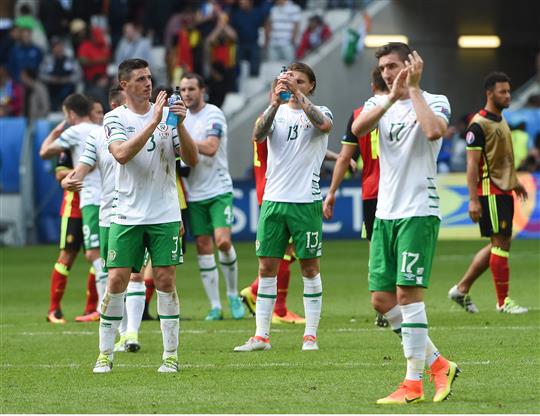 The Rest Of The Tournament

The Irish fans determine that America is absolutely no craic without Martin O'Neill's men in the tournament, and head for Mexico to continue to the session until long after all the other nations have flown home.

As for the rest of the, now mundane, World Cup, here's how it played out according to The Telegraph:

The biggest team to fall in the last 16 is Wales, who are beaten 3-0 by Brazil.

England make it as far as the quarter-finals before being knocked out by Argentina by a 2-0 scoreline. Predictable stuff.

The Argentines also see off Senegal, Chile and Italy on their way to the World Cup final.

There they meet France who, led by Antoine Griezmann (as this tournament is set in the present day, not with a load of made up Football Manager players from the future), beat Tunisia, Australia, Japan, Ivory Coast, Belgium and Germany to get there.

France beat Argentina 2-1 in the final to win a second World Cup, putting to bed their demons from the Euro 2016 final defeat to Portugal on home soil.

Wales return to a parade through Cardiff, while England have announced a total upheaval at the FA and a complete restructuring of their footballing philosophy from the grass roots level. Everton's Ross Barkley has his jersey burned by fans outside of Wembley, despite not being picked in the squad for the tournament.

Antonine Griezmann of France scoops player of the tournament honours, while Leo Messi finishes as top scorer with 5 goals.

We came, we had fun, we went home. The 48 team world cup sounds pretty much like all the rest of them.

[via Telegraph.co.uk, and special thanks to the Football Manager social team for informing us of the Irish data from the simulation.]

Gaming
1 week ago
By Jonathon Lynam
Some Big Changes Are Coming To 'Call Of Duty: Warzone' Tomorrow
55