PES 5 Inter Milan Vs FIFA 06 AC Milan - Who Wins In The Greatest Virtual Match Ever?

It's time to settle this once and for all.

There was a time when your allegiance to a football game, your side in the bitter, bitter rivalry, saw you socially judged on your answer like the Oasis/Blur of the video game arena.

Pro Evolution Soccer vs FIFA was a war in which some had a side and would fight passionately whenever someone suggested the other game was superior, and those who just played them both and enjoyed them the same, and while some just played them both and enjoyed them equally, the sales and general popularity shift between titles suggested that they both had moments when they were king.

Both games had years when they were the game everyone was playing, and back then with online multiplayer scarcely available, 1v1 battles sitting side-by-side was the way to decide who got the bragging rights. With every new game came a new best team to play with in it. Sometimes they were so good that they had to be banned, others liked to play the same team against each other for a level playing field, but thinking back now, there are two teams that really stand out as being the absolute dog's bollocks.

In Pro Evolution Soccer 5, the legend that was, is, and forever will be Adriano was more of a mythical God than a virtual football player. His supporting cast, man for man stars in their own right, made Inter a complete pisstake. There was a real argument to make PES 4 AC Milan the best PES team ever, but Adriano was the deciding factor.

Over on FIFA, there is one side that stands out as the most ridiculously balanced side of superstars ever seen. From back to front, FIFA 06 AC Milan were perfection, with every player being up there for the best in that position in the game, the diamond midfield was dominant, and the strikers were ruthless.

So let's have a look at both sides, their strengths and weaknesses, and determine which side would have come out on top if some sort of Frankenstein bastard of a football game hybrid became available and these two could go at it. 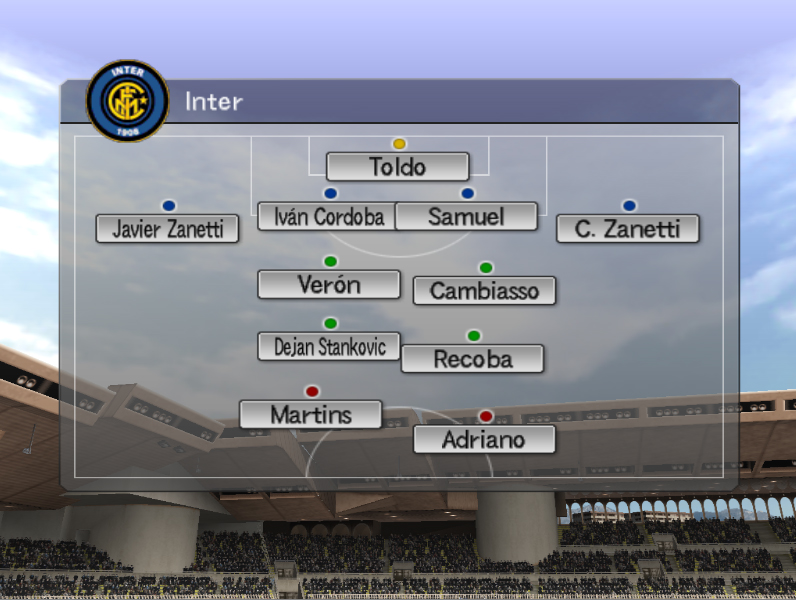 Toldo between the sticks was as solid as you could ask for, and the backline had the perfect balance of pace and strength in the Cordoba/Samuel partnership, while Javier Zanetti did absolutely everything, and his unrelated brother Cristiano had all the tools to pass out from the back, even if he was played slightly out of position.

The midfield was so enjoyable too, as Cambiasso did the dirty work while Veron played from deep, Stankovic could score from anywhere, and Recoba had the guild to thread a ball through to the strikers...

And the strikers are what really set this team apart. Not only was Adriano the greatest virtual footballer of all time, but Martins was the ultimate partner with his ludicrous pace and finishing ability. 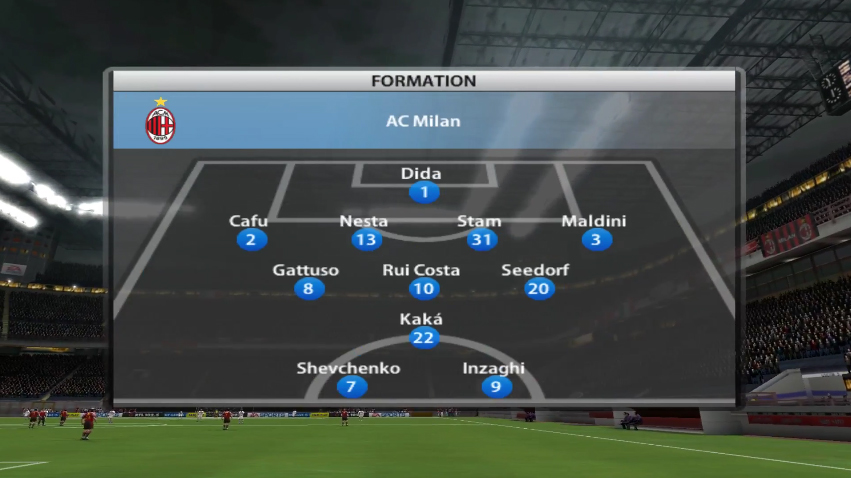 (The above should have Pirlo in for Rui Costa, although it's personal choice)

So strong in every aspect of the pitch. Dida was a freak, but the back four was simply perfection. Stam and Nesta were rocks, and Cafu and Maldini were... Cafu and Maldini!

Moving on to the midfield, what worked as more of a diamond was again just so balanced in every way. Gattuso the destroyer, Pirlo and Seedorf covering the midfield, and Kaka, and peak Kaka at that, supporting the attack.

Then you have the mercurial Shevchenko, with his 93 overall rating, and Pippo Inzaghi up top finishing every single chance that was presented to them.

The sides have been named, the formations have been chosen, thankfully the San Siro means that no side has a true home advantage, so how does it play out? 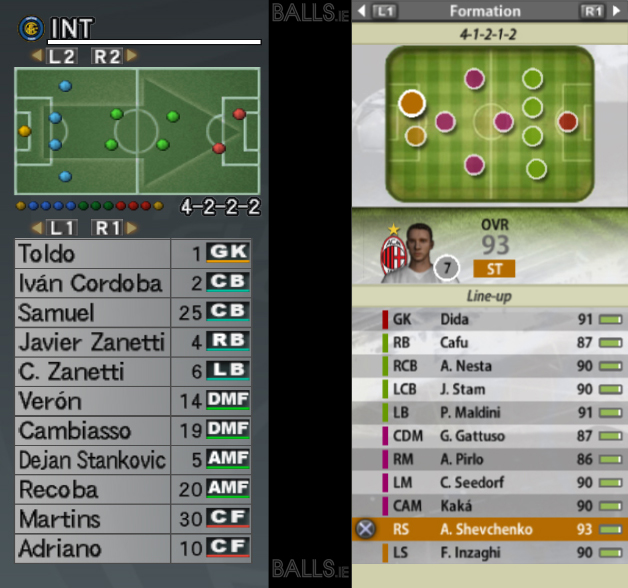 The PES players don't have overall ratings, instead they have that weird hexagon thing, but rest assured they were all massive.

The first few minutes pass by without incident, despite the best efforts of Marco Matterazzi to start a fight with Gattuso from the Inter Milan bench.

A cagey start, the game needs a goal, and then...

AC Milan temporarily forget just how bloody fast Obafemi Martins is, and Jaap Stam tries to take a touch. The Dutchman pays for this mistake by having the ball stolen by a blur of black and blue and before he knows what happened, Martins is off doing his flips in celebration.

After some magic from Juan Sebastian Verson on the ball, Adriano is left unmarked for exactly one second, which is more than enough time for him to control the pass and thump it into the top corner.

An uphill battle now for AC, can they manage to do a reverse-Istanbul of sorts?

With Inter Milan coasting, they took the foot off the gas thinking they could get into half-time with their two-goal lead intact, but some lovely footwork from Kaka presents him with a chance he was never going to miss.

Has the momentum shifted? Will AC Milan come out all guns blazing in the second half?

No, they won't is the answer to the above question, instead they will use their intelligence to control the tempo of the game, knowing that if one of their strikers gets a single chance they will draw level, and when it comes with 10 minutes left to play, Shevchenko is ice cold under pressure.

Can AC Milan push on and win it? Do Inter have anything left in the tank? Are we headed for extra time?...

Cometh the man, cometh the hour.

The Emperor, Adriano latches on to a loose ball and decides that his teammates can no longer help him. He drives right at Jaap Stam and beats him so easily that Alessandro Nesta is paralysed by fear, and even Dida can't get his giant mits to an absolute thunderbolt that finds the top corner... As they always do when you're dealing with Adriano.

He's delivered, as he always does, when it was needed the most. He must have been on an upward red arrow because he's only had two shots and scored two goals.

And there it is, PES 5 Inter Milan have emerged victorious. The pace of Martins and the godliness of Adriano proved too much, despite FIFA 06 AC Milan showing their resolve to battle back, and to keep the big Brazilian quiet for most of the match.

As always, one result does not end the debate, so vote in our poll below and tell us who YOU think is the best virtual football team of all time. Think someone other than these teams deserves to get the crown? Then get in touch and let us know who.