Watch: Pro Evo Simulates A Full Team Of Messis Vs Team Of Maradonas

The debate over who is the best footballer ever to play the game is ultimately futile, but that doesn't stop it popping up every time Lionel Messi or Cristiano Ronaldo score in a big game.

Before those two, the argument was Maradona vs Pele, two absolute legends of the game and widely regarded as the finest practitioners of the beautiful game to ever live, but since Leo Messi destroyed the "next Maradona" tag handed to every young Argentinian attacking-midfielder by being the first to come close, the two have been constantly compared.

It didn't help when Messi scored that damn-near identical goal to the incredible solo run Maradona shocked the world with against England, but debate over who was better has regularly popped up over the past decade.

Well now we have an answer. A really poor and unreliable, but funny, answer.

WorldOfPES is a YouTube channel that reguarly runs experiments on Pro Evo by modding the PC version of the game and customising it, and they put together a full XI of Lionel Messi in every position to go up against the same team, but of Diego Maradona. Prime Diego Maradona, as in the classic player you can unlock in the game.

The results made for an interesting watch, although there was naturally not much defending on show.

If you don't have the patience to watch the CPU play itself for 21 minutes, we've got some spoilers for you.

Lionel Messi is better. His side won 6-3 on the day after pulling out into an early lead. 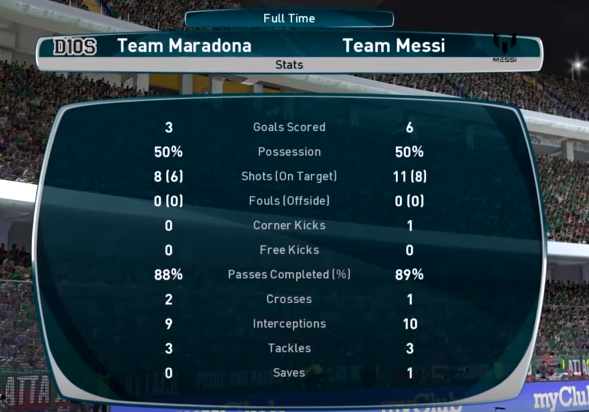 There are many other 'experiments' over on the WorldOfPES YouTube channel, and shout out to the lads from PES Universe for designing the kits for this most spectacular battle.

Gaming
8 months ago
By Balls Team
The Default Pro Evo Master League Players - Where Are They Now?
Gaming
1 year ago
By Mark Farrelly
eFootball PES 2020 Is On Sale For Next To Nothing On Playstation 4
Previous Next

Gaming
2 months ago
By Jonathan Byrne
Pro Evolution Soccer Is No More, As Konami Announce New Free-To-Play Game
Gaming
8 months ago
By Balls Team
The Default Pro Evo Master League Players - Where Are They Now?
Gaming
1 year ago
By Mark Farrelly
eFootball PES 2020 Is On Sale For Next To Nothing On Playstation 4
Popular on Balls
Golf
23 hours ago
By Jonathan Byrne
Sky Sports Ryder Cup Coverage Is Getting On People's Nerves
34