Now out on Xbox One, PlayStation 4, and on PC via Steam, Rocket League is simply the best multiplayer gaming experience available in gaming today.

I honestly feel that way.

Developed by Psyonix, Rocket League was released on Steam and on PS4 (as a free game for PS+ users by the way) on July 7th, 2015. As someone who owned only an Xbox One, I decided to wait until the game came out on February 17th, 2016. I hate myself for that decision. I should have forced it to run on my laptop, or rather, I should have bought a PS4, specifically for Rocket League.

The game is essentially football, but with little remote-control-esque cars instead of players, and a big ball bouncing around that needs to be directed into a goal. Think of when they played football with cars on 'Top Gear', except they can jump, have rockets, and don't take damage. It is one of the most satisfying games I have ever played.

Here's why, in an extremely late but extremely positive Rocket League review:

The Game Has 4-Player Local And Online Co-Op 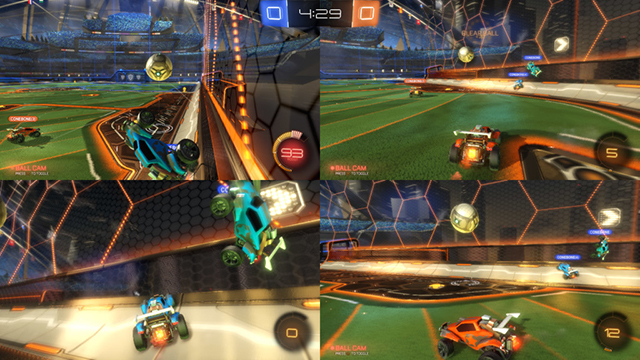 Jesus, why is it so damn difficult to play a game with my friend on the same couch? The likes of Call Of Duty and even Halo have shunned the needs of local co-op and it just isn't right. Rocket League not only lets you play four player split-screen, but you can also take that online and play on the same team, 4v4, under one gamertag.

It's So Simple To Grasp

It takes a two minute 1v1 session to explain the basic concept and controls to anyone. From there it's driving a car and trying to hit the ball. Within 10 minutes of starting you'll already think you're well able to compete.

Yet There Is So Much To Master

Some of the techniques players pull off in Rocket League would blow your mind, and will blow you mind as you play with and against them and constantly keep learning news methods and tricks. 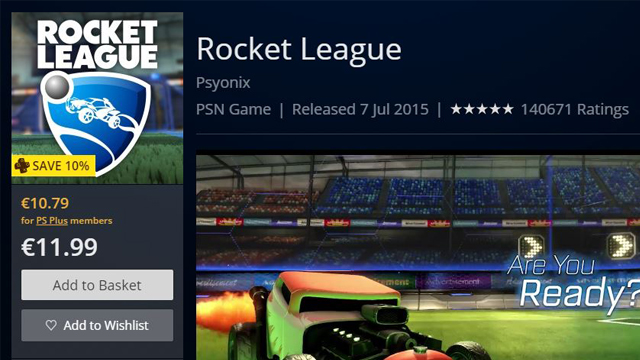 This is the best part about Rocket League, in that when you recommend the game to someone, it won't hurt their wallet. Available online via the Xbox Marketplace, PlayStation Store, and on Steam, this game is an absoltue steal, and will pay for itself on day one.

As for the price difference, it has been out far longer on PlayStation, having only recently been released on Xbox.

The Learning Curve Is Just Right

Every single minute that you play the game, you improve. Your improvement is obvious and visible, but the frustration of not initially being able to do everything you want to do keeps you hooked on trying to get better.

There Is So Much Variety In The Game 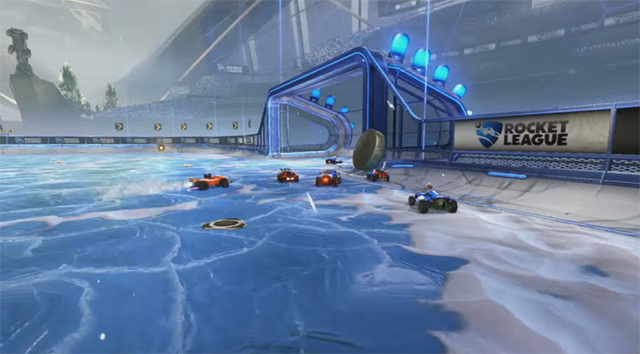 You can play 1v1 (which is an entirely different game of strategy and skill altogether), 2v2, 3v3, and 4v4 Chaos (which lives up to it's name) both online, or offline with bots. The Skill level of the bots can be adjusted as you go on.

Furthermore, the developers Psyonix released an Ice Hockey expansion game mode totally free. It is also awesome. AND, they are about to release a new Basketball expansion that looks unreal as well. So generous! 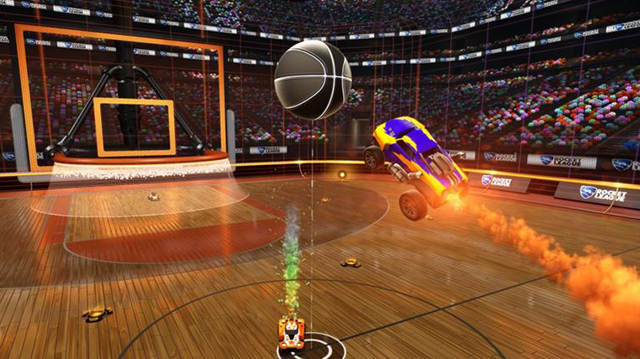 The Games Are Quick, But Not Too Quick

5 minutes is the PERFECT amount of time for a game of Rocket League. It means that you can squeeze a quick game in, even when you really don't have time to, or you can hop from game to game for hours on end with regular breaks should you need to take a pee or answer the door for a friend/delivery person.

But they never feel rushed, and the pace of the game means you always feel like you have time. If the scores are level you go to sudden death overtime, which is the most intense thing imaginable.

The Cars Are Awesome 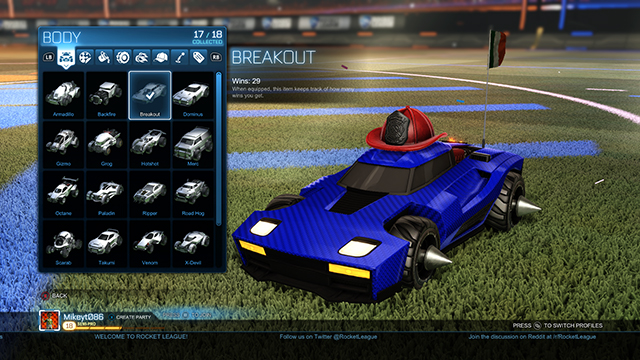 The selection of cars available is more than enough, and the best part is that there are no differences in terms of speed or contact area, which means no car has an advantage over another.

There are also special DLC cars, such as the Batmobile or the DeLorean from Back To The Future, which cost around €2.

And The Customisation Is Delightful 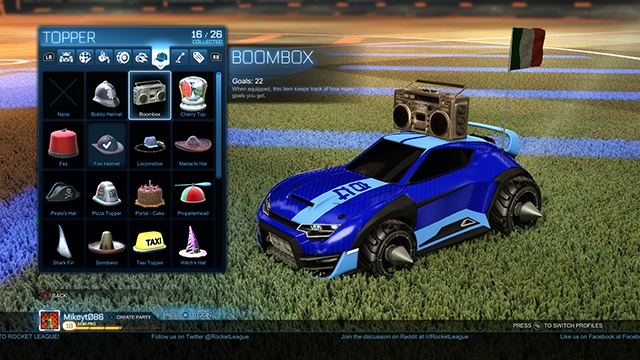 You can really let your freak flag fly in Rocket League.

The plethora of options in terms of customisation keeps you entertained as you unlock more and more accessories every time you play until you've earned them all.

The Level Design Is Slick 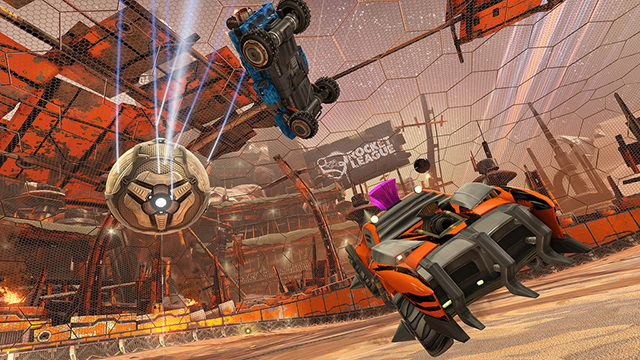 The graphics in Rocket League are beautiful, and the most impressive aspect of the game visually are it's many grand arenas. My particular favourite is the clearly Mad Maxed themed 'Wasteland', but there are numerous interesting maps with differing conditions and times of day.

The Atmosphere Is Incredible

Hearing the crowd gasp when you pull off a save legitimately makes the game more intense. For the arenas with a live crowd it genuinely sounds like they are involved in the game, and in the non-populated arenas the use of music and ambient noise makes the levels seem believable.

The horns that blare when you score in DFH Stadium are the best. 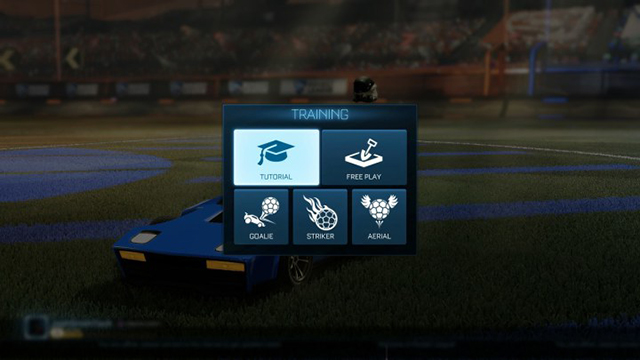 If you want to learn how to do mad stuff like flying by using boost, you can do it in the training area, so that you don't have a bunch of pissed off teammates when you fly over the ball like an eejit.

It Takes Seconds To Find A Match Online

The matchmaking is super quick, and during my time with the game I have yet to experience much lag at all. You can even search for an online game while you play the computer or mess around in an empty arena.

The ranking system, should you wish to get more competitive with things, is super balanced and extremely rewarding if you put the time in.

The Satisfaction Of A Good Hit Is Unbelieveable

Rocket League is just so much fun. When you time it right and send a long-range pop into the goal, it feels really, really good.

And So Is Blowing Your Opponent Up

If you boost into a rival car at speed you will explode their vehicle. The feeling of smugness is hard to top.

But Nothing Makes You Feel More Epic Than An 'Epic Save'

Flying in at the very last moment to deny someone the thrill of a goal is even better than bagging one yourself. Save attempts can often end in disaster but when you pull it off, you're the man. 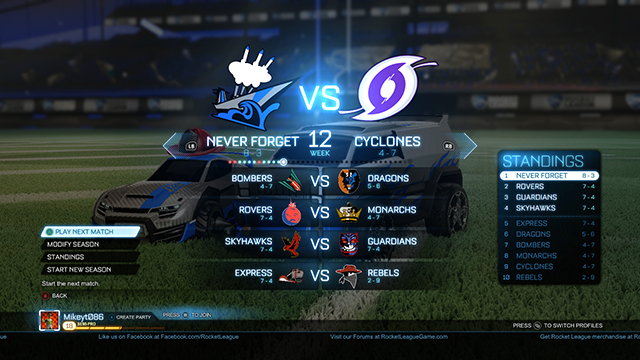 Even if you don't fancy online (you will), or want to practise against the CPU, the league system is grand. You can pick how long the season lasts, face nine other teams, and have a playoff to determine the champ at the end. Good stuff.

The 'Mutator Settings' Are Ridiculous 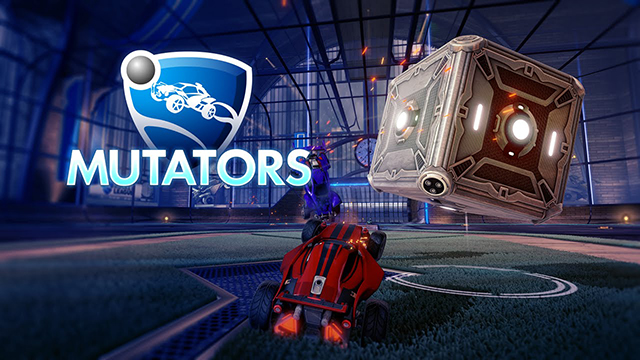 As if the incredible multiplayer fun of Rocket League as it was wasn't enough, you can mess with things like gravity, the shape of the ball (ie. a cube), and the power of boost. It is insane and very enjoyable to play with the settings mutated.

It Can Get Seriously Competitive

Whether it is against your friends, or against randomers, or against a tough opponent in a paid game (yeah, there are places you can do that), Rocket League can be an absolute nail biter.

I have had noise complaints while playing this game, and I will do again. You can help it. It consumes you.

It is also a game on the MLG circuit. 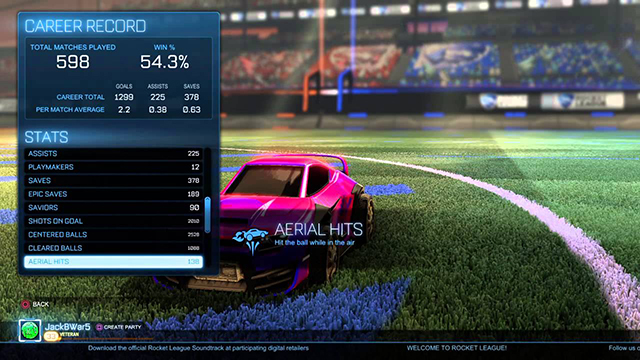 It would be such a shame if a game of this standard were to not allow you to track your progress, but thankfully that's not an issue.

I'm off to play some Rocket League.