The Top 10 Irish Sportsmen Ever Seen In A Video Game

The question of which professional Irish athlete or sportsman received the strongest digital representation in a video game is one which may have not been pondered by too many outside the offices of Balls.ie, but it's something we've discussed and debated on a number of occasions.

Before we start, it's important to note that we've kept this as factual and scientific as possible, but considering overall ratings for players in sports games only became an industry standard as late as 2006, there are some we've left out because there may have been a big fat Irish bias telling us they were amazing because we only remember the good times.

Thanks to the availability of many of the necessary databases online and the convenience of an old TV and pre-owned games for roughly €0.50 a pop, we've managed to settle it once and for all.

We decided against including the same player multiple times across different games, which in all honesty would have just been Roy Keane and Brian O'Driscoll taking up a good chunk of the top 10.

Having looked back through every conceivable sports game since the Super Nintendo, we've found the 10 best Irish virtual sportsman ever seen, they range from football to rugby, golf, and MMA, but who knows, maybe in 10 years time this list could look very different with Madden and NBA 2K in there too. Or not, anyway, let's get into it.

One player who most certainly has missed out due to his game not having overall player ratings is Tony Cascarino. He was so ridiculously powerful in FIFA 98 (especially in indoor mode) that we dedicated an entire post to beastly ways.

Blessed with speed he simply didn't have and the shooting and heading of an elite goal-getter, Cas was the standout player for Ireland, and nobody was quite sure why.

The first Pro Evo game that really established itself as the daddy of football games, PES 3 just felt differently and was infectious to anyone who gave it a go.

One of the best things about Pro Evo 3 was bombing on with Roberto Carlos all day and taking wild shots from distance because they often flew in. If you couldn't afford Roberto Carlos in Master League, then Ian Harte was basically the same thing.

Konami gave Drogheda's finest a ridiculous 96 shot power as well as 97 free kick accuracy, making him a lethal weapon from left back.

Still probably the best rugby game around, Rugby 08 was so good that it gave us all hope that EA Sports had finally nailed it and all the games would get better from here on in.. And then they never made another one.

They did make the Ireland team absolute tanks in the game, as finally they could be used against the likes of Australia, South Africa, and England, something that had not always been the case going back to Jonah Lomu.

While O'Driscoll, who will feature in this article later, was the showstopper, Denis Hickey on the wings was a flyer who got countless tries with the old zig-zag up the pitch technique.

The most recent entry in this discussion is a Team Of The Week item from Seamie Coleman's purple patch of goal-scoring form for Everton in the 2016/17 season before it ended so unfortunately and abruptly. We didn't see a Team Of The Season card, but the 86 RWB card was a hugely popular one for players using Premier League teams while playing Ultimate Team online, which is pretty much everyone. 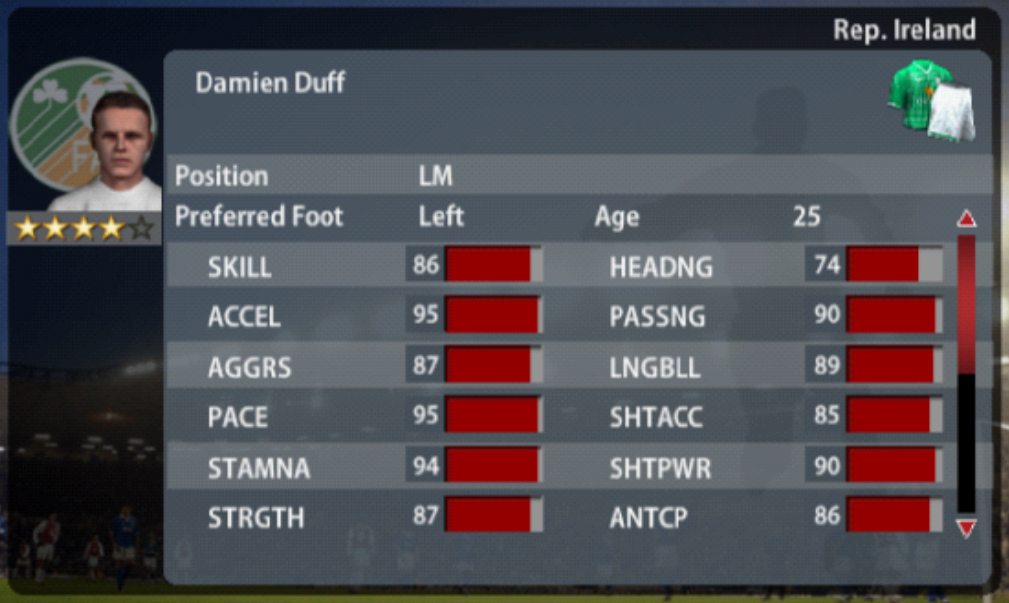 Somewhat unsurprisingly, Duffer's FIFA rating peaked in 2005 after a cracking first season at Chelsea. His 86 overall was in line with Petr Cech and Arjen Robben at the time, and ahead of his pal Robbie on 82.

In-game he was lightning quick and had fantastic stamina which meant you could abuse that pace all game long. In career mode he developed like a monster with a potential overall of 96, and was comfortably Ireland's biggest threat when played up front. 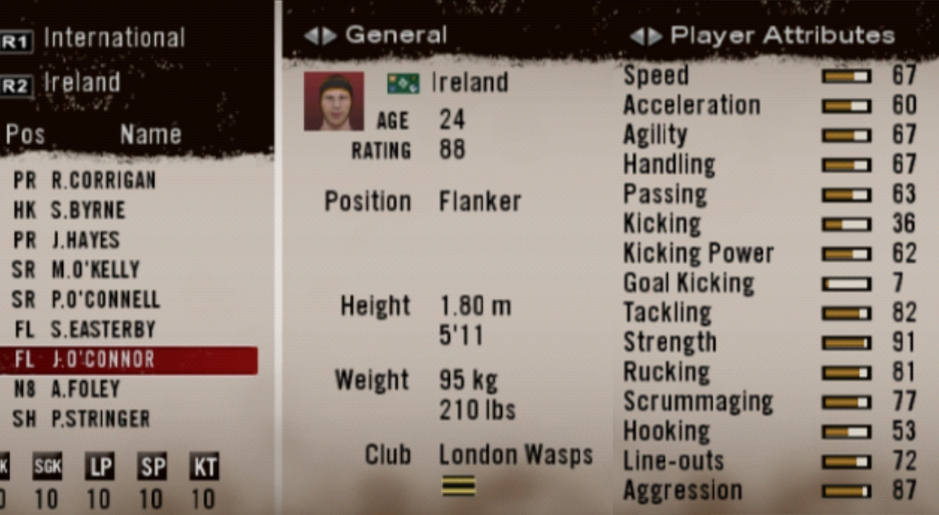 A name few would have expected when clicking into this list, or the '#9 will shock you!' tagline if we were bastards, is former Connacht and Ireland flanker Jonny O'Connor. This 88 overall rating was granted after a terrific season for London Wasps where he earned the nickname 'Johnny O'Concrete' for his knack for obliterating opponents in the tackle.

On Rugby 06 he was the elite back-row you badly needed in a game where turnovers were so important, so his lack of pace was more than made up for with his presence on defence. 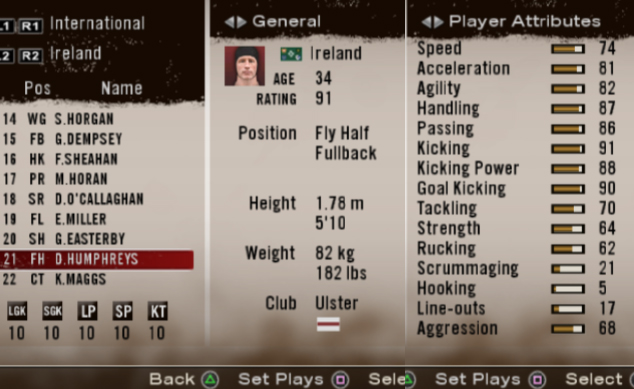 EA Sports showing Humph some love with a juicy 91 rating that was four better than Ronan O'Gara at the time. The Ulster 10 would go on to win the Celtic League with a late drop-goal against the Ospreys a few months after the game's release.

In-game, Humphreys' stats were extremely well-rounded but he was noticeably comfortable to use in the place kicking, many of which you had to kick from the corner due to abusing the overlaps. 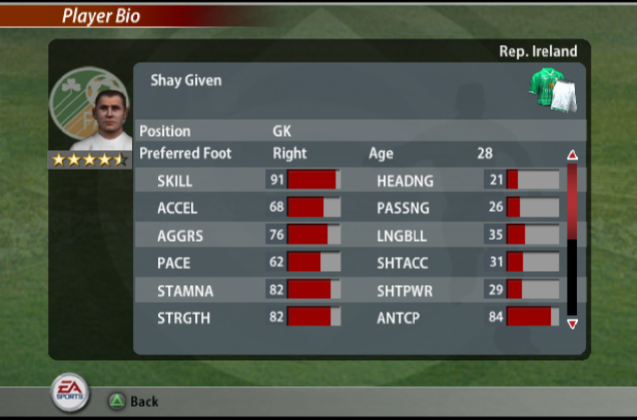 Despite not featuring at Euro 2004, Ireland were well represented in the FIFA that followed a few months after it's conclusion and boasted two 90+ players in a virtual Ireland football squad for the first and only time ever. Shay was one, you'll meet the other later.

In FIFA, Given was all you could ask for from a goalkeeper and if you could manage to prise him away from Newcastle in Career Mode his rating could grow as high as 96 like Duffer above.

The Irish defenders were not highly rated that year, so if you were playing with the boys in green it was massive to have Shay back minding the house. 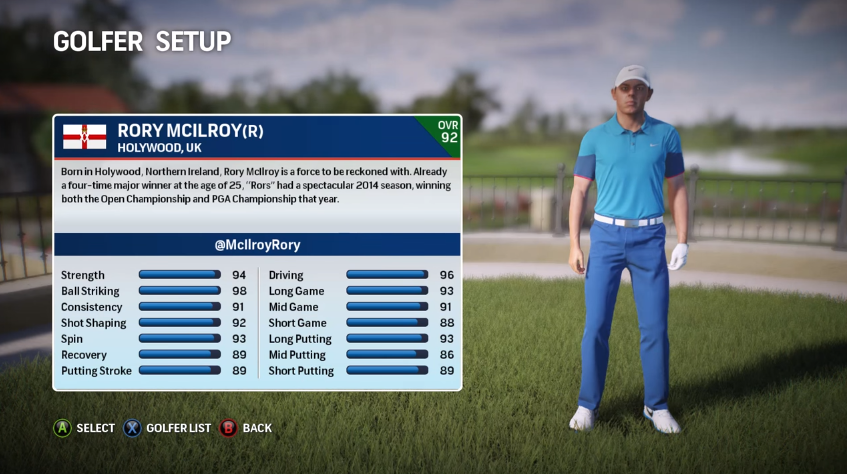 When the game is named after you, you'd wanted to be rated as high as it gets, otherwise, why are you on the cover? In 2015, EA Sports dropped Tiger Woods as the face of their struggling golf video game series and opted for one last push with the future; Rory McIlroy. Had they been offered the chance, with the benefit of hindsight, you feel they may have opted for Jordan Spieth instead.

But still, McIlroy was rated 92 overall, one better than Spieth, and thus was the only player you would pick if you were going head to head with a mate.. Who would then pick Spieth. It really could have been Rory Vs Jordan: The Game, and it may have been more interesting. 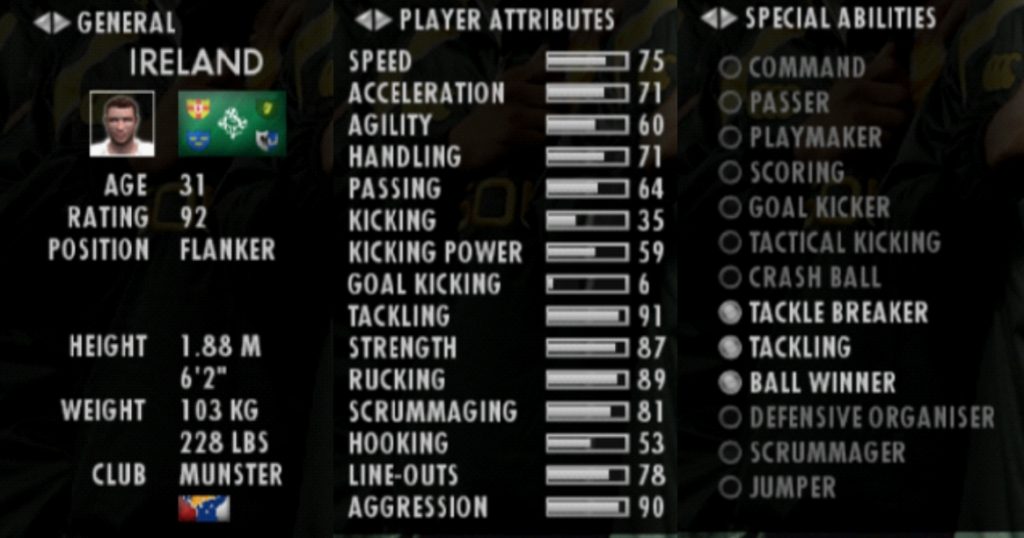 Recognition! Rugby 08 is, for many, still the best rugby game to this day as you got the feeling it was made by people who truly knew the sport. The ratings were a lot more detailed than ever and as a result you saw guys like Wallace, who may not be the biggest names in the sport, acknowledged as players who win matches.

He was a one man ruck-winner, a turnover with every tackle, and his 'tackle breaker' trait made him a weapon on offence as well. That Ireland team was the first you could really use against any opponent in a rugby game, and Wallace was a big part of it. 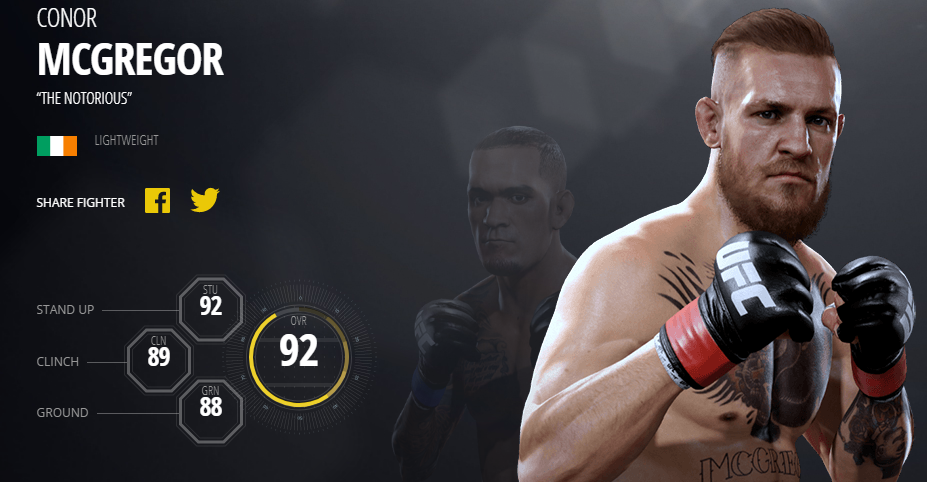 When the next EA Sports UFC game comes out, you can imagine there will be absolute war if McGregor is not 99 overall, Dana's face will go all red, it will be a whole thing. But pre-Aldo fight, the UFC could get away with leaving The Notorious seven points short of the maximum.

But it must still be said that McGregor is one of the most devastating fighters in the game, with striking power and an array of extravagant kicks that make him so powerful most fights have to be McGregor vs McGregor. Jesus, imagine the build-up for that fight. 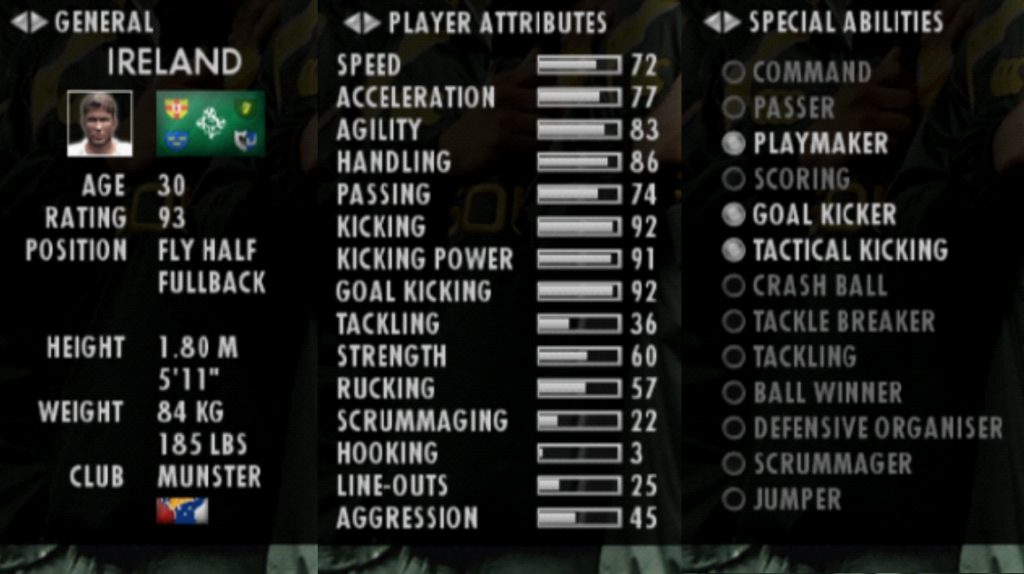 ROG got his own back on Humphreys, but he had to wait two years for it. EA Sports had now correctly acknowledged O'Gara's importance to the Ireland side of that time and had his kicking game on point both at goal and out of hand.

Whether using Munster or Ireland, ROG was at the centre of everything and was great fun to try countless drop-goals with. 36 tackling? Ouch. 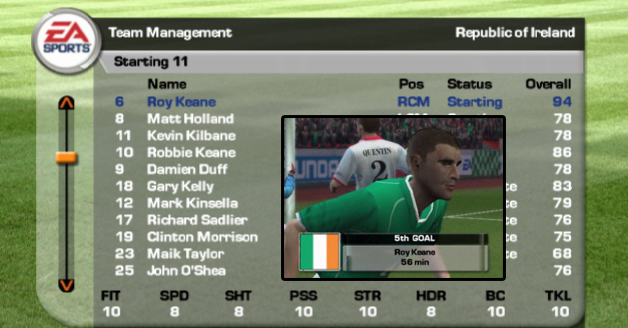 Months after the 2002 World Cup we saw one of the best ever FIFA releases in 2003 which featured revolutionary through balls, a ridiculously fun free-kick system, and a Cork man with a shaved head that won games on his own. With Saipan still lingering in the air, many Irish fans would have omitted Keane from their team when picking the lineup, but some just couldn't resist.

It was more like Roy Of The Rovers than Roy Keane. He would win the ball every time it was near him with 10/10 tackling rating, he'd always find his man with 10/10 passing, he could go all game with 10/10 fitness, and he could even finish too.

Look at those ratings across the board, Keano was a monster who swallowed midfields whole. 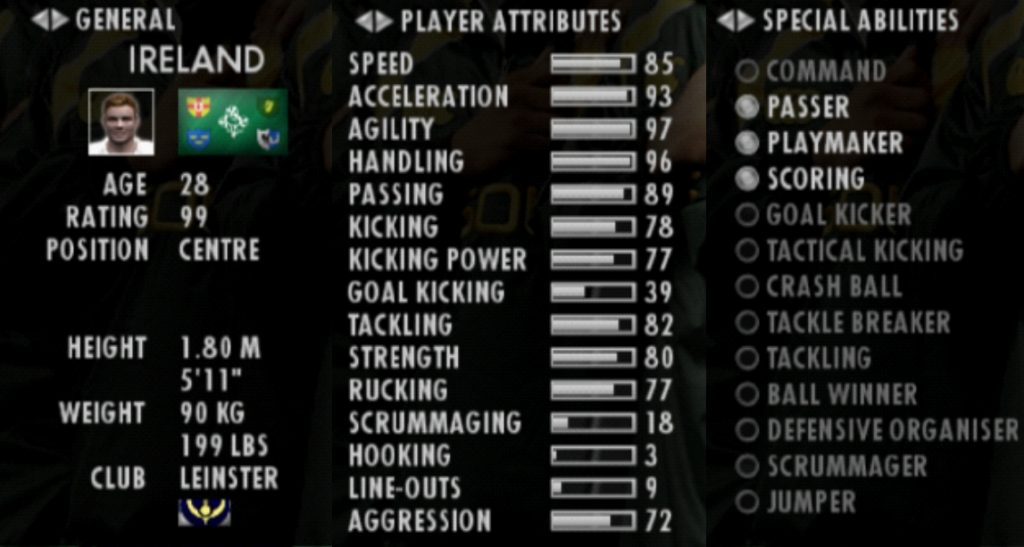 The reason we didn't include more than one version of a single player on this list is that Brian O'Driscoll would have been #1 and #2. Not only was he deemed the most skillful a rugby player could possibly be, but he was given that honour twice, in back to back games.

And it was bloody justified. We've done a write-up on the Rugby 06 version before, but the 08 version was perhaps more widely loved as it was simply a more popular game, and many of us have memories of absolutely carving teams apart with Drico on his own.

Once you saw the star above the head it was time to zig-zag through the first wave of defenders before trucking over the fullback with ease. He was like a cheat code, and he was all ours. By some distance the best video game athlete Ireland has ever produced.

So now you've seen the top 10, who was your favourite to use?

Gaming
12 hours ago
By Gary Connaughton
Fancy A Challenge? Here Are 6 Of The Best FIFA 21 Career Mode Teams
3

Gaming
1 week ago
By Balls Team
10 Of The Most Beloved Football Manager Wonderkids- Where Are They Now?
1

Gaming
12 hours ago
By Gary Connaughton
Fancy A Challenge? Here Are 6 Of The Best FIFA 21 Career Mode Teams
Gaming
1 week ago
By Balls Team
10 Of The Most Beloved Football Manager Wonderkids- Where Are They Now?
Gaming
2 weeks ago
By Gary Connaughton
How To Defend In FIFA 21 - Defensive Tips & Tricks
Popular on Balls
Rugby
15 hours ago
By Maurice Brosnan
The Fascinating Reason Aussie Legend David Pocock Spray Paints His Boots
5