Bryson DeChambeau Has Altercation With Fan After Brooks Koepka Comment

Bryson DeChambeau vs Brooks Koepka is a bit of a strange sporting rivalry.

Usually, two individuals or teams are considered great rivals due to the fact they continually battle it out on the biggest stage. We're thinking Tiger Woods vs Phil Mickelson, Real Madrid vs Barcelona, Roger Federer vs Rafael Nadal.

While those two two are amongst the best golfers in the world, they rarely actually duke it out directly. Instead, their rivalry is driven by a genuine disdain for the other man. It is only amplified by the fans, who have latched onto this golfing rivalry in a sport that is otherwise largely sanitised.

There have been a number of flashpoints over the last year or so. Brook Koepka's legendary interview and DeChambeau getting spectators thrown out of an event for shouting 'Brooksie' at him after just two examples.

We had another one last night, with DeChambeau enraged by the behaviour of a fan after he failed to win the BMW Championship.

He would lose in a play-off to Patrick Cantlay, while also almost getting into an altercation with a fan after the round when they taunted him about Brooks Koepka.

ESPN's Kevin Van Valkenburg described the incident that happened after DeChambeau was making his way off the course after his play-off loss.

Halfway up the hill, something happened that made me feel like we’ve arrived at a miserable place in the never-ending circus that is DeChambeau.

A patron waited until DeChambeau had walked by, but was not out of earshot, then sneered from over the rope line “Great job Brooksie!” DeChambeau spun around in a rage and began briefly walking in his direction.

“You know what? Get the f— out!” DeChambeau yelled. He had rage in his eyes.

I’m being dead serious when I say it could have gotten ugly really fast. Maybe not “Malice At The Palace” bad, but in that moment, nothing would’ve surprised me.

A rope line is little more than a polite suggestion when it comes to security a golf tournament. DeChambeau had been hearing, and ignoring, that kind of taunt all week. But everyone has their breaking point.

Thankfully, DeChambeau paused, angrily motioning for a police officer to handle the heckler, then continued his march up the hill. The entire exchange took less than 10 seconds. The PGA Tour declined comment when asked about the incident by ESPN.

While this incident occurred just after DeChambeau had given his hat to a gleeful young fan, he had been in a tetchy mood earlier in the round.

That included when he asked Cantlay to 'stop walking' while he was taking his shots.

With the Ryder Cup only a matter of weeks away, it will be interesting to see the dynamic around the American team with both Koepka and DeChambeau present. 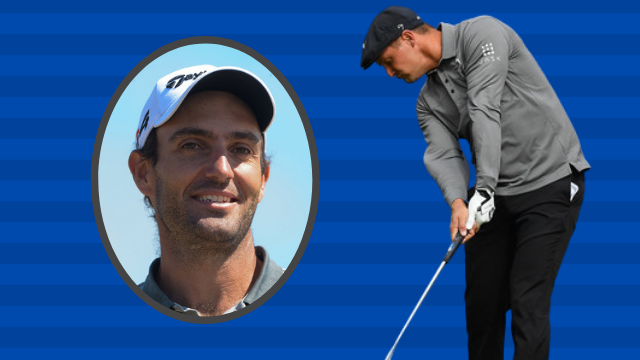