Bryson DeChambeau is never too far away from controversy.

Be it his apparent disregard for golf etiquette, his feud with Brooks Koepka, or getting fans ejected from tournaments, the 27-year old often finds himself hitting headlines for the wrong reasons.

It has happened once against at The Open.

DeChambeau shot a +1 round in yesterday's opening round, with his driver giving him particular trouble. He hit only 28.5% of available fairways which was around half the average mark of the rest of the field.

He surely couldn't blame anybody else for that? Wrong.

Speaking after the round, the American blamed his patchy round on his driver, which he said 'sucks' as it didn't allow him to consistently find fairways.

No holding back from @b_dechambeau on his golf today at #TheOpen pic.twitter.com/T39wWG17wb

Unsurprisingly, the comments did not go down well with his club manufacturer Cobra.

DeChambeau has very specific demands for his clubs, with this particular driver customised to have a 46-inch shaft and only five degrees of loft in order to meet his requirements.

Cobra tour operations manager Ben Schomin told Golfweek that he was very unhappy with the comments, especially when you consider how the company is 'bending over backwards' to appease the US Open winner. He even compared them to that of a small child throwing a tantrum.

It’s just really, really painful when he says something that stupid. He has never really been happy, ever.

It’s like an eight-year-old that gets mad at you. They might fly off the handle and say, ‘I hate you’, but then you go, ‘Whoa, no you don’t.’

We know as adults that they really don’t mean that and I know that if I got him cornered right now and said, ‘What the hell did you say that for?’ he would say that he was mad.

He didn’t really mean to say it that harshly. He knows how much everyone bends over backwards for him, but it’s still not cool.

DeChambeau would go on to apologise for the comments last night.

He said that was indeed him that 'sucked' and not the equipment he was using.

The comment I made in my post-round interview today was very unprofessional.

My frustration and emotions over the way I drove the ball today boiled over.

I sucked today, not my equipment. Cobra and I have worked together for over five years and they are some of the hardest working people in the golf industry and make an incredible product.

Their team is like family to me, especially Ben Schomin who has been there for me every step of the way since I started my career.

I deeply regret the words I used earlier. I am relentless in pursuit of improvement, and perfection.

We're sure he will accept all blame for his failings on the course moving forward. 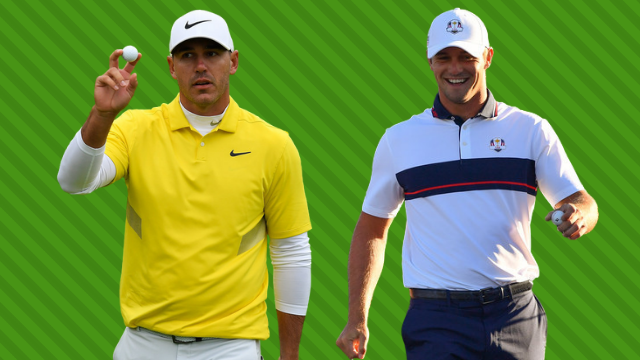