Bryson DeChambeau's refusal to shout 'fore' when his tee-shots veered towards the crowd at Torrey Pines came in for criticism during the weekend's US Open tournament.

The American often aims his tee-shots towards the rough - and so the crowd - as it can provide him with a better angle to hit the green.

"His philosophy is that he's going to hit it as far as he can, go find it and go play," former European Tour player Gary Murphy said on RTÉ’s Sunday Sport.

"There's a lot of statisticians out there at the moment saying that's the future of the game.

"The big problem I have with him more than anything is he’s not shouting ‘fore’, which is disgusting.

"He’s playing a strategy that he’ll hit it in the rough on certain holes, which is fine, but he winged three or four drives into the rough with galleries there.

"I don’t know why the commentators aren’t picking up on it enough. I just think it’s disgraceful.

"Hopefully someone doesn’t get hit. The speed that he hits the ball, as hard as that ball is coming in it could do serious damage.

"You have a responsibility as a player to protect the viewing public, and he’s not doing that."

Bryson DeChambeau out here intentionally hitting into the gallery on the 4th hole and not caring to yell "fore" like everyone else would pic.twitter.com/SdkqxTfxzj

Bison DeChapeau once again launching it at the crowd and refraining from shouting a warning. Not calling “fore” or indicating direction of a wayward shot to give fans a chance to protect themselves is just ignorance. There is no excuse.

Bryson aiming towards the gallery to the right of 4, blasting driver and reaching for the tee without even considering yelling fore while it lands DIRECTLY in said gallery.... the toughest of scenes.

Murphy said the simple act of providing that warning allows spectators to cover their heads and brace for any impact.

"It happened to a friend of mine in Mount Juliet during the Irish Open years ago," said Murphy.

"He hit tee-shot on 14 into the crowd. He shouted 'fore' but it landed on a guy's eye. He was tied 19th in the final round and dropped about 12 shots in the last five holes because he was in such distress. The man recovered.

"It's so wrong. It sends out such a bad message to people who don't play the game. The reason it's a 'fore' [that you shout] is because that sounds pierces through the air.

"I think he's a fantastic golfer, he's great for the game, he's changing a lot of things but it's just wrong what he's doing and he should be called out on it." 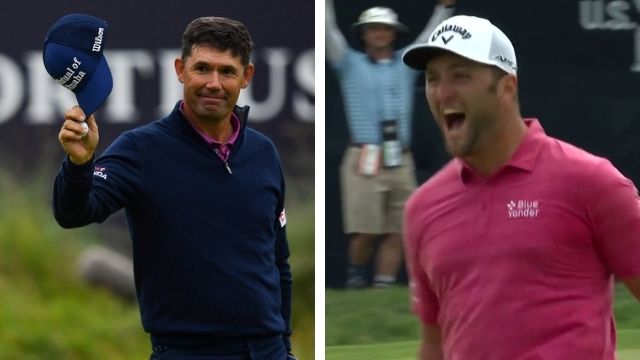