Only a couple days after Europe's humbling in the Ryder Cup at Whistling Straits, attention will already be turning on how to ensure a much more positive outcome when the event hits Rome in 2023.

The Americans completely outclassed the visiting team on the course, with their greater individual firepower certainly making a huge difference. Some of the decisions made by European captain Padraig Harrington have been questioned, but it is unlikely he could have done much to reverse the result on this occasion.

Focus will now shift onto who will lead the Europeans in 2023. Lee Westwood is the name that has been most frequently mentioned, although he could still be in playing contention having played in the event for the 11th time last week.

Speaking after Sunday's singles, Westwood said that he still had playing ambitions for 2023, but that he would certainly consider the role. Having questioned the qualification format for this year's event, the Englishman also admitted that he had already thought about how he would change up the process were he to named captain.

I assume I’ll get three or four months to think about it but people keep coming up and saying 'are you going to be the captain in Rome?’.

I’d prefer to play but Father Time’s not kind is he? Trust me, it’s better playing than it is watching...

Obviously being Ryder Cup captain is a massive honour and it is something I’d want to do, why wouldn’t you? I’m sure Padraig’s enjoyed it even though it’s not gone right for him this week.

It’s got to be some time in my future but I don’t want to let go yet...

My first thought would be four (qualifiers) off the European points list, four off the world list and four picks.

There’s got to be some sort of qualifying because you want your players to play under pressure. That was the nice thing about Bernd (Wiesberger) doing everything late on in Switzerland and Wentworth.

You knew he would drop into the Ryder Cup and he came out and birdied the first two holes. If you can play under pressure and qualify for the team you can come out here and represent the team when you get under the heat.

I just feel like Wentworth is a massive tournament which should stand on its own, it shouldn’t need the distraction of it being the last qualifying event.

Having an extra captain's pick would be one way to help the next captain shape the team, with America's Steve Stricker opting to have six in the 2021 edition.

Paul McGinley has also suggested a number of ways for Europe to close the gap over the next couple of years and it certainly seems that something will need to change in order to stop the USA from dominating the Ryder Cup for the foreseeable future. 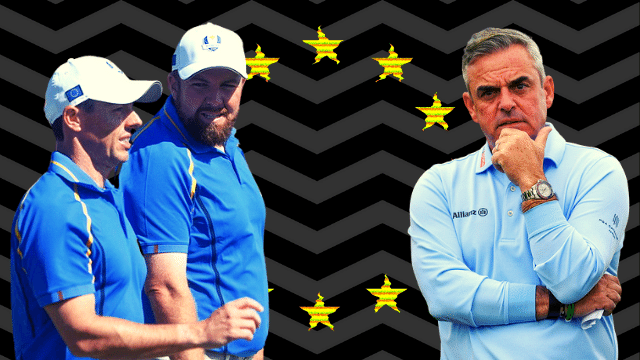 Golf
4 months ago
By Gary Connaughton
Lee Westwood Ryder Cup Not Happy With Ryder Cup Qualification Process
Golf
5 years ago
By Gavan Casey
Bad News For The Irish As Darren Clarke Announces His Three Ryder Cup Wildcard Picks
Golf
6 years ago
By Conor Neville
VIDEO: Jordan Spieth's Comments On The 'Dumb' 18th Hole Were Caught On TV...
Popular on Balls
GAA
2 days ago
By PJ Browne
Insane Drama As Late TJ Reid Goal Sends Ballyhale Into All-Ireland Final
Rugby
1 day ago
By Colman Stanley
Yesterday Was Not The First Time Wayne Barnes Sent A Player Off For Getting Lippy
Rugby
23 hours ago
By Colman Stanley
Champions Cup Predictions And Permutations For The Irish Provinces
The Rewind
2 days ago
By Jonathan Byrne
The Definitive Ranking: Deli Items Ranked From Best To Worst