What a week it has been for Cavan's own Leona Maguire.

On Wednesday evening, the golfer touched down on home soil for the first time since her heroics in Ohio.

The locals were out in their droves to get a glimpse of the Solheim Cup winner in Ballyconnell and at the Slieve Russell Hotel.

Over the extended weekend, Maguire not only celebrated being a member of Team Europe in their defense of the Solheim Cup.

Her individual efforts grabbed the headlines at home and across the world, as many believed she was the consensus MVP of the tournament.

Beating Jennifer Kupcho on Monday by 5 & 4 in the singles matches capped off a remarkable few days for the Irish golfer.

Here were some of the highlights of her homecoming in Cavan:

She did the nation proud.

Huge congratulations to @Leona_Maguire, who was too hot to handle for the best the USA had to offer during The Solheim Cup 🔥 🔥 Her local fire crew, CN17 Ballyconnell, were honoured to lead her home to a warm welcome this evening https://t.co/DVgom5l076 pic.twitter.com/NIF1IBXXyc

"I think it's been an incredible year for Irish sport."

Solheim Cup star Leona Maguire has made a triumphant return home to Cavan this evening. Family, friends and supporters have gathered at the Slieve Russell to help the 26-year-old from Ballyconnell celebrate her success pic.twitter.com/OhQ1STqIdw

Raising a glass to the @SolheimCupEuro winner @leona_maguire Huge turnout in Ballyconnell this evening 🥳🏆😂 pic.twitter.com/VHPjfguK5l

In the aftermath of the Solheim Cup, Maguire broke the all-time rookie points record in the event, coming out with 4.5 for Team Europe.

It follows on from a brilliant summer that has seen a number of Top 10 finishes including a tie for sixth in the Evian Championship in July.

At that event, Maguire made history by earning the tied lowest ever final round score of 61, out of any golfer male or female.

On Monday, the 26-year-old spoke to Sky Sport's after Team Europe's win. "It was a dream come true to be here. To go and win a Solheim Cup on American soil... You can't even imagine..."

"We've had a phenomenal team this week, from top to bottom. This is an experience I'll never forget."

"Never in my wildest dreams did I think the week was going to go this way. It's been an honour to represent Europe. The trust that all the captains had in my was incredible."

Having delivered several days of fantastic golf, Maguire's 43rd in the world LPGA ranking is only going to go up from here. 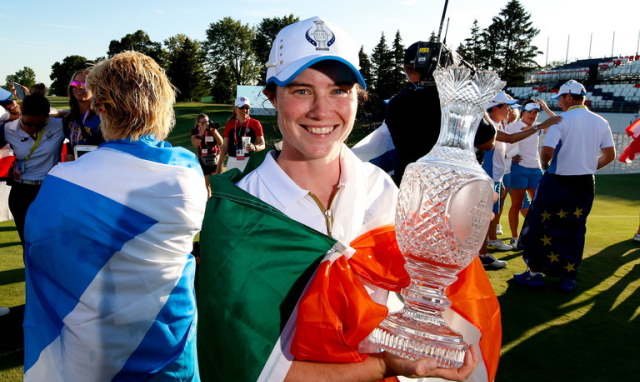