Leona Maguire Impressing All In The Solheim Cup

Leona Maguire is making waves in the US after a superb start to her debut Solheim Cup.

The Cavan golfer is flying for Team Europe, helping them to a 9-7 lead heading into Monday's singles matches. Maguire has played in four matches so far, partnering with Mel Reid in three and Georgia Hall in one, picking up three-and-a-half points.

"I was impressed with her even before she made the team, and I had watched little bit over this year and had followed her career over the last probably five or six years.

"She has the reputation of being a great match player, and I think she's shown everyone that that's true."

While the 26-year-old's exploits come as no surprise to those in Ireland, it has in the US.

On the No Laying Up Podcast, the following was said about Maguire and her heroics:

"People in Ireland, you gotta alert us when somebody... No-one mentioned Leona to us.

"We had no idea she was coming. We need a little heads-up on this.

"They are fired up in Ireland about this.

"I don't think I ever fully realised before this, that this is maybe the greatest Irish women's player ever."

Leona Maguire just STUFFED IT. To this pin! https://t.co/eGmfwTCmdd

It is not just the US media that is taking to Maguire and her efforts in the Solheim Cup.

"By the end of the week, I just said I wanted her to like me a little bit," said Reid with a laugh on Sunday.

"She's a fantastic player and my role was to make her feel a bit more comfortable as someone who has been in a few Solheim Cups.

"I've been very impressed with her, and her determination is second to none.

"It has been an honour playing with her the last couple of days."

Mel Reid are you serious?! 🤯

Maguire has continued to stay grounded despite the praise.

"I think it was a pairing that neither of us saw coming but the captains saw something that we didn't see in ourselves," said Maguire about her partnership with Reid.

"I think that we are both fearless on the golf course which is something that you need to be in these matches especially given the pairings that we were up against." 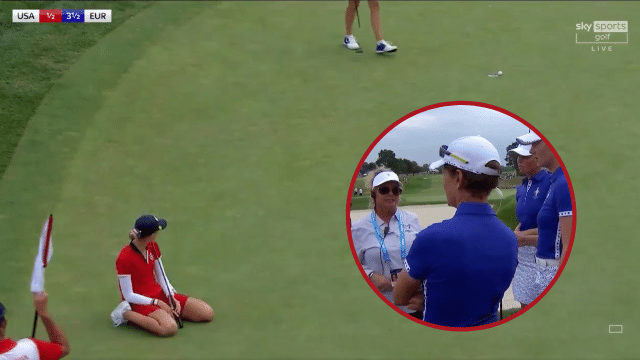