Day 3 of the Solheim Cup brought 12 singles matches to the fore.

It was a day where Europe needed just a tie overall in the individual matchups to win the prestigious event.

However, a victory for Team Europe wouldn't just steal the headlines. It was the standout performance over the three days from Leona Maguire.

As previewed by Golf.com, "If any match can equal the high expectations of the Nordqvist/Thompson opener, it’s this meeting of Solheim Cup rookies."

Kupcho was 3-0 going into the singles matchups. It was a pairing of two in-form rookie golfers. They predicted a halve. Maguire would have the last say.

Leona had a dream start to the singles matchup, as she landed herself within putting territory for an eagle on Hole 2.

Dialed in.@leona_maguire reaches the green in two at the #SolheimCup

The fairytale continues. Maguire converts for the eagle on the second. She goes 1 up to set the tone for the match.

Every putt is money in the bank with Leona Maguire at the minute 💰pic.twitter.com/HE1t898lKd

The disbelief in the commentators voice in this clip, as Maguire goes 4 up after seven. Her third birdie in four holes.

A tee off from the 12th. The commentary team a bit like, "another one?".

And that's a wrap. Kupcho putts short to call it a day. A cool, calm and collected performance from Maguire when the pressure was high.

.@leona_maguire secures the win & puts the first point of the day on the board for #TeamEurope #SolheimCup pic.twitter.com/MA4UaDoHzS

An interview with Sky Sports post match. Leona willing on the Irish fans to come out to Spain in 2023.

The woman of the moment with twin sister Lisa. Talking to Sky Sports Golf in full after finishing up.

The Solheim Cup trophy passed around the players, and Maguire gets chants of 'MVP' from a distance.

The 'Leona' effect? It can't even be measured how much she'll do for golf in this country with performances like that. 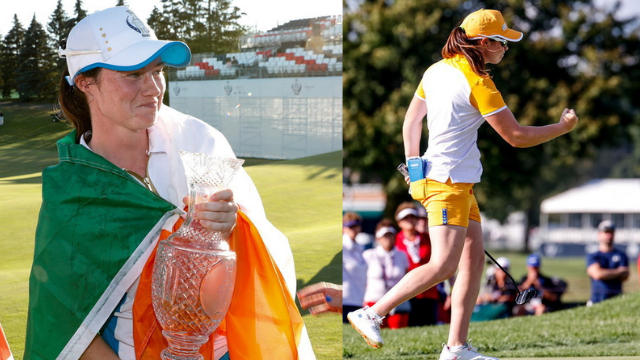