When you get two Irish men together for a competition on any side of the globe, you're almost always guaranteed plenty of slagging.

We were treated to a near ten-minute 'Chipping Challenge' this weekend over on the DP World Tour Twitter account and two very familiar names took part.

It was an all Irish affair as Shane Lowry took on Padraig Harrington to challenge each other's short game. Lowry and Harrington have enjoyed a positive weekend of golf at the HSBC Championship.

Harrington was keen to raise the stakes from the get-go. "Maybe if I win, you have to shave your beard. And if you win, I've to keep my beard!" he proposed.

Early on in the challenge, it was clear the more experienced golfer was trying to unsettle his younger competitor. "You don't want to mess up now," Harrington blurted.

The two kept their head down for the most part early into the chipping. That was until there was a contested shot that Lowry wasn't too happy about.

"I'd say that's you," Lowry said. "I don't know," Harrington replied. "I think you're closer." Then Lowry's caddy Bo Martin decided to give the point to Harrington.

"Bo doesn't even argue for me like. Do you know like I write your cheque Bo? You're only allowed argue for me. At least try and get a half!" Lowry joked.

To settle the first game Lowry claimed it was the 'biggest shot of 2022 so far' and was absolutely reveling in Harrington's 'duff' with a celebration to match.

It's clear the two have a great relationship on the course whether it's been through the tournaments they've both played in or their Ryder Cup exploits.

Nonetheless, the 'Chipping Challenge' is well worth a watch. 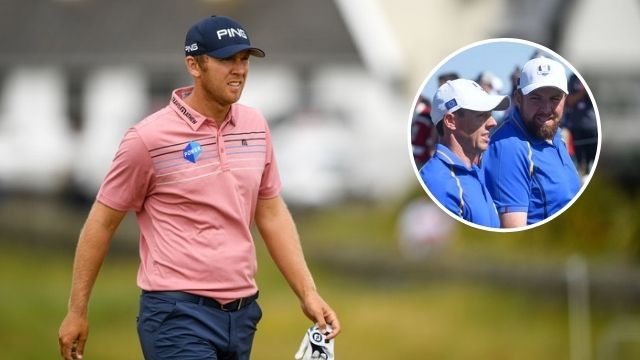