Hours removed from this year's Ryder Cup and the excitement is at a two-year high.

The thoughts of the Europeans, enjoying life as 'The Underdogs' yet again, toppling the United States is one thing. But seeing Rory McIlory and Shane Lowry out on the course is another.

To top it all off, Padraig will be keeping a watchful eye over it all. It's going to make for a fantastic few days of viewing.

Speaking ahead of this year's Ryder Cup this week, both Rory McIlory and Shane Lowry are relishing the chance to tee off at Whistling Straits.

"I think the atmosphere brings the best out of us," McIlory told Sky Sports. "It's probably the most intense atmosphere that we play in every two years."

"For me, it was something that I really wanted to do and I felt like I had to do if I want to be up there with those guys," he said.

A lot has been remarked this week, and in the build-up, about the Europeans chemistry and team bond being a decisive factor of Ryder Cups of old.

"The Americans obviously, they're playing for their country," McIlroy said. "We play for each other." It'll be his sixth Ryder Cup to date.

For Lowry, the narrative is a little different. He knows he's come close to making the team in the past, but he won't settle on just being part of the team this week.

"I felt like I let it slip in 2016," the Offaly man said. "I should have made that team. I didn't play great towards the end of that campaign."

"Now that I'm here, there's only one goal for the rest of the week and that's to win. That would obviously be the icing on the cake."

How do the Europeans do it? McIlroy jokes, "14 and a half" before giving his final take on this weekend's battle in Wisconsin.

"We play our games, we be ourselves, we play for eachother. We focus on our little European cocoon, don't let anything else get to us and get in our way."

See Also: Padraig Harrington Has Promised To Get A Tattoo If Europe Win The Ryder Cup 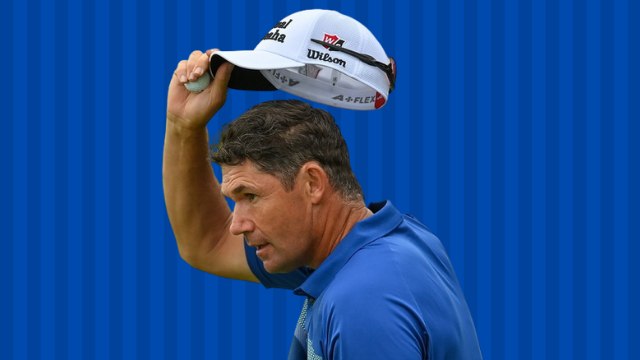 Golf
3 days ago
By PJ Browne
Shane Lowry And Rory McIlroy Delighted For Seamus Power
Golf
1 week ago
By Eoin Harrington
Shane Lowry Defends Decision To Play In Saudi Arabia
Golf
1 month ago
By Jonathan Byrne
Rory McIlroy Tells Great Story Of Tiger Woods' Minimal Trophy Cabinet
Popular on Balls
The Rewind
1 day ago
By Gary Connaughton
Quiz: From Which Irish County Did This Company/Product Originate?
GAA
6 hours ago
By PJ Browne
Insane Drama As Late TJ Reid Goal Sends Ballyhale Into All-Ireland Final
The Rewind
2 days ago
By Jonathan Byrne
The Story Of Meat Loaf's Tour In Ireland During The Troubles Is Remarkable
Football
5 hours ago
By Jonathan Byrne
Roy Keane Enjoyed Dig At Harry Kane For Referee Bias Being 'England Captain'