A month shy of his 51st birthday, Phil Mickelson became the oldest winner of a major championship when he took home the PGA Championship at Kiawah Island on Sunday. In fourth position was another former PGA Champion, and a man just a couple of months shy of his own 50th birthday, Padraig Harrington.

It's what we all want to see at these major championships - the old guard rolling back the years and facing off against the young bucks who tear up the PGA Tour week-in, week-out.

Afterwards, Harrington spoke at length about the his performance and the brilliant conditions of Kiawah. A notoriously tough course, as close to links golf as a parkland course can be, the Ocean Course at Kiawah Island doesn't see much action in professional golf. It hosted the PGA again nine years ago when Rory McIlroy won his second major, the World Cup of Golf (which Harrington won for Ireland with Paul McGinley) in 2003 and 1997, and the 1991 Ryder Cup.

The fact that such a fantastic course doesn't exist on the regular schedule emphasises that standard, birdie heavy golf is what the PGA Tour is all about. When majors come around that are seen as too difficult, the players will often gripe and moan for the week, complaining about "fairness."

Harrington, like Mickelson, excelled this week in tough conditions. Week-in, week-out, both struggle to live with the firepower of the modern player. But when guile and touch are to the fore as they were this week, the legends of the game can still compete. Harrington said as much after the event.

I can't tell you how good a setup this was this week. I have to say, it was probably the best Major setup I've ever seen. It may have been equaled in the past, but it couldn't have been bettered. I know the golf course is fantastic, but they really set the course up that there was opportunities to make bogies, and opportunities to make birdies. It really was that case.

I'd love to play this style of golf every week. I would be a bit more competitive that playing a regular... a regular tour event, it's hard. It's a lot easier at these majors.

It's an interesting thought. Played in tougher, windier conditions, the likes of a Harrington flourished. When all is equal and soft green courses produce tepid challenges, power becomes the key to victory.

Padraig Harrington gave us more insight in that 3 minute interview than I’ve heard in all the coverage since Thursday. Some man.

It's a unique issue for golf, and one that should be seen as an opportunity for the game. The tougher the conditions are, the more the wily veterans can compete. The easier they are, the more it becomes about the athlete.

With that said, there are plenty of the young bucks on tour that are good enough to take the mantle, no matter what the conditions. The younger players who are good enough still have an advantage no matter what. Of the last five of each of the four Majors played, only three winners have been 40 or over. But there's no doubt that. In those 20 tournaments, there were 13 "Top 5" finishes for players over 40, with an average winning age of 32.2. In the last 20 regular tournaments played on the PGA Tour, the average winning age drops to 30.4, and there were only eight "Top 5" finishes from the over 40s. Also, it's important to point out that not all major courses are set up as difficult as Kiawah Island was last week.

So, when the playing field is levelled just slightly, the sport gives us stories like Mickelson's win and Harrington's comeback. It's what we want to see. And unlike other sports where any attempt to level the playing field is a dangerous pandering to big names who are past it, the unique opportunity for golf is that this is done by actually making things MORE difficult. If the power hitting kids can't handle having to make a few shots, then so be it!

Let's hope the days of Kiawah Island-like Major Championships aren't such a rarity in future.

SEE ALSO: What Padraig Harrington's Rolling Back Of The Years Means For The Ryder Cup Captain 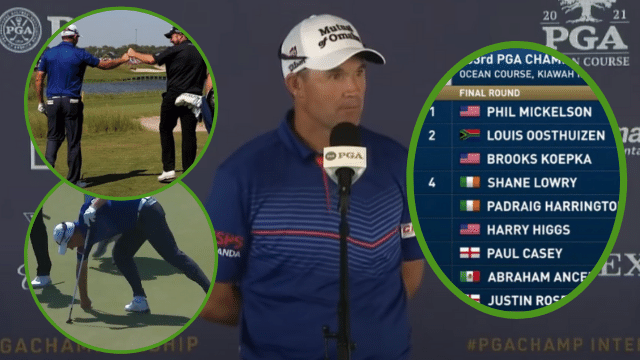