As the world was rightfully concerning itself with the incredible redemption story of golfing legend Phil Mickelson last night, people in this part of the world were more concerned with the sneaking rise of two Irish flags up and up the leaderboard at the final round of the PGA Championship at Kiawah Island. 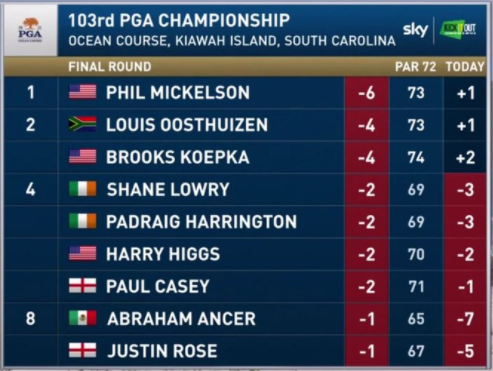 Mickelson, who turned 50 last June, became the oldest ever major champion when he led from start to finish this week. It's the sixth major title of his career, and his first since winning The Open in 2013. The American had fallen off the radar somewhat in recent times. A tied 20th at the Cologuard Classic in February was his best finish of the season. He last won in a very low key Charity Classic last October, and had a second place at a WGC even last August. Other than that, it's been missed cuts and early Sunday finishes, and had dropped to 115th in the world rankings.

In Ireland though, his glory was taken away somewhat by a happy pair of friends playing a casual Sunday round an hour or so up the course. While Shane Lowry's tied 4th is his best ever finish at the PGA, it was the culmination of a couple of months of low key good form for The Open champion that just wasn't coming together on the scoreboard. For Padraig Harrington though, just over a year younger than Mickelson, it was sheer delight and giddy excitement for the Irish sports fan as he kept pace with Lowry and carved through the field like a knife. At one stage the pair had risen to a tie for 3rd place, but Brooks Koepka managed two late birdies to sneak ahead.

Harrington's chip in for birdie on the Par 3 14th was the highlight of an incredible round of 69 at one of the toughest courses in the game.

Padraig Harrington birdies the 14th to get within three of the #PGAChamp lead! pic.twitter.com/ewiQWzfFZ8

50 in August, and with the lucrative seniors tour on the horizon, Harrington's focus has been almost solely on the delayed Ryder Cup for the last couple of years. The three-time Major champion will captain the European team in Whistling Straits, Wisconson in September. Since his appointment as captain in January 2019, Harrington has admitted to spending as much time watching others in tournaments as concentrating on his own game.

Even though some got a little interested in his 400/1 price tag at the start of the week, it did seem as though his relevance on Major Sundays would be consigned to nostalgia and commentary in the future. However, Harrington's form since returning to America after late last year after being at home for the early stages of Covid has been sneakily decent. Before this week, Harrington had made the cut in 11 of his last 15 tournaments, which suggests a golfer not too far away in terms of form.

This week, it all came together beautifully, especially on Sunday, and the result of a fourth place finish, his highest in a Major since the 2012 US Open, is huge for Harrington's next 12 months. He qualified this week as a former champion, having won in 2008, and while he also qualifies for The Open based on the same criteria, the Dubliner hasn't qualified for The Masters since 2015, and hasn't played a US Open since 2013. Now, thanks to his week in Kiawah, he will tee up at Torrey Pines on June 17th, and a next April, as a 50-year-old, he was be back at Augusta for the 16th time in his career. The nearly half a million dollars in prize money won't hurt either.

After the round, Harrington pointed to playing with his good friend Lowry as the inspiration for his brilliant finish. The two seemed to bounce off each other throughout the day and enjoy what was a unique experience.

"I will say, that was probably my most enjoyable round of golf I've had on the golf course in a long time. It's amazing when you play with a friend, it definitely helped both of us relax and just play golf and both of us played really well. We both could have been quite a few shots better."

Lowry also said similar speaking afterwards, calling it one of the best days he's ever had on the golf course. The picture he shared on his Instagram page after the round has already become iconic.

Two Irish sporting legends ripping it up on the world stage once more. 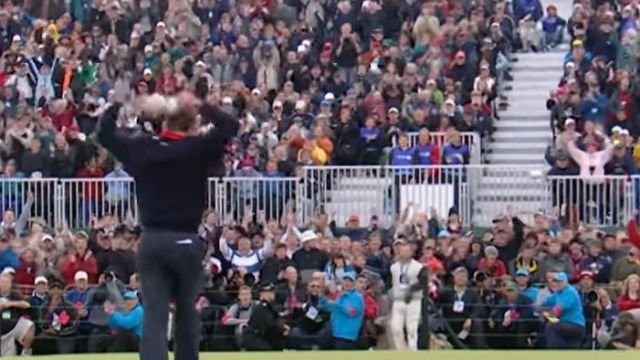 Golf
1 day ago
By Eoin Harrington
Padraig Harrington Has Promised To Get A Tattoo If Europe Win The Ryder Cup
Golf
5 days ago
By Balls Team
Sergio Garcia On Ryder Cup Gamble And Selection Anxiety
Golf
6 days ago
By Jonathan Byrne
Harrington: Koepka And DeChambeau Rivalry Could Bring Team USA Together
Previous Next

Golf
1 day ago
By Eoin Harrington
Padraig Harrington Has Promised To Get A Tattoo If Europe Win The Ryder Cup
Golf
5 days ago
By Balls Team
Sergio Garcia On Ryder Cup Gamble And Selection Anxiety
Golf
6 days ago
By Jonathan Byrne
Harrington: Koepka And DeChambeau Rivalry Could Bring Team USA Together
Popular on Balls
Gaming
8 hours ago
By Andrew Dempsey
Here Is Ireland's Best Starting XI According To FIFA 22's Player Ratings