A brilliant birdie, birdie finish from Jon Rahm saw the Spaniard win his first Major title at the US Open on Sunday.

Rahm sank a 25-foot putt on 17 and an 18-footer on 18 as he finished one shot clear of Louis Oosthuizen at Torrey Pines.

It contrasted greatly to the spot the 26-year-old found himself in two weeks ago at the Memorial Tournament when, six shots clear after 54 holes, he was forced to withdraw due to a positive Covid-19 test.

"The first person who called me that wasn't family," said Rahm at his post-victory press conference on Sunday, "it was right away when I was in the isolation trailer, was Padraig Harrington, and he told me a story in which he was leading by five after 54 holes, signed the wrong scorecard, and got disqualified. He said he got a lot more from that instance, he learned a lot more than he would ever learn from the win.

"Nick Faldo texted me the next morning and told me a story of how he was winning a tournament. He was leading by six with six holes to go and got disqualified, as well, and how he learned from that and got a win the week after on I think it was the Million Dollar Shootout in South Africa, I believe. I might be wrong, but it was a big shootout.

"I believed from the biggest setbacks we can get some of the biggest breakthroughs, and that's why I stay so positive. That's why I kept telling Kelley, when she was devastated about what happened and my family and everybody around me, something good is going to come. I don't know what, but something good is going to come, and I felt it today out there on the golf course.

"I had in mind Padraig and Nick when I was out there on the golf course a couple times knowing that they won shortly after, and I knew today was my day."

Rahm dedicated his US Open victory to Spanish journalist José Manuel Cortizas who recently died due to Covid-19.

"This journalist, he basically did basketball in the city I'm from, in Bilbao, for a newspaper," said Rahm

"He followed basketball. And the owner, or the city of the newspaper said, hey, start following this golfer who's doing pretty good things. Without ever hesitating, he jumped on a plane and started following me around the world.

"He had never stepped foot on a golf course, and he had no idea what was going on. I think his first year was my first pro year, and unfortunately, that journalist passed away a couple months ago due to COVID. It was very quick too. He was in good health. From when he got it to the ICU to when he passed, it was extremely quick. He would have loved to be here. He had just started to pick up golf a little bit.

"At the same time, he has, I believe, around a 20-year-old daughter that now has no dad, and it happened extremely quick. It's just sad. He was a great friend, a great family friend.

"This right here is definitely for him because he would have loved more than anybody else to be here covering this."

Watch: The Men's 800m At Kenya's Olympic Trials Was Wild 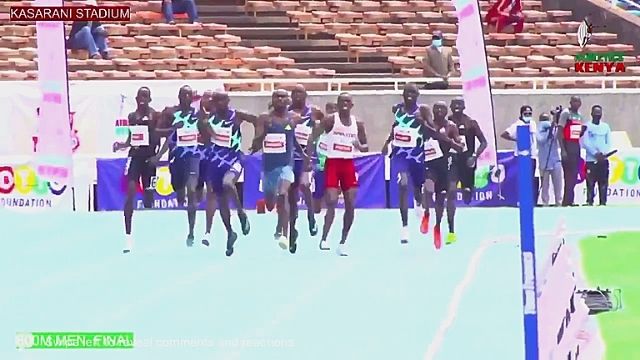