Rory McIlroy got the monkey off his back last night at the Wells Fargo at Quail Hollow, winning his first tournament in 533 days. By his own lofty standards, McIlroy has been pretty average at the sport of golf over the past two years, and in order to revive his game, McIlroy has started to work with coach Pete Cowen and sports psychologist Bob Rotella, who's been instrumental in Padraig Harrington's success as a professional golfer.

One constant of McIlroy's game over the past four years has been caddy Harry Diamond. McIlroy brought Diamond - who's also his best mate and himself an accomplished amateur golfer - in to replace JP Fitzgerald back in 2017 to freshen up his game. As McIlroy's form has swooned in recent months, the criticism for his caddy has gotten louder and louder.

But at Quail Hollow yesterday, Diamond came through for his buddy, big style.

McIlroy - who was last out on the course - brought a two-stroke lead to the Par 4 18th hole. His tee shot landed inside the penalty zone, just beside a creek. The lie was awkward as hell, but McIlroy was all set to play it, before Diamond intervened. After a discussion, McIlroy opted for the drop shot. His iron from the rough landed on the green and he two-putted to victory.

Afterwards, McIlroy was quick to credit Diamond for his help.

“Harry was awesome out there today, especially that decision on the last. I was ready to get in there and try to play that with a lob wedge and he was sort of like, ‘Let’s take a step back, let’s think about this. Where’s the best place you’re hitting your third from?’ So he sort of calmed me down and slowed me down a little bit and said, ‘Pal, let’s just think about this a little bit.'”

"I think this is our sixth win together and it's probably been our best one. Bay Hill back in 2018 was great because I hadn't won in a while, but this is even better just because Harry's been there every step of the way.

"So he calmed me down and slowed me down a little bit, and ultimately we made the right decision and I dropped instead of trying to play that shot out of the hazard. I hit a great third shot onto the green and was able to two-putt from there.

"The tough parts that I've had to endure over the last few months, he's been with me every step of the way and it's nice to come through all that with him and to get into the winner's circle again."

It was McIlroy's 18th win on the PGA Tour, and certainly one of the sweeter ones (he bagged $1,458,000 for the victory). It's a huge win for Diamond as well and gives McIlroy plenty of confidence heading into the PGA at Kiawah Island in two weeks time. 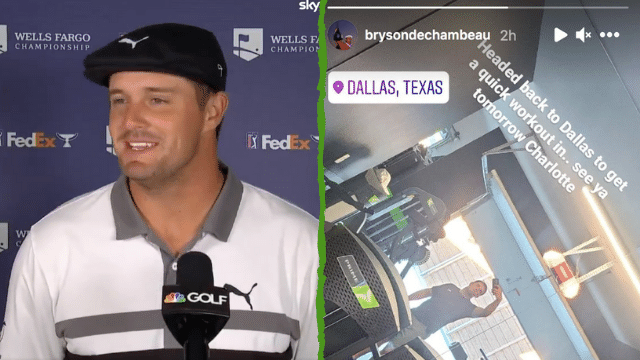