"We've Created This Role In Our Imagination" - Is The Ryder Cup Captain That Important?

The Ryder Cup comes down the tracks this weekend, the most novel and exciting event in the golfing calendar. We'll spend our days obsessing over the moves of a walkie-talkie brandishing semi-retired golfer who won't hit a ball all weekend.

The role of the captain has become central to the marketing and the coverage of the event. Not long after Graeme McDowell had sunk the putt to give Europe victory in the 2010 Ryder Cup in Celtic Manor, the Sky cameras found themselves trained on captain Colin Montgomerie as he strode back to the clubbouse. At that moment, Monty resembled the general of a conquering army. He was the captain who won back the Cup for Europe.

This is the Ryder Cup captain in triumphant pose. But it is also the Ryder Cup captain's lot to cop the flak in defeat. Two years ago, Phil Mickelson crucified Tom Watson without naming him, comparing him unfavourably with America's last victorious captain Paul Azinger. He delivered a stunning soliloquoy explaining why Azinger was a successful captain. He got the players invested the process, he initiated a 'pod' system, etc, etc...

What is it that separates a good captain from a bad captain? And is the importance of the role overstated?

This writer has to come clean at this point and admit he's on record about his scepticism on the position of Ryder Cup captain. Two years back, while still somewhat ignorant of the nature of the facebook beast, he waded into this debate, with an article which was mischievously titled 'Ryder Cup Captain: The Most Bullshit Job In Sport'. The article was deliberately playful and provocative. Some manner of exaggeration was employed. He thought the post might prompt a smile of recognition from many and generate a few nods of agreement online. He wasn't wholly right on this.

It was the first post I had written for Balls.ie that was properly torched in the comments section. To the point where friends in real life were coming up saying, "well, how are things?... Jaysus, they didn't like that article, did they?"

While the abuse was sobering and character-building, it sadly stopped well short of being educational. The majority of the commenters - somewhere in the region of 100%, in fact - confined themselves to declaring the article "shite" and passed up the chance to offer a detailed rebuttal. 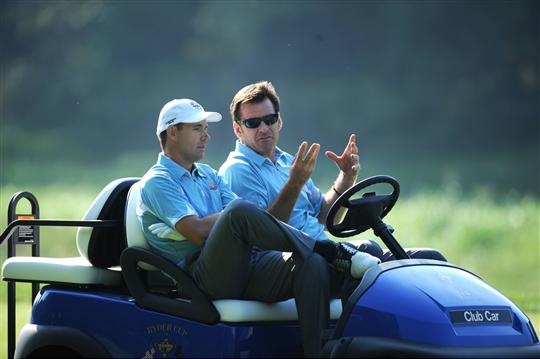 So, this time around - in a quest to understand the importance of the captaincy - we have canvassed the views of two men with different perspectives.

We spoke to Richard Gillis, an award winning writer on business and sport, has written a book called 'The Captain Myth: The Ryder Cup and Sport's Great Leadership Delusion'.

In golfing terms, the headline moves a captain has to make concern the selection of the pairings, deciding what players play on the Friday and Saturday, and then laying out the order the players head out in for the Sunday singles.

Not pairing together players who can't stand each other is typically regarded as a shrewd move.

Hal Sutton, whose name usually crops up in debates to find the worst ever Ryder Cup captain, managed to make a balls of this one when he took the left-field decision to pair Tiger Woods and Phil Mickelson together for the first match in 2004.

But then, this is was an affront to basic common sense. The sporting equivalent of losing a game of X's and O's.

As far as Gillis is concerned, far too much importance is attached to the decisions made by the captain. He's not insignificant but his role has been grossly overstated.

The role essentially is there are three days of golf and its played every two years. The team is selected largely by algorithims and by the world ranking lists. There are wildcards that the captain will choose, three for Europe and four for America. And once the event starts, there is the order of which way they go out, who they'll play with, and the singles order on Sunday.

Now all of those are interesting. It's great theatre to see the captain at play. We're seeing decisions and we're projecting onto him all sorts of strategies and thoughts and ideas. But actually that's a fairly small responsibility compared to, say, a football manager or other coaches who have a 24/7 yearly relationship with the players.

So, this is peculiar job in many ways. It's unpaid though its very valuable to be the captain because its a marketing asset. You are projected onto the 'leadership industry' which welcomes you with open arms, particularly if you win.

Gillis does argue that the importance of the role has been vastly overstated - but this is the responsibility of the media rather than the captains themselves.

We've got to be careful with this because its not the captains who are doing this. It's us. It says far more about us than it does about the captains. We have created this role in our imaginations and in the media. We're the ones who love to talk about it. And we're the ones who'll blame Clarke or Love on Sunday night. So, it's more about us than it is about them. They quite often turn around and say, 'look, it's a simple job, you're making too much out of it'. But we don't want to listen to that...

My conclusion is it's more about us than it is about them. We need the captains to tell the story of the event. And it's very difficult to do that without them so they're a valuable marketing asset. By overplaying and overrating the role of the captain, it actually underplays the role of the team. And it actually takes away responsibility from the team and the players.

1979 was the first year Europe competed in the Ryder Cup. Prior to that it was Britain & Ireland who took on the American behemoth. The US were still much too strong by that stage and won soundly in both '79 and '81. According to Smyth, this was no reflection on Europe's then captain, Englishman John Jacobs, who he maintains was a good captain.

Straight off the bat, Smyth says that the media probably hype up the role of captain too much. But he insists that there's plenty to the role. He is at pains not to diminish his importance.

Smyth is adamant there is much more to the captaincy than the three days of action. The captain has to remain in touch with the players all year, not just the ones who feature in the final 12, but the ones chasing a place.

There's a very big build up, you see. They qualify all year. He has to be in touch close to the time when the selection period comes in. He's in contact with the players that even the guys that don't make the team. Because the team comes down to 12 but there could be 18 guys in the mix.

And you've got to keep communicating with these players along the way, sometimes even suggesting that they play in certain tournaments to strengthen their position.

He's attending a lot of build-up functions, if you know what I mean. And then on top of that, on the week, he's as busy as a bee. When they get to Hazeltine today, it's non-stop action, especially for the captain but also for the team. They've so much to do on the week and he has to keep them fully informed.

While Phil Mickelson's brutal call-out of his captain post-2014 made some squeamish, one could empathise with his frustration (indeed, it was cheering to see he cared that much). He's played in 10 Ryder Cups since 1995 and lost 8 of them.

As our transatlantic cousins might put it, he is one of the 'losingest' Ryder Cup players in history. Only veterans of the old GB & Ireland teams boast worse records.

Team USA appear to finally have grown tired of losing and in the post-2014 inquest, it was briefly floated that they select a non-golfing captain.

This was anathema. But why? After all, most of the skills that the position demands - good communication, speechifying, giving lads confidence - aren't exactly golfing skills.

Could a sports psychologist not do the job as well? Gillis thinks it's an interesting question.

Yeah, it's a good one, that. Because when the Americans put together the taskforce after Gleneagles, that was one of the issues that was bandied around at that time. At that point it wasn't a realistic option... but if they keep losing, it would be interesting to see someone from the outside have a go at the job. Golfers would hate it and culturally it would be a tricky fit, depending on who they got.

But, I agree, it would be interesting to see what would happen if someone else did it. Because, golfers live their lives hitting golf balls and are trained that way. They don't have all the other stuff. And be aware that they quite often talk about the speech. Someone of them do it well and some of them do it terribly but that's not their game. We shouldn't expect them to do all these things and be very good at it.

That's almost a side issue but it's been built up into something huge. I remember Colin Montgomerie referencing his speech and he gave a great speech and his team were 1 up going to the 1st hole... and you're thinking 'well, all-right, not sure about that...

The Ryder Cup is not alone in being suckers for the 'cult of the leader'. Gillis contends that the condition is rampant across of host of sports. But the Ryder Cup is merely the most dramatic illustration of it.

Let's look at Man United-Man City the other week. You barely heard mention about the players, did you? It was all, this is Mourinho v. Guardiola. The Premier League is rife with the cult of leadership. It's just throughout the sports world. It's not by any means unique to the Ryder Cup. But the Ryder Cup was quite a good lens and a microcosm for the issue and quite a good way of telling the story.

Depending on the result this weekend, Darren Clarke will become the symbol of either Europe's failure or success. But this, according to Gillis, is an error of attribution. It feeds the narrative but doesn't reflect the reality. The players are far more important than the captain.

If you took the Ryder Cup captain away, would 12 highly paid, highly skilled experts in their own field come together and make those decisions for themselves? Of course they would. And would there be much difference? No, I don't think there wouldn't be much difference. But it wouldn't be as much fun, we like kicking the captain when he's down and celebrating him after he wins.

Listen to our interview with Richard Gillis below:

Read more: "We Were Going To Extract Some Revenge" - The Chequered History Of The All-Ireland Football Final Replay