Garcia made his name by challenging Tiger Woods (and failing) as a 19 year old at the 1999 PGA Championship. He sprinted up the fairway after a shot was the trees and was famous.  He was an even younger contender to come and take the crown from an already young king.

It didn't work out that way. Through peaks and troughs over the next eighteen years, he never fulfilled that promise. 3o career wins, nine PGA tour victories including a Players' Championship. But when it came to the majors, it was never Sergio's time.

Padraig Harrington, and his own nerve, got in the way in 2007 and 2008. There were plenty of other Sundays throughout the years when it seemed as though there might be a chance only for it to quickly fall away.

Last night, a lot of people said "goodnight" after he bogeyed 10 and 11. It looked like more of the same. It was anything but. He held his nerve on the hardest back nine in the sport, a back nine he has a terrible record on. It was his time.

But his time was a long, long time coming. This weekend was his 74th major championship, second only to Lee Westwood's 76 among the players in the field without a title. The moniker of "best player in the world without a major" is such an annoying golfism, but it's one that Sergio has been saddled with for almost that entire tenure.

He first played the Masters as an amateur, just before turning pro, in 1999. He finished in 38th place, not a bad first trip around. Given what happened later that year at the PGA, you would think that continuing Spain's fine tradition at Augusta. (Jose Maria Olazabal won his second Green jacket in '99 to add to Seve Ballesteros' two victories. )

A look at the leaderboard that year shows just how long the journey has been for Garcia. 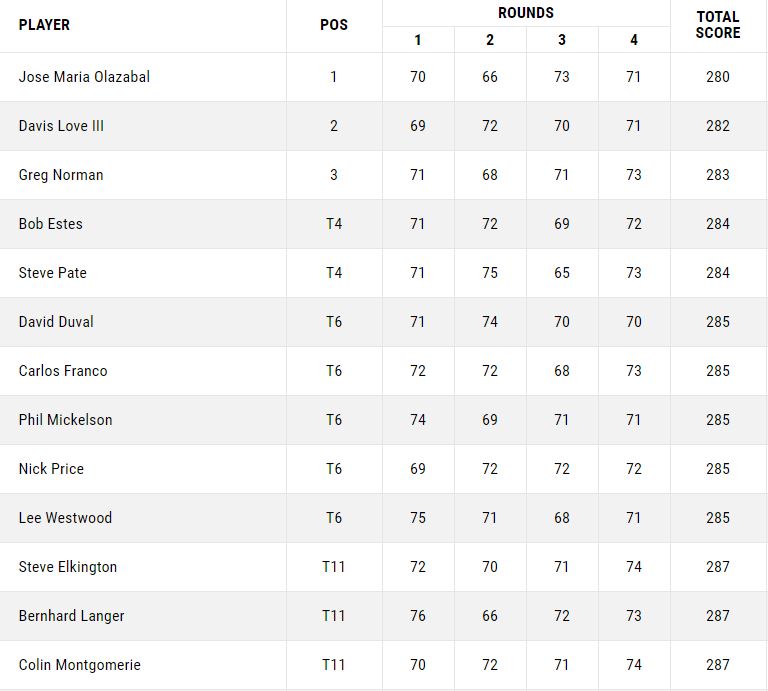 It's a leaderboard from a golf game on the Sega Megadrive. Other than the aforementioned Westwood and Mickelson, Garcia's predecessor as the "best player in the world without a major", it's a long time since any of those players were relevant.

After that first trip, things never quite worked out for Garcia at Augusta. He's had only three top 10s in that time. He was 8th in 2002, tied 4th in 2004, and tied 8th in 2013. Even his 4th place in 2004 is misleading. He finished six shots back from winner Micklelson, and had come from nowhere after a final round 66.

In 2012, Garcia was well placed when paired with Rory McIlroy for the third round. It went horribly, with both players almost out-doing each other in hacking up the course. When they both finally birdied the 12th, they made light of the day and embraced. At the time, some of us seen this as Garcia bringing Rory down to his level. He was used to throwing it all away when things got real. That was his reputation.

After that round, Garcia made an astonishing admission.

I'm not good enough ... I don't have the thing I need to have. In 13 years I've come to the conclusion that I need to play for second or third place. In any major.

I'm not good enough. I had my chances and opportunities and I wasted them. I have no more options. I wasted my options."

Five years later, he has his green jacket and his major. His moniker will have to change. He's no longer "the best player in the world without a major". He's also no longer a bottler.