There is a palpable feel good factor in Irish golf at the minute, not just because Rory McIlroy and Shane Lowry finished second and third in the Masters (with Seamus Power also qualifying for his first major), but also the close relationship between the golfers makes it a bit more special.

The island’s two top golfers, Lowry and McIlroy, are well-known to be close friends, and in a fascinating interview with the Sunday Independent’s Paul Kimmage, Lowry touched on the affection and rivalry between the pair with a humorous anecdote from the Masters.

Lowry laughs as he explains how seeing McIlroy’s name on the leader board spurred him on to recover from a devastating triple bogey on the par three fourth.

On the back of a frustrating 3rd round where Lowry was left behind by eventual winner Scottie Scheffler, the Offalyman could have just given up after posting that 6 on the fourth hole. Instead, he dusted his shoulders off, shot five under for the rest of the round, and eventually finished in a tie for 3rd with Cameron Smith.

It turns out the sudden presence of his old chum at the top of the leaderboard provided ample motivation for Lowry.

“I saw Rory’s name on the leader board and that spurred me on…..I wanted to catch him. I did. I thought 'that little f****r!' It definitely kept me going.

“He sent me a text last night, ‘Great week. Well done.’ I said, ‘Yeah, great round today.’ He said, ‘Great to finish second and third.’ I said, ‘Yeah but I would rather it was me second and you third to be honest.’

Not the final result I wanted today but fought as hard as I could. Congrats to Scottie on a great performance. #themasters pic.twitter.com/cRgsfbRvGD

McIlroy famously shot a 64 that day to finish in second.

Lowry continued this run of form with a third place at the weekend’s RBC Heritage, finishing just a shot off a play-off spot. He is in the midst of his best stretch of golf since 2019, when he won the Open Championship, and you could argue he is playing the best golf of his career, minus the trophies to show for it.

His mentality on the course has been exemplary, displaying a mindset that is not weakened by a bad hole or shot. Lowry gave a brief insight into this mindset when he was asked about his triple bogey on the fourth hole during his final round of the Masters.

He had been prime position to mount a charge on the leader Scottie Scheffler, but the early screw up ruined any chance he had to threaten the American world no.1. However, the mishap barely seemed to faze him, and, as aforementioned, he rallied and secured a fantastic finish.

Kimmage mentions that many would quit after such a devastating hole so early on, to which Lowry responded,

“If you quit in that situation you’re in the wrong game; I made a great par on the next and that was huge, then a good putt for birdie on six and then a great par on seven.”

Lowry is scheduled to play in this week’s Zurich Classic, a team event which will see him partner up with Ian Poulter. 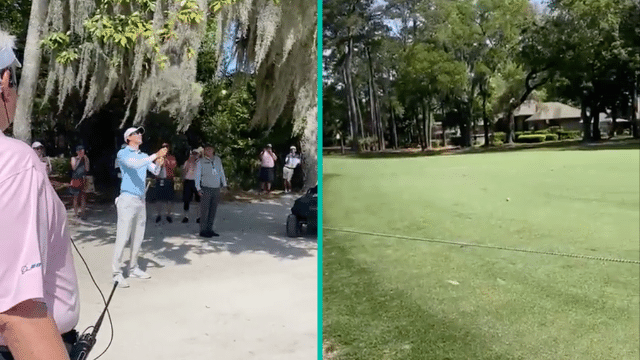 ladbrokes
3 hours ago
By Dylan Ryan
Has Rory McIlroy Overcome His Apparent Mental Block In Majors?
Golf
1 month ago
By Donny Mahoney
Outrageous Bunker Shot On 18th Sends Rory McIlroy Into Raptures
Golf
1 month ago
By Eoin Harrington
McIlroy And Harrington Hoping To Be In The Mix Come Sunday At The Masters
Popular on Balls
Golf
1 day ago
By Gary Connaughton
Padraig Harrington Glad He Didn't Have To 'Make A Decision' On Saudi Golf League
Motorsport
1 day ago
By Gary Connaughton
Carlos Sainz Worried About How 2022 F1 Cars Will Affect Health Of Drivers
46