Shane Lowry was recently confirmed as one of Ireland's two representatives at the Tokyo Olympics, and he says he is travelling with the intention of contending for major honours.

The 2019 Open winner was speaking at a press conference at Mount Juliet ahead of the beginning of this year's Irish Open. When asked about his excitement for Tokyo, he said he had actually known of his place on Team Ireland for several weeks before it was revealed to the public.

I've obviously known for a while that I'm probably going to be on the team and going to Tokyo. Like the team is officially announced on, whatever, after the U.S. Open, and then you start getting text messages from people congratulating you. Got my gear during the week. Talking to some of the people from the Irish Olympic council or committee, whatever, sorry, talking to those people and seeing how much it means to those people to be involved, I think it's just pretty cool that I'm going.

Lowry had been due to represent Ireland at the 2016 games in Rio, but pulled out alongside Rory McIlroy and Graeme McDowell due to concerns about the Zika virus which was running rampant in Brazil at the time.

Now, five years on, he will travel to Japan alongside McIlroy to take on the Kasumigaseki Country Club in Saitama. The two major winners make up a very strong team for Ireland, and Lowry says he has every intention of contending for major honours.

But like I'm not going -- not that I want to put too much pressure on myself. But I'm not going to make up the numbers. Like I'm going to win a medal. I sat down last week and you sort of talk about it and you talk about it with Neil and talk about it with my friends and stuff. We don't actually come home with that many medals from Olympics as Irish athletes. So it just would be really cool to win a medal. It would amazing. It would be a huge achievement, huge achievement for me and my family to be involved in that.

Look, for me growing up, I never thought I was going to be going to the Olympics, so it's obviously new and it's going to be pretty cool.

Golf is a recent addition to the Olympics, only added to the roster of sports for those 2016 games in Brazil. Britain's Justin Rose won the first men's individual medal, and Lowry has every intention of following in his footsteps in Japan.

It's a pretty cool thing, and I think as the years go on, look, golf, it is a big deal now. Like it is a big deal but I think it will actually become bigger and it will become quite a big part of golf is preparing for Olympics. Yeah, like I said, not that -- I'd give anything, if you just really -- it would be unbelievable to go and come home with a medal. It would be a really cool achievement and something that I could tick off my list and be very proud of and happy with.

The Offaly man has been busy this year, becoming an official sponsor of Offaly's GAA teams. He has been enjoying a steady run of form - the highlight being a tied 4th finish at May's PGA Championships with fellow Irishman Padraig Harrington.

Harrington is Europe's captain for this year's Ryder Cup, and Lowry also has his sights set on fighting for a place on the team. He is currently ranked one place outside the automatic selection spots, but has every intention of working his way into contention.

As regards toward The Ryder Cup, I've had some good weeks and put myself pretty close to the team. I think some good golf over the next couple of months will take care of that. And yeah, I'd obviously be very excited to be on that team and going to Whistling Straits and going to win The Ryder Cup.

It would be amazing just to be involved in something like that to go there and try and win that Ryder Cup for especially one of your really good friends as captain. I've not been shy about talking about that.

So it's been my main goal for the whole year and for the last two years, and I really feel like that's there in front of me now and it up for me to kind of go and reel it in or go and grab it by the scruff of the neck and go and get it.

It's an exciting few months ahead for Shane Lowry, with an opportunity to defend his Open crown in just two weeks at Royal St. George's followed by the flight to Tokyo for the Olympic tournament from July 29 to August 1.

Fingers will be crossed all across Ireland that Shane Lowry and his fellow countryman Rory McIlroy can manage to take home silverware from Tokyo. 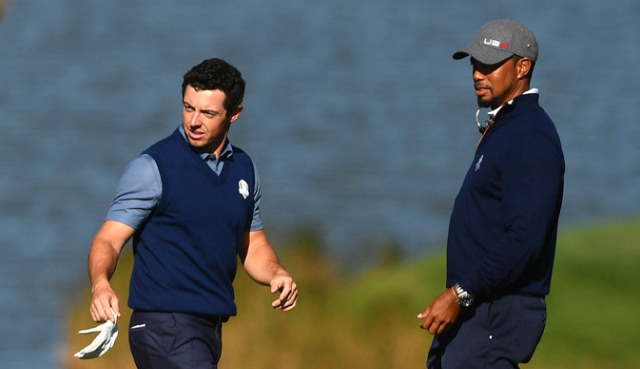 Golf
9 months ago
By John Dodge
Everything You Need To Know Ahead Of The Final Round Of The Olympics Golf
Golf
9 months ago
By Andrew Dempsey
Friendship Helps Drive Shane Lowry And Rory McIlroy To Verge Of Olympic Medal Places
Olympics
9 months ago
By John Dodge
Rory McIlroy and Shane Lowry Put Themselves In The Medals Reckoning Today
Popular on Balls
Football
12 hours ago
By Gary Connaughton
Watch: Neil Lennon Had Furious Reaction To Being Sent Off In Cypriot Cup Final
Football
9 hours ago
By Gary Connaughton
Watch: Remarkable Fan Footage Emerges Of Manchester United's Famous 1999 Nou Camp Comeback
Football
13 hours ago
By Gary Connaughton
Frank Lampard Reveals Seamus Coleman's Huge Role In Turning Everton's Season Around
GAA
2 days ago
By Luke Delaney
Jackie Tyrrell Baffled By Brian Cody Selection Decision In Wexford Defeat