Shane Lowry and Rory McIlroy head into the final day of their Olympics campaign with a real chance of securing a medal, positioning themselves in 5th and 9th respectively.

McIlroyhas the best chance of a medal, just a shot off third placed Carlos Ortiz and Paul Casey. He is three behind leader Xander Schauffele, who leads on 14-under.

The 32-year-old Holywood native has been paired alongside fellow Team Ireland golfer Shane Lowry, and he feels in fine fettle ahead of his final round set to begin on Saturday night.

“It was pretty good,” he told RTE Sport after his latest round. “I got to four under through 13 and thought I could have built on that score but I’m still only two behind with 18 to play.

Tokyo 2020: 'It was pretty good' - @McIlroyRory has put himself in contention for a medal #olympics #tokyo2020 #RTESport

“I’ve got a great opportunity tomorrow to go out there tomorrow to shoot a good round of golf and see what happens.”

“It has been great [at the Olympics]. Shane and I have spent a lot of time together this week and it feels like we’re back in our amateur days.

"We had some great times back in the day and we’ve been reminiscing on some great stories.

"This week has been a throwback to that, so it has been good fun.

It is not only McIlroy who has a tangible chance of securing a medal, Lowry is well in the race too.

He shot a -3 round of 68 to keep himself in contention, just three shots behind Japan’s Hideki Matsuyama.

“I played well on the front nine and didn’t have my best one on the back nine,” he said after his round.

Tokyo 2020: 'My goal was to give myself a chance of winning a medal on Sunday' - @ShaneLowryGolf in the mix#olympics #tokyo2020 #RTESport

“I came here with one thing on my mind and that was to give myself the best chance to win a medal on Sunday and I am only three back now.

It’s something that I’m not trying to think about too much, but I’m sure I will tonight over dinner, when I’m going to bed and when I wake up in the morning.

But when I get back out on the course it will be all guns blazing to go out and try win a medal.

And the chance to win a medal is a prospect and opportunity that is not lost on the Co. Offaly native.

“I would have never thought I would have been at an Olympics or competing at one,” he said.

"To be able to do that would be very special for me, my family, my friends and everyone at home in Clara in Offaly.

"Everyone that knows me knows that I am a proud Irishman. To be represent my country and to get a medal while doing that would live long in the memory for me."

Should either Lowry or McIlroy tie in a medal position at the end of their final round, the final standings will be decided by a sudden death playoff. 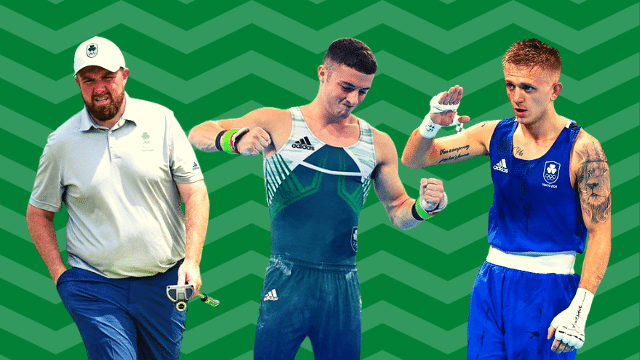