It could be a monumental fortnight for the Offaly man after the birth of his second daughter last week.

Shane Lowry is without doubt a favourite to make the European Ryder Cup Team whatever happens at this week's BMW PGA Championship at Wentworth.

The 2019 Open Champion is currently sitting in the final automatic qualification place which could guarantee his selection for the team.

If Lowry falls out of the qualification spots, he'll likely be in contention for a wildcard selection by Team Captain Padraig Harrington.

Nonetheless, he'll want to ensure his selection is safe with a good performance at Wentworth. That could be out of his hands, however.

Is a Ryder Cup debut on the cards for Shane Lowry? 👀

The Race For Qualification

As it stands, nine places are given to those who automatically qualify. They consist of the top four in the European Tour points list and the next five on the World Points list.

Jon Rahm, Tyrell Hatton, Paul Casey and Viktor Hovland have all confirmed their places on Team Europe via their classification on the two points lists.

Lowry sits fifth in the World Points List, so ninth overall, and he'll be hoping for a good performance at Wentworth to leave him out of reach for other Europeans.

Then you have Rory McIlory, who's fourth in the European Tour List but could fall back on merit of the World Points list. Nonetheless, he's as good as guaranteed to be there.

It'll be Rory McIlory's sixth consecutive Ryder Cup if he makes it. Lowry, on the other hand, could have a trickier route towards selection.

Lowry's spot and the McIlroy effect

Bernd Wiesberger could be the bearer of bad news if he finishes within the Top 50 at Wentworth. If the Austrian does so, he'll knock McIlroy into the World Points list.

Matt Fitzpatrick could also be another one to watch. If he manages a top-24 finish, he too could overtake McIlory, with Victor Perez needing a finish in the Top 3.

Then there's a slew of other golfers who, with a win or a Top 2 finish, could also guarantee their selection. It's a real headscratcher.

“Physically I felt great on the golf course... I don’t think I’ve enjoyed a round of golf more than playing with Shane today.”🔥

If this week's BMW PGA Championship doesn't go to plan, you'd have to imagine Padraig Harrington will have Shane Lowry's name on that plane to Whistling Straits.

Harrington has a tough decision on his hands, as it's likely he'll pick some of the Ryder Cup stalwarts to make up his captains selections.

If Lowry automatically qualifies, it'll likely make Harrington's decision easier. If he doesn't, he'll have to leave two of the likes of Ian Poulter, Sergio Garcia, Justin Rose or Henrik Stenson out.

It's unlikely Harrington will go with a rookie in Perez or Robert MacIntyre over the tournament experience of the names above.

Nonetheless, it'll be an interesting couple of days to see how it pans out. 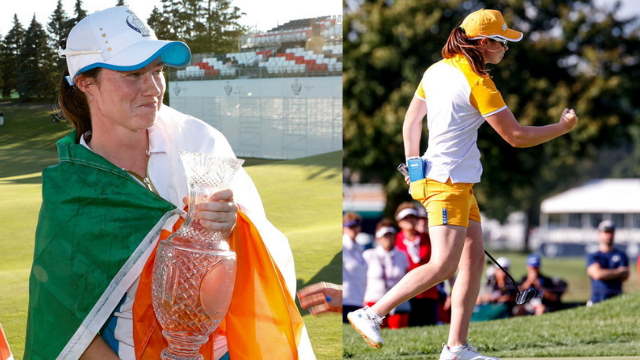