The first day of the Ryder Cup was an outright disaster for Europe and Saturday has started in the exact same fashion.

Padraig Harrington's selection decisions with Europe facing a 6-2 deficit have come in for major scrutiny in the past 12 hours. Sitting Rory McIlroy was a big call, but leaving both Tommy Fleetwood and Shane Lowry has raised a lot of eyebrows from golf watchers.

Irish fans will have been disappointed not to have seen Shane Lowry's name on the teamsheet for Saturday's morning foursomes at the Ryder Cup. It was interesting to see some American pundits have slammed Padraig Harrington for his decision to omit Lowry.

The No Laying Up podcast -one of the biggest American golf podcasts - were live on Friday night of the Ryder Cup, and they had some questions about Harrington's management of Lowry.

'You're gonna sit Lowry twice? What the fuck?!'

The folks at No Laying Up were on air discussing day one of the Ryder Cup when the pairs for Saturday's foursomes were revealed - and all of the hosts were shocked to note the absence of Shane Lowry.

Where does the time go? pic.twitter.com/38ybcOKLOc

Lowry played on Friday evening as part of a pair with fellow Irishman Rory McIlroy, but both Lowry and McIlroy were missing from Harrington's Saturday morning selections - a decision that perplexed the pundits at NLU.

Neil: So Rory and Lowry are sitting?

TC: You're gonna sit Lowry twice? What the fuck?!

TC: You're telling me that Casey's gone all three? Lowry's a dog.

Randy: I would play Lowry more than Westwood or Fitzpatrick, personally. I just think you need a guy like Lowry.

TC: I'm putting Lowry out at least three if not...

Solly: Lowry made one birdie today.

Randy: I would have played Lowry. He brings some "bloke".

The argument to play Lowry revolves mostly around his consistency, and his huge character. We've seen European team performances swayed in the past by the bombastic energy of the likes of Ian Poulter and Sergio Garcia, and Lowry certainly brought that on day one when given the chance.

On a day when the Europeans need a massive response and fightback, it seems a strange decision to omit someone as passionate as Shane Lowry from the morning pairs in favour of a steady option like the Westwood/Fitzpatrick pairing.

We expect to see Shane Lowry on Saturday evening at the Ryder Cup, but the decision to omit him from the morning sessions is not one that has gone down well with most pundits.

The No Laying Up crew were also perplexed by the decision to leave Sergio Garcia out of the afternoon games, despite him being part of the only winning European pair on Friday morning.

DJ Pie: What does Team Europe have to say about sitting Sergio out in the afternoon?

Randy: That was the plan, that was always the plan.

DJ Pie: Was it a stupid plan?

It wasn't just No Laying Up that were giving the European selections flak on Friday night. Harrington's decision to leave Tommy Fleetwood out of his morning pairings brought some criticism - mainly due to the fact the Englishman is yet to lose a single Ryder Cup game.

Dont understand Harrington's thinking. Fleetwood has yet to lose a foursomes or fourballs match in the Ryder Cup - 5 on the spin undefeated. Bizarre to drop him

Time will tell if Padraig Harrington's management of the European pairs pays off long-term, but it certainly hasn't bought him praise from American pundits. 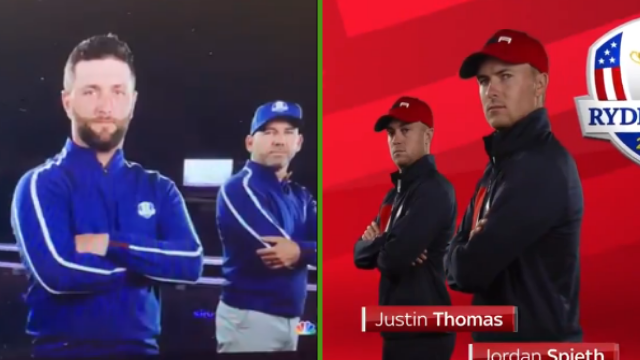 Golf
3 weeks ago
By Conor Breslin
Rory McIlroy Reveals Why He Was So Emotional After The Ryder Cup
Golf
3 weeks ago
By Donny Mahoney
'I'm Made For This': Shane Lowry Inspires Europe With Epic Putt
Golf
4 weeks ago
By Eoin Harrington
Rory McIlroy Dropped For Saturday's Ryder Cup Early Session
Popular on Balls
Football
21 hours ago
By Gary Connaughton
Mohamed Salah Confirms That He Wants To End His Career At Liverpool
26