Shane Lowry is a king. We won't have anybody tell us otherwise.

As disappointing as Europe's performance was in the opening three sessions of the Ryder Cup was, out main concern was that we didn't see half enough of the Offaly man on our screens.

Lowry was not part of the foursomes on either day, while his four ball match with Rory McIlroy last night was not given much air time due to the uncompetitive nature of the loss to Tony Finau and Harris English.

Luckily for people in this part of the world, we saw plenty more of him tonight.

Shane Lowry was in flying form right from the outset of his match against that same American pair, with his drive on the very first hole reaching the edge of the green.

That was only a taste of what was to come, with the 34-year old quickly getting hot with the putter.

He nailed a third consecutive birdie with this putt, putting his pair one up in the match as a result. His celebration wasn't exactly muted.

Somebody at Sky is getting their arse kicked for replaying Lowry dropping the F-bomb😂😂😂 pic.twitter.com/2s2Zh9P24B

In fact, Sky Sports would be forced to apologise after showing a replay of the Irishman's putt.

Shane Lowry can clearly be heard saying 'fucking come on' after nailing the putt, with the broadcaster having to apologise as result.

While they had no choice but to do so, the viewers at home thought it was a bit much.

It’s twenty to ten at night, lads. Release your clutch on those pearls.

Do sky really have to apologise for Shane Lowry swearing at 9.30pm? If you’re offended, you should have been in bed a long time ago!!

It was a bit much in fairness.

Unsurprisingly, it made little difference to the man himself who was back at it a few holes later.

Some going for Shane Lowry

You can take the man out of Ireland... 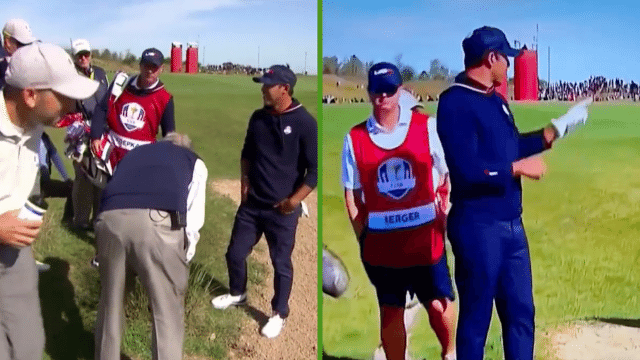