The Ryder Cup is just hours away. Can Padraig Harrington etch his name in history as a victorious European captain, or will a fresh, young, but star studded US team finally throw off the shackles and show us that team golf isn't dead in the US? It's all set up to be one of the most fascinating tournaments in many years.

On the Buildup this week, with Ladbrokes, we spoke to Rick Gehman, the host of 'The First Cut' golf podcast on CBS.

A huge talking point this week in the build-up to the tournament has been the chemistry shown by the Europeans over the years. This is something Gehman echoes:

I think on the American side, we haven't really figured that out yet. There's an aspect of the Europeans where they just pull in the same direction and they check their egos at the door."

Many of the issues facing the USA from a chemistry point of view has been the Bryson DeChambeau/Brooks Koepka feud. Something the American's have tried to address on social media.

"So I think it's hilarious that the you know, the European team releases this awe inspiring 164 - we're all part of this video."

"And the American Ryder Cup team releases a video of Brooks walking over to Bryce and talking for 15 seconds and walking away on the driving range."

Despite the well-detailed feud and the 'chemistry' angle on both sides, Rick does see some cause for concern when it comes to Steve Stricker's men.

"Colin Morikawa, the number one player in auto qualification of this, hasn't played particularly well in the last couple of weeks."

"Jordan Speith lost a little of that magic recently. Outside of Bryson and Brooks and what might end up being - I think there are other concerns."

How does this American team compare to those of past? Mick makes the point that the Americans had such strong teams back in the 1990s and the camaraderie aspect helped the Europeans match that.

"It's no contest - the raw talent the United States team is severely the favourite, but there's kind of this freedom of being the underdog if you're the European side," Gehman said.

"For those Tiger and Phil teams, what we used to hear is, well, 'I'm playing with so and so and he uses a different type of ball than me' and you know, the spins a little bit different."

"You never hear Rory McIlory say that, you're never going to hear John Rahm talk about somebody else's golf ball."

How are the Europeans perceived by the United States? Rick gives his take on how Padraig Harrington and co are being spoken about in golfing circles.

"The general US golf fan does not think much of this European team. I definitely think more highly than than that," he said.

"This is a very, very top heavy team John Rahm, Rory McIlroy, Viktor Hovland. If you want to throw Sergio Garcia into the mix."

"There's also kind of, to me, more of this this last dance feel kind of in the same way, how much longer are the Europeans going to run out Lee Westwood and Ian Poulter and Sergio Garcia?".

When it's all said and done, what's Rick's assessment on who'll win this year's Ryder Cup? He reckons it's staying with Europe.

"When you look at maybe even recent form - probably goes to the European side. Where you've got so much strife here on the on the US team, that I wonder how that impacts a lot of these big moments."

See Also: Whistling Straits: The US Ryder Cup Venue That Wants To Be Irish 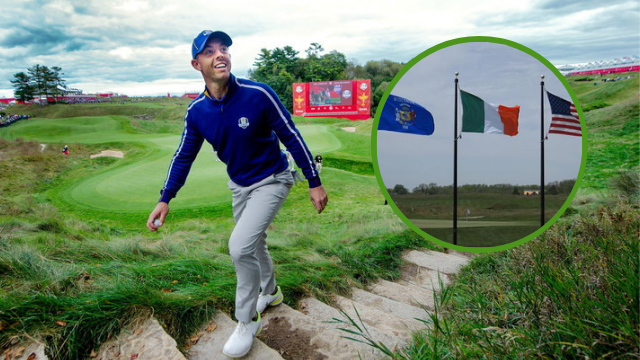 Golf
7 months ago
By Eoin Harrington
US Open Tips: Who Will Survive Torrey Pines?
Golf
8 months ago
By Eoin Harrington
US PGA Tips: Watch Out For The Europeans
Popular on Balls
GAA
2 days ago
By PJ Browne
Insane Drama As Late TJ Reid Goal Sends Ballyhale Into All-Ireland Final
Rugby
1 day ago
By Colman Stanley
Yesterday Was Not The First Time Wayne Barnes Sent A Player Off For Getting Lippy
Rugby
21 hours ago
By Colman Stanley
Champions Cup Predictions And Permutations For The Irish Provinces
The Rewind
2 days ago
By Jonathan Byrne
The Definitive Ranking: Deli Items Ranked From Best To Worst