Over the next few weeks, we'll be previewing the Festival by looking at the storylines and contenders in all of the big races with our new podcast, in association with Ladbrokes, The Buildup: Road To Cheltenham. Our very own Shaman Of Cheltenham, Aonghus Ó Maicín, is our guide on this journey, and will also cover the main storylines for each race here on site. You can listen to our first two episodes covering some of the biggest races of the festival here or read Aonghus' thoughts on the races here.

You can watch the third episode of the show below, or listen here.

Racing is nothing if not a nursery of resurrections, an arena where Lazarus himself would hardly merit a footnote. And within this unique ecosystem Cheltenham is the home of the comeback and redemption.

Though this may be an unorthodox year for the Festival, there's no reason it won't create the same tear-jerking moments that have populated the myriad compilation of highlights from the greatest show on turf. These moments, you'll find, are usually reserved for the small guy, those that grind away on midweek cards at Huntingdon or Ludlow, dreaming of the one talent that could give them a day out in a place like the Cotswolds. But every so often, it's the familiar names that draw tears from the eye.
At Venn Farm in Dorset, it's been a thoroughly sobering year. In May, Kim Gingell, Colin Tizzard's daughter and by all accounts the life and soul of his yard, died aged 43 after a short battle with cancer. The road back from the grief that comes with the territory of a sudden death in the family has been as difficult as expected for all involved with the Tizzard operation. The winners haven't galloped home as frequently as they have previously when the English trainer saddled winners in the King George VI Chase, the Stayers' Hurdle, the Melling Chase and, most notably, the Cheltenham Gold Cup in 2018.
Such an illustrious resume makes it seem preposterous that strangers will be cheering him on towards another big winner as if he's just the latest small-time trainer to pop his head above the parapet. In a way though, he has more in common with them than with those he shares company with within Britain's top tier of trainers.

Retaining his distinctive West Country accent - which may fool some into believing he moonlights as a member of the Wurzels - he continues to raise cattle despite the success other residents on his farm have brought. What's more, he's built his humble empire on a foundation of his own toil. Silver spoons weren't to be found in Young Tizzard's mouth. But the primary reason for everybody rowing in behind the man is the fact that a big win could be a hugely apt commemoration of his daughter whose loss must surely still leave raw wounds on her father, his yard and indeed the horses it homes.
The form book doesn’t suggest this will be a red-letter year for the operation.
Neither does the hot form of other yards arriving into the Festival with ominously-impressive runners.
But the heart suggests otherwise.

And if Cheltenham has taught the public anything over the last century, it’s that the heart doesn’t acquiesce to the head inside the gates of Prestbury Park. 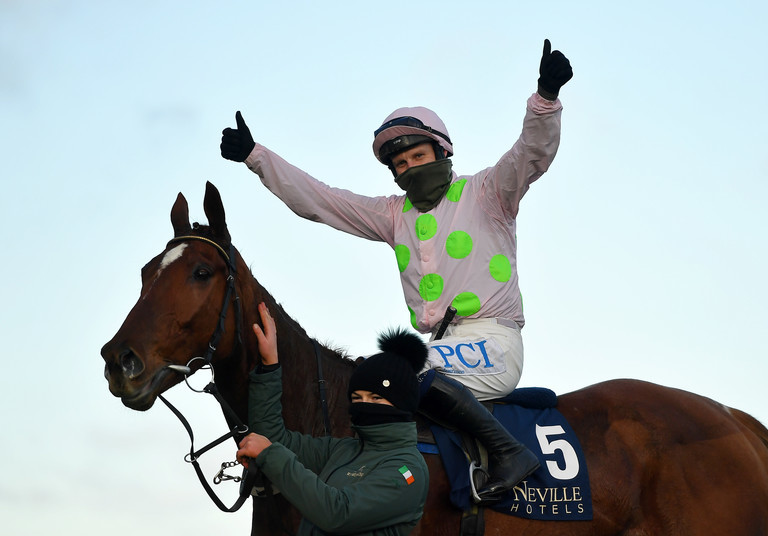 Paul Townend celebrates after riding Monkfish to victory in the Neville Hotels Novice Steeplechase at the Leopardstown Christmas Festival. Photo by Seb Daly/Sportsfile

Monkfish and Envoi Allen arrive into the Festival as bonafide bankers, their respective wins seeming inevitable ahead of a long-awaited tussle in next year’s Gold Cup. Yet for every runner that has risen from nowhere at the meeting, a giant has fallen; and though both horses seem free of faults, their respective destinies are far from secured until they canter past the winning post.
The latter of the aforementioned has been on a one-way journey towards immortality since winning a point-to-point at Ballinaboola in February 2018. Since then he has gathered five Grade Ones, two of those coming at Cheltenham in March, and has never looked like anything other than a reincarnation of Arkle. For Gordon Elliott, losing this horse just before he entered his prime is a level of punishment no racing authority could match. Watching not only the best horse he has ever trained but possibly the best horse he has ever seen must be a gut-wrenching prospect for the Meath trainer as he deals with the aftermath of his “moment of madness”.
There is credible opposition in the form of Chatham Street Lad, an opponent worthy of respect after a statement win at the venue earlier in the season.  Michael Winters, his trainer, and the Mayo connections brought a carnival atmosphere to Cheltenham in December when the horse romped home to a 15-length win in the Caspian Caviar Gold Cup. Likewise, Shan Blue and Chantry House have done little wrong. In competition against the horse now trained by Henry de Bromhead though, doing very little wrong will never suffice on its own.

Despite this, Monkfish has outdone the Marsh Novices’ Chase favourite with the level of hype he has garnered across the current season. A jumping performance of consummate perfection at the Dublin Racing Festival saw him installed as favourite for next year’s Cheltenham Gold Cup despite the fact that Al Boum Photo may be arriving into the race as a three-time winner and that Envoi Allen had yet to reveal a clink in the armoury.
Whispers from Closutton seem to suggest they believe this is one of the best horses they have ever put through their hands. That in itself is a frightening prospect. On the face of it, a win here appears certain, with most of the primary rivals in the contest opting against taking on the machine. Eklat De Rire will probably line up here though he seems to be relatively unexposed in comparison while Sporting John has yet to prove it over three miles under rules and Philip Hobbs is likely to run him over the shorter trip should the ground soften.
However, The Big Breakway, underperforming for most of the season, provides Colin Tizzard with a chance to bookend a dolorous year. The six-year-old will have to put the immaturity of his previous two runs behind him and hope that he produces a career-best performance if he's to overcome a horse boasting the reputation of the favourite. But dig into the underperformance and it’s obvious that the ingredients are there for a champion racehorse to take shape. Should there be a good pace set and should Tizzard manage to iron out the wrinkles in his jumping, The Big Breakaway is set to have a major say in a battle up the hill.

The Tizzards may just be set for a big Festival after all they've endured and The Big Breakaway could be the one to instigate the much-needed momentum.
Another resurrection at Cheltenham hardly seems the boldest of predictions. 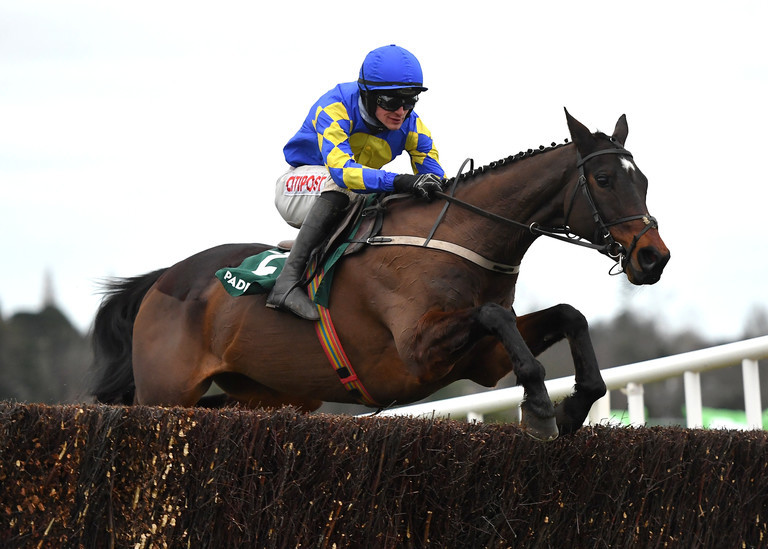 Thursday’s main event also offers a healthy selection of feel-good possibilities. For some, this has already been reduced to a two-horse event between rivals that have already raced each other twice this season - Paisley Park and Thyme Hill. Strong cases can be made for both but the three-mile hurdle contest goes beyond the exploits of its two most prominent names.
Sire Du Berlais has always disappointed away from Cheltenham, but that seems an irrelevant talking point as the Festival begins to loom. When he comes to the one place that matters, Sire Du Berlais delivers. He won the Pertemps Final off top weight in 2020 and won carrying a solid weight around Gloucestershire in 2019. The Willie Mullins-trained Kemboy has meanwhile proven that he boasts an innate ability to surprise, and could easily compound expectations again despite not jumping over hurdles since April 2017. It’s no surprise that when Mullins needed to find a contender for the race, it was the mercurial nine-year-old star who put the hoof up above the stable door. Dismiss at your peril as this is a talent that, rather ironically, leaves his trainer perplexed when trying to predict his next moves. These are all live contenders, all worthy of consideration, all responsible for ensuring connections have headed home from a day at the racecourse wheeling barrows of winnings.
But one more name is deserving of consideration at the very least. It was only last year when Lisnagar Oscar provided Rebecca Curtis with an unlikely win in the championship race. Curtis is no stranger to Festival winners but this was without doubt the biggest win of her career. She has proven that she can prime a horse for the grand stage when training the 50-1 winner in last year's renewal, and still the champion appears to be overlooked yet again. There’s a lot to like about the eight-year-old even if he hasn’t won this season. He didn’t win prior to last year’s triumph either, though there was a clear bell curve heading towards a peak at Cheltenham. That same curve is evident again in 2021, lacklustre performances pre-Christmas preceding a commendable showing in the Rendlesham Hurdle at Haydock. And it could be deduced that the horse is arriving into the Festival in better form this year than last.

Curtis and Lisnagar Oscar probably never received the plaudits they deserved following last year’s performance.
Repeat the trick this year and they won’t be as easily ignored in 2022.

SEE ALSO: The Road To Cheltenham: The Arkle & The Champion Chase 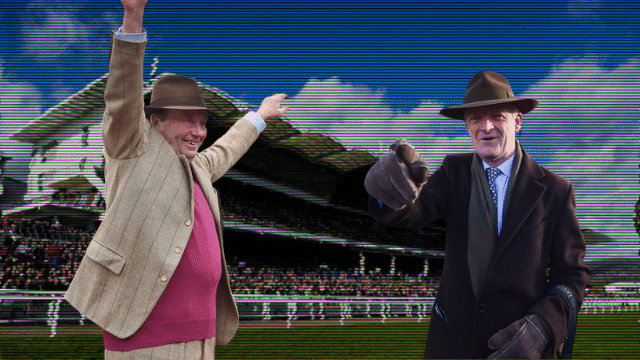 Cheltenham The Buildup The Road To Cheltenham podcast

Horse Racing
1 month ago
By Andrew Blair White
Five Heroes of The 2022 Cheltenham Festival
Horse Racing
1 month ago
By Leah Hogarty
Flooring Porter: A Horse That Has Brought So Much Joy To So Many Ordinary People
ladbrokes
1 month ago
By Donny Mahoney
Rachael Blackmore Had An Inspiring Message For Young Fans After Gold Cup Win
Popular on Balls
GAA
3 days ago
By PJ Browne
Mayo's Padraig O'Hora Using Football To Promote His Real Passion
Rugby
1 day ago
By Colman Stanley
'That Pace, That Intensity, That Organisation' All Black Legend Has High Praise For Leinster
GAA
1 day ago
By PJ Browne
Jim McGuinness's Gut Tells Him Dublin Will Win The All-Ireland
The Rewind
2 days ago
By Eoin Harrington
Watch: Brilliant Dermot Morgan Dublin Segment From 'The Travel Show' Resurfaces