"We'll be getting booed all the way to the hotel!" joked Sam Twiston-Davies after he rode Clan Des Obeaux to victory in the Ladbrokes Punchestown Gold Cup on Wednesday evening.

"An Irish Gold Cup," the jockey told RTÉ, "it's a bit childish but it is the stuff that dreams are made of. To come over here and do it like that, to be aggressive everywhere. You are always a little bit wary because I didn't know the track that well."

"An Irish Gold Cup... It is the stuff that dreams are made of to come over here and do it like that," says Sam Twiston-Davies, who rode raider Clan Des Obeaux to victory at Punchestown | Watch #PTown21 live https://t.co/AZlEpmDpcs pic.twitter.com/WWHR3w1CdW

It is Nicholls's third victory in the race.

"He's come to the lion's den. They got a hiding in Cheltenham that they'll probably never get over. Still, he packed up the box and came over here, took us on in our own backyard, and beat our best horse, Al Boum Photo.

"Full marks to Sam Twiston-Davies. That was a real gutsy ride." 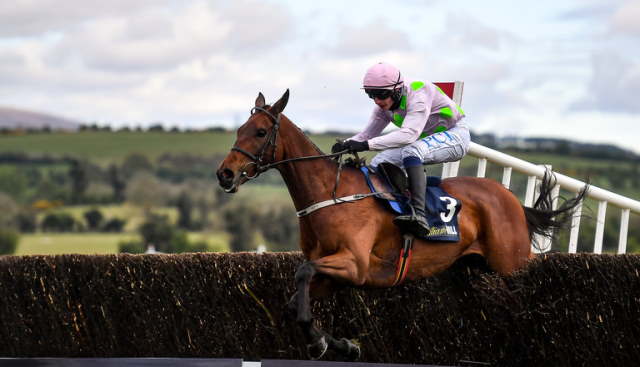 Horse Racing
3 weeks ago
By PJ Browne
Kerryman Oisin Murphy Rides To Thrilling Comeback Victory In Newcastle
Horse Racing
1 month ago
By Jonathan Byrne
"Male, Female, It Doesn't Matter Anymore" Rachael Blackmore Shines On Late Late
Horse Racing
1 month ago
By Eoin Harrington
Watch: Tributes Paid To 79-Year-Old Trainer Jim Bolger After 2000 Guineas Win
Popular on Balls
Football
12 hours ago
By Eoin Harrington
'I Think It All Started With Roy Losing His Temper!' - Vieira, Keane And Neville On Highbury Tunnel Incident
Football
18 hours ago
By Michael McCarthy
Marko Arnautovic Gets One Game Ban - Is It A Cop Out?
Football
19 hours ago
By Donny Mahoney
VAR At The Euros Has Proven How Poor Premier League Refereeing Is
Athletics
21 hours ago
By Michael McCarthy
Don't You Just Hate When You Eat A Burrito And Test Positive For Steroids