Willie Mullins took yet another victory on Thursday at Punchestown, as Energumene cruised to victory in the Ryanair Novice Chase.

Cork jockey Paul Townend rode Energumene for the 6:35 race and led from the start as expected. Rachael Blackmore followed at a distance atop Captain Guinness for most of the race before fading to third and eventually falling at the last fence, with another Mullins horse, Janidil, coming home in 2nd and Zarakareva in 3rd.

⭐️ Energumene - what a talent

Townend was in flying form after the race and spoke to RTÉ about the race, which he won with ease.

You know, for a novice to go out and put in a display like that is special as well. It got a little bit tight at the second last and the last, but probably the worst thing I could have done was have a look and see that I had it in the bag and then, you know, I took my foot off the accelerator a little bit. But he has a lot of fences jumped and from day one he's been electric over fences and he's sorted himself out."

Paul Townened was smiling after Energumene coasted home to edge him one step closer to the Champion Jockey title | Watch #PTown21 live every day on @RTE2 pic.twitter.com/xq4WBCoAcE

There was a brief wobble for Energumene at one of the earlier fences in the race, but he recovered impressively and pushed on to a dominant win. Townend was asked by RTÉ about giving the horse "a squeeze" after the wobble, and spoke highly of his recovery.

"To be honest it's hard to resist giving him a squeeze everywhere! Because he's just so much fun on his back and he does it with ease. You want to go down and send him everywhere, but someday he's gonna have to sort himself out and he's learning to do so now. He's class, he's a joy to ride and I'm very lucky to get back up on him today."

The win for Energumene was Mullins' sixth win in a row at the Ryanair Chase at Punchestown, and he will be hoping that his horses' fine form continues into the weekend at the festival. 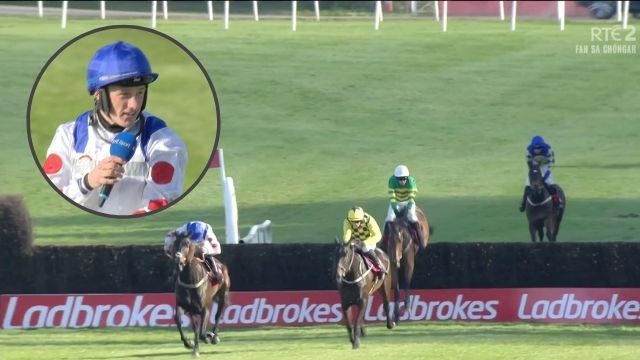 Horse Racing
2 weeks ago
By Michael McCarthy
Punchestown Tips: Your Guide To Day Three Of The Festival

Horse Racing
2 weeks ago
By Michael McCarthy
Punchestown Tips: Your Guide To Day Three Of The Festival
Popular on Balls
Snooker
23 hours ago
By Gary Connaughton
Graeme Dott Says He Changed Views On Ronnie O'Sullivan After Touching Phone Call