Nina Carberry Has Some Intriguing Outside Bets For The Punchestown Festival

Very few people have as much experience of the Punchestown Festival as Nina Carberry. The former Irish Grand National winner has been immersed in National Hunt Racing all her life, as the daughter of legendary jockey and trainer Tommy Carberry, before becoming a jockey herself, riding an incredible 22 winners at the Punchestown Festival down the years, including in her final ever race in 2018, on board Josies Orders

Nina joined us on The Buildup this week to look ahead the festival to and pass on some intriguing outside bets for Punchestown.

You can listen to the full show below where Nina breaks down the big races of the week, including the Champion Chase, Gold Cup, and Champion Hurdle. She also looks ahead to one of the most anticipated races of the week when Monkfish and Envoi Allen go head to head in the Dooley Insurance Group Champion Novice Chase at 6.30 tonight.

Nina Carberry's Outside Bets for Punchestown:

Jesse Evans of Noel Meade is quite interesting.

He's a horse I've been watching quite a while. He ran very well in the Galway Plate on better ground, and he just probably didn't get up the hill. But as soon as he gets better ground he always runs a good race. I think he's in at a nice weight so he could be a nice each way bet - The West's Awake for Edward O'Grady.

And, three years after her final ever race on board Josies Orders, Nina fancies the now 13 year old to get the job done again this week!

Josies Orders won obviously down in Cork over hurdles, so he's going in as a 13-year-old. I think the ground will really help him. I'm looking forward to seeing Josie's Orders. I think he won't be far away. He's still going strong and I think he's in as good a form as he's ever been.

Nina was also strong on a couple of more favoured horses at the Festival. Unfortunaltey, Cheltenham Gold Cup winner Minella Indo has been forced to pull out of the Ladbrokes Punchestown Gold Cup on Wednesday, but another favoourite from Tuesday also caught the eye in Youcannotbeserious, who will go off in 7.00, and is currently 11/10 on Ladbrokes.com.

SEE ALSO: Punchestown Tips - Our Guide To A Fascinating Day One Of The Festival 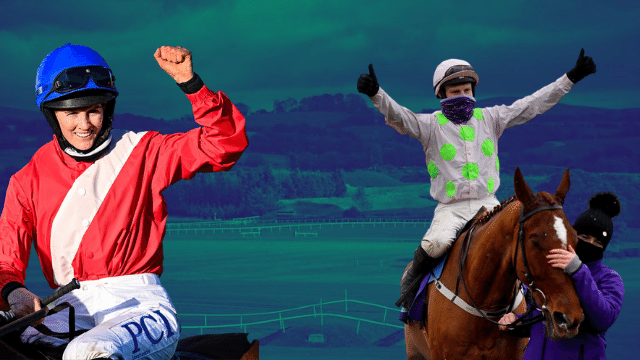 Horse Racing
2 years ago
By Maurice Brosnan
The Uncomfortable Moments That Make This Sports Documentary Unmissable
Horse Racing
3 years ago
By Arthur James O'Dea
Jockey Nina Carberry Bows Out In Style With One Last Winner
Horse Racing
5 years ago
By Gavan Casey
Bad News For Racing Fans As Ruby Walsh Is Ruled Out Of Tomorrow's Grand National
Popular on Balls
Football
19 hours ago
By Jonathan Browne
Reports: Solskjaer's Coaching Staff To Stay On At Old Trafford As Rangnick Appointment Confirmed
Snooker
1 day ago
By PJ Browne
Shaun Murphy Apologises Over Timing Of 'Amateur' Comments
Snooker
20 hours ago
By PJ Browne
Selby Crashes Out Of UK Championship On Dramatic Respotted Black
33