Watch: Fellow Jockeys Record "Stand By Me" For The Late Pat Smullen

Today marks a year since the sad death of the great Irish jockey Pat Smullen after a long battle with pancreatic cancer. The Offaly native was just 43 when he tragically passed away in St. Vincent's Hospital in Dublin.

The winner of 12 classics, including the 2016 Epsom Derby, Smullen was also one of the most beloved figures in racing. Exactly a year to the day before his death, he spearheaded a massive charity initiative by hosting the Champions Race for Cancer Trials at The Curragh, where he raised an astonishing €2.5million for pancreatic cancer trials.

In one of the most brilliant interviews we can ever remember, he also revealed to RTE on the day that he had recently suffered a set back in his recovery. Exactly a year later, he was gone.

This interview with Pat Smullen is among the most memorable moments we ever had on #RTERacing as he modestly described his bravery and discussed raising millions in The Pat Smullen Champions Race For Cancer Trials. RIP to an Irish racing great.pic.twitter.com/B3irBtXwnQ

Gone, but certainly not forgotten. His charitable soul has inspired many others, not least his former colleagues. To celebrate his anniversary, his former weigh room colleagues teamed up with the Newbridge Gospel Choir to record a version of Ben E. King's Stand By Me. The song features solo vocals by Smullen's fellow jockeys Declan McDonogh and Donagh O'Connor. The song was recorded at The Curragh and played out on the course's PA system to the crowd at last Saturday's racing, as well as being aired on RTE's Racing coverage.

Smullen's wife Frances Crowley chose the song and has revealed the family plan to release the recording as a single to raise more funds for Cancer Trials Ireland.

Speaking afterwards, she explained that they would hopefully get the support to release the song and continue Pat's wonderful legacy of raising money.

They were all apprehensive to start with but they all seemed to enjoy it in the end. Declan McDonogh and Donagh O'Connor were pushed well outside their comfort zone by performing solos but they did a fantastic job and it worked really well.

We had people asking us if we were releasing it and that's what put the idea into our heads. Wouldn't it be great if we could raise some more funds for Cancer Trials Ireland? We've put the idea out there and hopefully something comes of it. 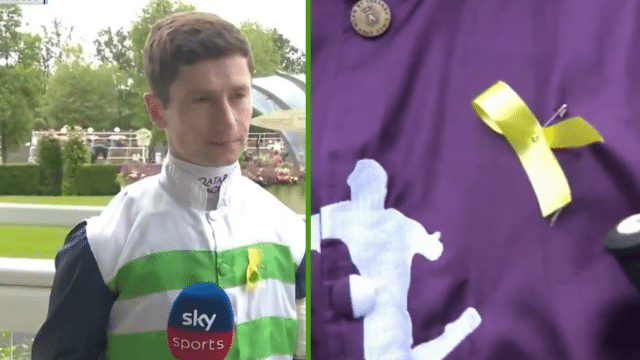