The Irish sporting world is in mourning today after news emerged last night of the death of Pat Smullen. Smullen had been battling pancreatic cancer since March 2018, and sadly passed away yesterday at St. Vincent's Hospital in Dublin, aged just 34.

Smullen was one of the finest jockeys of his generation, crowned Irish champion jockey nine times, and winning 12 Classics in Ireland, Britain, and France, including the 2016 Epsom Derby.

Pat Smullen was a wonderful jockey and a tremendous ambassador for racing in and out of the saddle.

Here's his proudest moment as a rider, when winning the 2016 Derby at Epsom aboard Harzand in the silks of the Aga Khan for trainer Dermot Weld. pic.twitter.com/LpdJpyTKgT

However, as much as incredible racing prowess, Smullen's dignity and class, as well as his tireless work, since being diagnosed two and a half years ago will be what he's remembered for.

The Rhode native spearheaded a huge charity initiative last year, raising over €2.5million for pancreatic cancer trials. Ironically a year ago to the day of the death, Smullen ran the Champions Race for Cancer Trials Ireland at The Curragh, an event which gathered massive support. Smullen was due to ride the race, but told RTE the same day that he had experienced a recent set back in his recovery.

This interview with Pat Smullen is among the most memorable moments we ever had on #RTERacing as he modestly described his bravery and discussed raising millions in The Pat Smullen Champions Race For Cancer Trials. RIP to an Irish racing great.pic.twitter.com/B3irBtXwnQ

Smullen is survived by his wife Frances, and their three children, Hannah, Paddy, and Sarah.

Naturally, there was a huge number of tributes for a great man, led by President Michael D. Higgins.

President Higgins has expressed his deep sadness at the untimely death of champion jockey Pat Smullen, saying his remarkable performances at home and abroad brought joy to so many.
The President conveys his sincere condolences to his family, wife and children.

Saddened to hear of the passing of Pat Smullen. An outstanding jockey, loved in the racing world, and who made so many people so happy. Our thoughts and prayers are with his wife Frances and his family. RIP

Walked off the field tonight after a brilliant u20 hurling match to hear that Pat Smullen had died. 11 years ago today my late wife Edel also passed away at just 41. Both beautiful, decent & kind people. So sorry Frances, Hannah, Paddy & Sarah. Rest in Peace Pat.

It is so sad to hear of Pat Smullen’s passing he was an unbelievable inspiration to us all, an amazing Father, Husband, Friend & Jockey He will be so sadly missed our thoughts and prayers are with Frances, Hannah, Paddy, Sarah and all of his Family RIP

I never saw courage like this - Pat Smullen was a truly special man. pic.twitter.com/xGfySKRzwd

Pat Smullen was that rare breed of a genuine great at what he did, yet utterly decent and unpretentious about that greatness. RIP Pat.

Tonight Rhode Mourns the Loss Of One Of Its Finest Sons Pat Smullen. Our Sincere sympathy to the Smullen & Extended Families, Colleagues and Friends on the loss of a through Legend.
Sleep Easy Pat💚💛 pic.twitter.com/mVfxWsfduT

Heartbreaking news about Pat Smullen tonight. He raised close to €3 million!!! - for pancreatic cancer. Amazing man. Here’s a clip of him speaking to me so modestly about his astonishing fundraising achievements for @cancertrials_ie last November. Love to Frances and the family pic.twitter.com/L4tTbK5Fg5

Why is Twitter united in praise for Pat Smullen? Yes he was a great jockey but he was an even greater person pic.twitter.com/KGdbWQLOnF

This is unbearably sad. Derby winning jockey Pat Smullen was only 43 years old - such a lovely man and a beautiful rider. I will never forget his grace, his loyalty, his humour and his quiet determination. Love and condolences to his family. https://t.co/bHjMIsNOLG

So sad, Pat Smullen, was an Irish sporting legend. I was so fortunate to spend time with Pat last year in Kildare when we judged the Paddy Power Irish Derby LipSync Battle. I was struck by how humble, modest & genuine this gentleman was. My thoughts with all his family, RIP Pat. pic.twitter.com/1US6XjOG7T

I am sad now this evening with the news of Pat Smullen , my thoughts and love are with him & his family .. what a great man .. a lovely man , an Irish man , & one of the finest jockeys the sport has even seen ... May he be at peace now .. 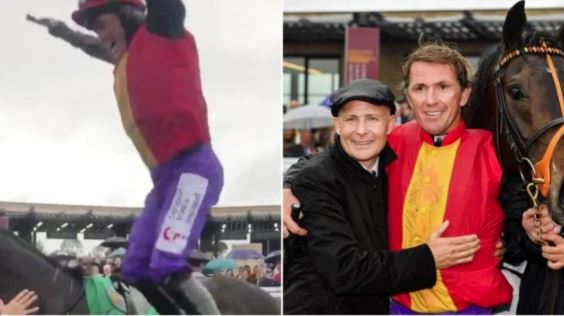