Rachael Blackmore Back On The Saddle After Tough Injury Layoff

Grand national winning jockey Rachael Blackmore is back in action this weekend after suffering a few months out due to injury.

The Tipperary woman will be on board the Henry de Bromhead trained Balko Des Flos in the W.B. Gavin & Co. Handicap Hurdle.

It's an interesting set of affairs to mark Blackmore's return. Balko Des Flos was the horse she beat into second at Aintree earlier this year.

There's no doubt that that the two-time Irish Champion Hurdle winner will be eager to get back on the saddle after a devastating fall in July.

Over the past few months, the champion jockey has been recovering from injuries sustained at a meeting in Killarney in July.

That day she suffered a fractured ankle and hip after falling off Merry Poppins in the Download The BoyleSports App Handicap Hurdle, having won the prior race on Baltinglass Hill.

The medics were rushed onto the course to treat Blackmore for half an hour or so, before she was taken to in an ambulance to a nearby hospital.

Rachael Blackmore has been rushed to hospital following a fall at Killarney.

"It's part and parcel of the job, unfortunately," Blackmore told RTÉ Sport in September. "The recovery has gone really well and the doctors are all happy with my progress."

"I'd say I'll be riding out maybe by the end of the month and hopefully back racing in the next couple of weeks." Her October return date looks to be coming to fruition.

Blackmore has quickly become a dominant force in the horse racing world after her stellar runs at Cheltenham and Aintree in particular.

She had 103 rides this past season and rode 22 winners overall. At Cheltenham in March, she partnered Honeysuckle to a win in the Champions Hurdle.

Her landmark day as the first female to win the Grand National on board of Minella Times made worldwide headlines just a month or so later.

Rachael Blackmore has made history as the first ever female jockey to win the Grand National, riding Minella Times to victory. 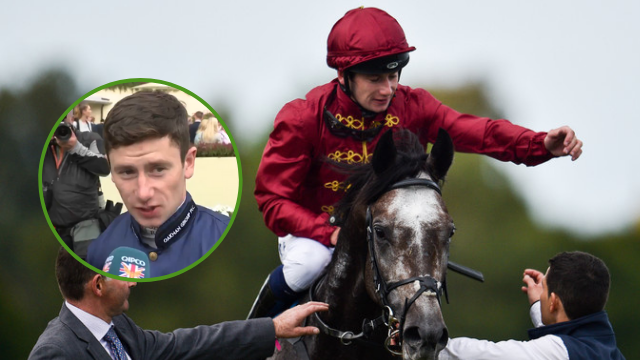 Horse Racing
6 years ago
By Gary Reilly
RTÉ Tried To Report Live From Galway Races And They Really Shouldn't Have Bothered
Popular on Balls
GAA
3 days ago
By PJ Browne
Mayo's Padraig O'Hora Using Football To Promote His Real Passion
Rugby
1 day ago
By Colman Stanley
'That Pace, That Intensity, That Organisation' All Black Legend Has High Praise For Leinster
GAA
1 day ago
By PJ Browne
Jim McGuinness's Gut Tells Him Dublin Will Win The All-Ireland
The Rewind
2 days ago
By Eoin Harrington
Watch: Brilliant Dermot Morgan Dublin Segment From 'The Travel Show' Resurfaces