Tipperary jockey Rachael Blackmore made history on Saturday when she became the first female jockey ever to win the Grand National. It's been an incredible few weeks for Blackmore, after a similarly breathtaking run of results at Cheltenham.

Blackmore was riding Minella Times for Henry de Bromhead at Aintree and stayed in touch with the leaders before making a run for the lead with two fences to go. She never looked back and took a commanding win in one of horse racing's most famous events.

⭐️ What a ride on Minella Times!
⭐️ What a year she's had!
⭐️ What a jockey!#GrandNational | #VMTVRacing pic.twitter.com/u2sWKSExhj

Speaking to ITV after the race, Blackmore was clearly stunned with the result and praised de Bromhead for his work in training Minella Times.

I just cannot believe it! He was an absolutely sensational spin. What Henry de Bromhead does with these horses I don’t know, but it’s…I’m so lucky to be riding them!

I just can’t believe I’m after winning the Grand National! This is unbelievable!

De Bromhead deserves heaps of praise himself in the aftermath of the race, as second placed horse Balko des Flos was also a de Bromhead-trained horse.

It's been a special year for the Waterford man, who also claimed a winner in the Cheltenham Gold Cup. Speaking to ITV, he spoke highly of his winning jockey.

She's just brilliant, isn't she? We're so lucky to have her. She's just - they broke the mould after her, she's brilliant!

Blackmore and de Bromhead will both surely be overwhelmed with plaudits in the days to come, but Blackmore was also full of praise for her horse, Minella Times, who pushed perfectly in the closing stages of the race.

He was just incredible, he jumped beautifully. I was trying to wait for as long as I could and, you know, I didn’t feel crossing the  I was running away.

When we hit the last and I asked for a bit, he was there and…it’s just incredible!

It was a special day for Irish racing fans, with an Irish jockey winning a historic Grand National atop an Irish-trained horse. Rachael Blackmore's closing words to ITV summed up the immense pride and emotion of the occasion.

I don’t feel male or female right now, I don’t even feel human, this is just unbelievable!

It's certainly been a superhuman few weeks for Blackmore - long may it continue! 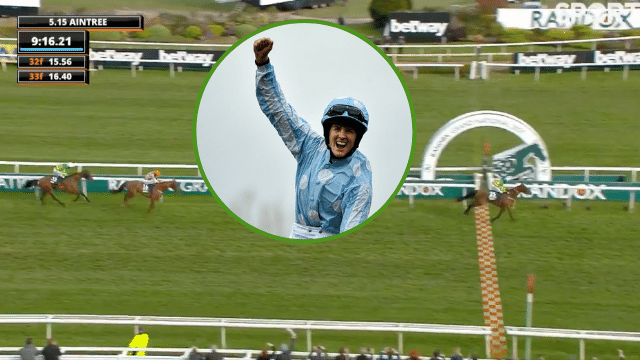 Horse Racing
10 months ago
By Michael McCarthy
Tributes Pour In For Grand National Winning Jockey Liam Treadwell Who Has Died
Horse Racing
2 years ago
By Aaron Strain
In Pictures: Tiger Roll's Heroic Return To Summerhill Looked A Blast
Horse Racing
3 years ago
By Gavin Cooney
The Aintree Grand National Tipster Table Is Here
Popular on Balls
Rugby
21 hours ago
By Eoin Harrington
Mike Brown's 16-Year Harlequins Career Is Over After Stamping Ban Issued
Other Sports
22 hours ago
By Balls Team
12 Of The Most Cringeworthy Moments In Sporting History
The Rewind
19 hours ago
By Balls Team
The 5 Best Irish Accents By Foreigners In Cinema History
The Rewind
19 hours ago
By Donny Mahoney
The Best And Worst British Media Coverage Of The Ballymurphy Verdict