Robbie Dolan, an Irish jockey based in Sydney, has been making amazing progress in a rather unexpected arena. Dolan has made it through the callback phase of the Australian version of The Voice, the singing talent show.

The Voice has the judges initially facing away from auditionees, and they must choose to turn around if they are impressed by the voice of the contestant.

Having done enough to make it through his first audition, Dolan continued to impress during the callback shows, and his rendition of Lewis Capaldi's 'Before You Go' sees him through to the last preliminary round before the semi-finals.

It's certainly a change of pace from the race track, but Dolan doesn't seem a bit out of place in front of a microphone.

Robbie Dolan: Irish jockey makes it past callback phase of 'The Voice'

Robbie Dolan has seen some decent success in his jockeying career since settling in Australia in 2017. He has ridden 233 winners over the course of his time in Australia, but his latest exploits are quite detached from riding horses.

Doyle has been competing on The Voice Australia for the past few weeks, and Wednesday's episode saw him pass through the "callback" phase with flying colours and progress to the "battle rounds". Doyle managed to make it through with a brilliant version of Lewis Capaldi's 'Before You Go'.

Congratulations to Irish jockey @ZRKD who is based in Australia, he has made it through the call back stages on @TheVoiceAU 👏

Best of luck Robbie, from all your racing family in Ireland 🇮🇪 pic.twitter.com/ddaL8w03UC

Dolan spoke to Thoroughbred Racing earlier this year about his decision to audition for The Voice. He said that he had always enjoyed singing, but that his focus on racing had prevented him from focusing on it:

Singing has always just been a hobby to me. I did school plays years and years ago and always really enjoyed singing.

Racing took over my life but just recently I’ve started to learn guitar and try to do a few gigs. It’s a step away from racing. I’d love to get into it but it’s hard to have two lives and racing is everything at the moment.

They are very different worlds but once I got the opportunity to perform on The Voice I was like, ‘Why not, what have I got to lose?’

His initial audition saw him impress the judges with an amazing performance of James Bay's 'Let it Go'. The disbelief on the faces of Rita Ora and Jessica Mauboy when Dolan reveals he is a professional jockey is a particular highlight.

WOW, Jockey Robbie Dolan may not know much about music but he sure can sing! #TheVoiceAU pic.twitter.com/DZSepVePyO

After the audition, Dolan had the choice of whether to team up with Rita Ora, Keith Urban, Jessia Mauboy, or Guy Sebastian as his coach. He ultimately went with Ora, who appeared blown away after his audition:

The fact you haven't got a clue how good you are is probably the reason why everyone watching is falling in love with you every time you speak through that microphone. You are creating a whole new book for The Voice, for people who had no idea they could hold a note.

We never thought we'd say this, but we'll certainly be keeping a close eye on The Voice Australia in the coming weeks to keep tabs on Kildare native Robbie Dolan's progress. 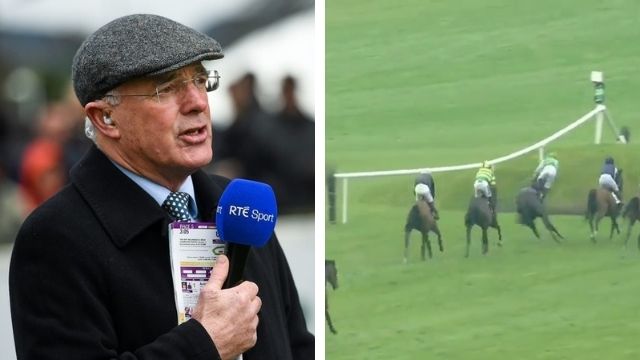 Horse Racing
2 weeks ago
By PJ Browne
Ted Walsh Apologises For RTÉ Comments During Punchestown
Horse Racing
3 weeks ago
By Eoin Harrington
Tributes Paid To Retiring Robbie Power At Punchestown
Horse Racing
3 weeks ago
By Jonathan Byrne
Mullins And Townend Strike Again In Ladbrokes Punchestown Gold Cup
Popular on Balls
Football
6 hours ago
By Eoin Harrington
Juan Mata Questions Manchester United Management After Dire Season
Golf
2 days ago
By Gary Connaughton
Padraig Harrington Glad He Didn't Have To 'Make A Decision' On Saudi Golf League
Football
1 day ago
By Gary Connaughton
The Frank Lampard Love-In After Everton's Survival Was Downright Bizarre
GAA
2 days ago
By PJ Browne
'It Came At An Awkward Time. I Didn't Think It Would Be So Bad'