Wexford Jockey Flew Himself To Cheltenham For First Festival Winner

Sean Flanagan had his first ever Cheltenham winner on Tuesday, riding 80/1 shot Jeff Kidder to victory for Noel Meade in the Boodles hurdle.

Remarkably, the Wexford jockey flew himself to the Cotswolds for the festival.

"A first success for Sean Flanagan, flew himself over, and rode a winner," Ruby Walsh told Racing TV's The Road To Cheltenham Wrap.

"He flew himself over. It was his last flight with his instructor to get his licence. He passed his test, got his pilot licence, and rode his first Cheltenham winner."

Flanagan took over from Paul Carbery as Meade's stable jockey in 2016.

"As I said when I got the opportunity, I was never going to fill those boots," Flanagan told ITV Racing.

"I said I'd pull up my own ones and see how we get on. Noel has been stellar for my career; if I didn't have him, I wouldn't be riding. I can't believe I'm after riding a festival winner, it's my third winner in the UK.

"Coming here, we knew he was in great form. Noel was adamant that he had a big chance. I just worried that he hadn't got enough experience but then again they're all in the same boat [in this race]. In Fairyhouse, he won on very heavy ground. The bit of nicer ground today brought out the best in him." 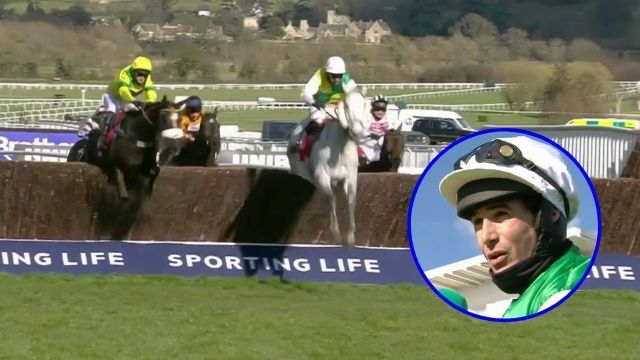 Horse Racing
1 month ago
By Andrew Blair White
Five Heroes of The 2022 Cheltenham Festival
Horse Racing
1 month ago
By Leah Hogarty
Flooring Porter: A Horse That Has Brought So Much Joy To So Many Ordinary People
ladbrokes
1 month ago
By Donny Mahoney
Rachael Blackmore Had An Inspiring Message For Young Fans After Gold Cup Win
Popular on Balls
GAA
3 days ago
By PJ Browne
Mayo's Padraig O'Hora Using Football To Promote His Real Passion
Rugby
21 hours ago
By Colman Stanley
'That Pace, That Intensity, That Organisation' All Black Legend Has High Praise For Leinster
GAA
22 hours ago
By PJ Browne
Jim McGuinness's Gut Tells Him Dublin Will Win The All-Ireland
33