The Road To Cheltenham: The Gold Cup

Over the last few weeks, we've been previewing the Festival by looking at the storylines and contenders in all of the big races with our new podcast, in association with Ladbrokes, The Buildup: Road To Cheltenham. Our very own Shaman Of Cheltenham, Aonghus Ó Maicín, is our guide on this journey, and will also cover the main storylines for each race here on site. You can listen to our first four episodes covering some of the biggest races of the festival here, and including our special preview night with the likely top jockey of the Festival Paul Townend, or read Aonghus' thoughts on the races here.

You can watch the final episode of the show below, focusing on Friday's Gold Cup, or listen here.

One white sock, keep him not a day;

Three white socks, sell him to a friend;

Four white socks, keep him to the end.

If there's a more irrefutable gauge for identifying winners, this wide-eyed bluffer has yet to come upon it. You can study the ground and the form and the trends and stats, and you can trawl through the infinite reel of old races and new; but if still awaiting the winner to jump up from the racecard, look no further than the aforementioned rhyme

In what looks to be an intensely competitive Gold Cup field, a case easily being made for and against every runner, only the attributes of one suggest you "keep him to the end".

When making the case for white-socked Native River though, you can draw from more than the quill of the wordsmith with a fondness for white-socked nags. This is, after all, the only horse in the field outside Al Boum Photo that has previously won the blue riband event, claiming victory at the Festival in 2018. 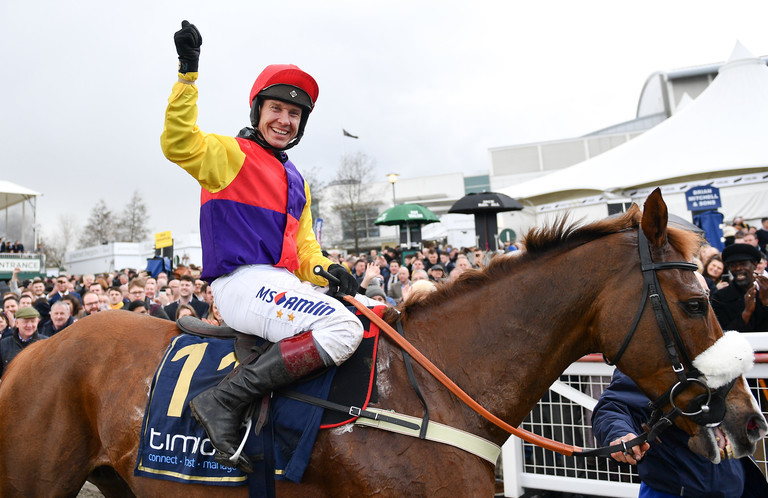 For those with only a faint interest in the sport, that race alone gives an interesting insight into a horse that is, for some inexplicable reason, heading into this year’s race largely overlooked. Everyone knew how Richard Johnson would ride the Colin Tizzard-trained runner that day. He’d jump out, make the running and ensure that whatever horse won the contest would be forced to earn it the hard way. The pair have been doing the same ever since.

Might Bite was the Gold Cup favourite that year, and though he had his quirks, his propensity to roam across the Cotswolds being particularly evident in the previous year’s RSA Chase, he had all the talent and form deserving of favouritism. Since that performance at the 2017 meeting where he galloped back to claim the lead and hence victory, after initially looking like he had decided to call it a day early and head home towards the paddock, he put together a flawless record, winning at Aintree and Sandown before winning the King George VI Chase at Christmas. But in the form of Native River, he was facing a doughty opponent, a horse that would relish the Everglades-like conditions of the racecourse on the final day of the Festival. The rain had come and connections of Native River all manufactured a smile.

The 11-year-old is a predictable sort. He relishes a cut in the ground and, if given a handy lead in a mud bath, rivals are left confronting their fate from the outset, accepting the deluge of mud slung back in their direction from the hooves of the leader cantering off up ahead. Might Bite tailgated Native River around the hallowed venue and at the penultimate fence seemed to have ensured his peerless talent had overcome the persistence of his rival.

“Under pressure the far side is the brave Native River,” bellowed commentator Simon Holt as he relayed events before him, Might Bite now looking to make his move and heading the tiring leader. It’s a word that should perhaps be used more sparingly in sport, but referring to the horse as brave seemed the only logical adjective in this instance. Making all the running for three miles of a Gold Cup before finally climbing that gruelling hill towards immortality requires inimitable levels of the trait, of which Native River has in abundance. Seconds after his previous utterance, Holt’s tone had changed as the eventual winner grew wings leaping the final fence, lifting himself and jockey towards the winning post in front.

It’s a frequently-executed trick by the champion that began his career on the point-to-point scene in Dromahane. Even on quicker ground, the horse is consistent, producing highly commendable performances in both of his other runs in the Gold Cup - 3rd in 2017 and 4th in 2019 - with that recognisable front-running style which is always implemented regardless of the going. His 2019 result was probably most informative of all. The race was run on ground quicker than he would have liked and, even at that, he experienced a rare off-day, never travelling how or where he would have wanted. And yet he finished in the money. Bravery is perhaps indeed the only word for it.

A month later he arrived at Aintree on the ground he favoured and won the Many Clouds Chase by a whopping 33 lengths. Since then he’s won another two Grade Twos with ease, and though finishing third in this season’s renewal of the Many Clouds Chase, he handed Frodon, the subsequent King George VI winner and another Gold Cup prospect, a lesson in front-running, beating his younger opponent into submission before the fifth fence.

However this year’s running of the race pans out, expect Richard Johnson and his partner to jump out, as is their wont, and frame the race at a pace they desire. Frodon will probably follow suit, with the rest jostling for position in behind. And so it will remain until they begin the climb down from the highest point of the course beneath Cleeve Hill and towards that famed stretch of land that is the making and breaking of champions.

Champ has shown that he has the stamina to produce a late attack as he did when stealing victory in the 2020 RSA Chase. The Henry de Bromhead duo of Minella Indo and A Plus Tard have, too, displayed the hallmarks of true stayers and will likely only make their challenge after swinging around the final turn, while Santini and Al Boum Photo will be hoping for similar conditions to last year’s renewal, with the former hoping that he can find an extra neck, the margin by which he lost in 2020. Royal Pagaille, meanwhile, remains somewhat of an enigma, emerging from handicap company with a fearsome reputation and taking his first dip in a Grade One in the greatest race of them all.

It’s a tough assignment for an 11-year-old, an age profile that doesn’t boast a great record in the race. If Native River wins he will be the oldest horse to win the contest since 1969 winner What A Myth. Breaking a half-century record requires a horse of Pegasus proportions, and though the 2018 winner has never been a character that has enthralled the public, he is near-on unbeatable when the ground remains soft

"I wouldn't swap him for another one,” insisted Richard Johnson when asked about his ride’s chances in this year’s renewal, cognisant of the fact that his chances are being dismissed on the whole.

And after a below-par year for Colin Tizzard, his yard’s lack of form following the cruel passing of his daughter last May, it would be a bittersweet win to end his career. Only last week, he announced that he would be handing the keys to the yard over to his son, Joe at the end of the season, insisting that his heir would be taking complete command of the operation and that his transfer was not merely a changing of titles whereby he retains some control.

There are many potential storylines with happy endings attached to this year's renewal: the overlooked Al Boum Photo claiming the storied three-in-a-row, the charismatic duo of Frodon and Byrony Frost completing the King George/Gold Cup double, Champ, a favourite of JP McManus and named after AP McCoy, overcoming a lack of experience against seasoned opponents, Rachel Blackmore becoming the first female jockey to win the race aboard A Plus Tard.

But having two unassuming characters head together for the sunset is perhaps the most fitting end to a most bizarre year.

Six socks, two legends, and a gratifying story that will outlive us all. 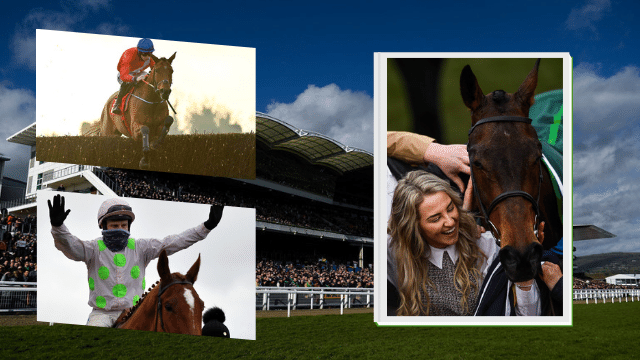