Limerick's Cian Lynch has been one of Ireland's best hurlers over the last few seasons. He delivered the goods again yesterday, claiming a second All-Ireland medal, following his sides 0-30 to 0-19 victory over Waterford.

It's been difficult year for all of us, but the Patrickswell man and his family have had to deal with a fair share of tragedy over the past few weeks, as Cian's uncle Paul Carey died tragically in a car accident in Dubai last month. Paul was a brother of legendary Limerick hurler Ciaran Carey and hurled for Patrickswell and most recently Sharjah Gaels in Dubai.

Lynch was speaking to Marty Morrissey on RTE Radio's Morning Ireland this morning, and the 2018 Hurler of the Year paid tribute to his uncle Paul.

"That’s the harsh reality of life Marty. It’s great going out hurling and it’s a massive zone for us to switch off and forget about things, but personally it’s just been huge for my family.

"The last few weeks especially – those games have given my immediate family great sense of joy and a distraction from the reality of things. Just to mention Paul – he was a massive role model to me as a person.

"I always allude to it – we have to enjoy every moment we have here because no-one knows what’s around the corner. That just epitomises it. It’s just appreciating each other and I’m blessed with the family I have and the support here in Patrickswell.

Limerick captain Declan Hannon also paid tribute to those who passed away on this most challenging of years when speaking to Sky Sports after the match.

Lynch was named on the Sunday Game team of the year and he remarked how the hurling has kept him going over the last few months.

'As I said the lads over the last few months – it’s all we’ve had. We’ve had each other and they’ve just dragged us and pulled us together to pull us through.'

'As I’ve always said, I’ve massive faith. I know Paul and everyone else that we’ve lost along the way, there’s a few other people within the team that have lost family members over the last few weeks.'

'They pull us through these hard times and guide us. To every other family across the country who’ve lost people, whether it’s due to Covid, or other ways or means, we’re thinking of ye and just stay strong like.' Lynch said.

Lynch was impressive for Limerick yesterday and Kyle Hayes and himself combined for what would have been one of the greatest goals ever scored in Croke Park, only to be denied by an excellent double save from Waterford goalkeeper Stephen O'Keefe. 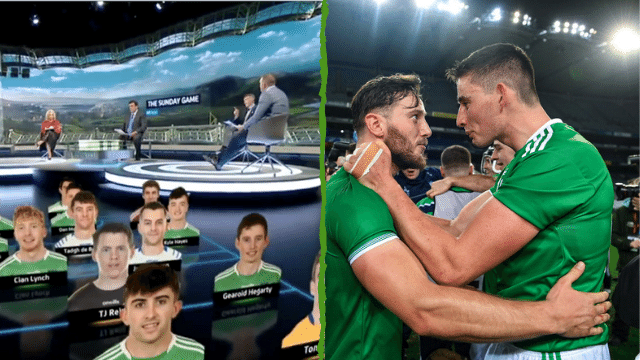 GAA
1 month ago
By Gary Connaughton
More Than Most, Cian Lynch Appreciates The Importance Of Balance In Life
GAA
1 month ago
By Jonathan Byrne
Lynch And McGeary Take Home The Big Ones At PwC All-Star Awards
GAA
4 months ago
By PJ Browne
Limerick Backroom Team Rumours Not Fazing Cian Lynch
Popular on Balls
The Rewind
2 days ago
By Eoin Harrington
Watch: Brilliant Line Of Duty Edit Sums Up Boris Johnson COVID Party Farce
30