'In School I Was Asked What I Wanted To Be, I Said A Down Hurler And They Laughed At Me'

"It is probably one of the best wins I have had in a Down jersey," Eoghan Sands reflects, days on from his side's dramatic Christy Ring Cup semi-final victory over Offaly.

Down won the game via the first ever inter-county hurling championship penalty shootout. Their reward was promotion to the Joe McDonagh Cup and a place in this weekend's final against Kildare at Croke Park.

"Leading up to the game, there was a lot of talk about the last time Down played Offaly in the championship 25 years ago," says Sands, speaking on a Thursday morning video call.

"That was actually the year I was born, my father would have been playing. I grew up on stories of Down's great run in the 90s.

"He would always have told me stories about the great days, they won three Ulster championships in five years, in '92, '95 and '97. They had a couple of great days out. They beat Kilkenny in '93 to relegate them in Nowlan Park, DJ Carey was playing.

"They beat Offaly a few times. They got a great few hammerings as well. You go on to YouTube and you can see the clips, we have old videos in the house we would have watched. That is what I would have aspired to do.

"I remember in primary school somebody asked me what I wanted to be when I grew up and I said a Down hurler, they kinda all laughed at me. But I didn't know any better back then."

Goalkeeper Stephen Keith was the hero for Down in last Saturday's shootout, saving three and scoring one.

"I actually hit the penalties for our club, but it is a bad job whenever your full-back and goalkeeper is hitting them before your full-forward," says Sands with a smile.

[Our manager] Ronan Sheehan just came up with a list after. I would have put my hand up to take one, as I said, I hit them for the club. Ronan picked the five. Stephen actually came to me, he knew I wanted to hit one, and said, do you want to hit mine and I'll step aside. I said to him, 'look, he's picked you, it is your time'.

We had belief we could beat them, probably inside our camp. Nobody else gave us a hope. We thought we performed to the best of our ability on that day and if we did that we could get the win.

We probably thought we left it behind us in normal time and extra-time, although Offaly had their chances, as well. The way it kinda happened with Stephen Keith, who is our captain, saving three penalties and then scoring the winner, it was just a wave of emotion like.

Portaferry is home. He's back there now after a year spent living in Carrick-On-Shannon while working for Lakeland Dairies. Sands enjoyed his time in Leitrim but not the six-hour round trip between there and home. Nor did he like the decreased time on the hurling pitch.

Down and Kildare have already met twice in this extended season with Sands's side winning both games. A Kehoe Cup meeting nearly a year ago, when they were drinking cups of tea at half-time to stay warm, stands out. Though, Kildare have been a bogey team for Down in recent years. 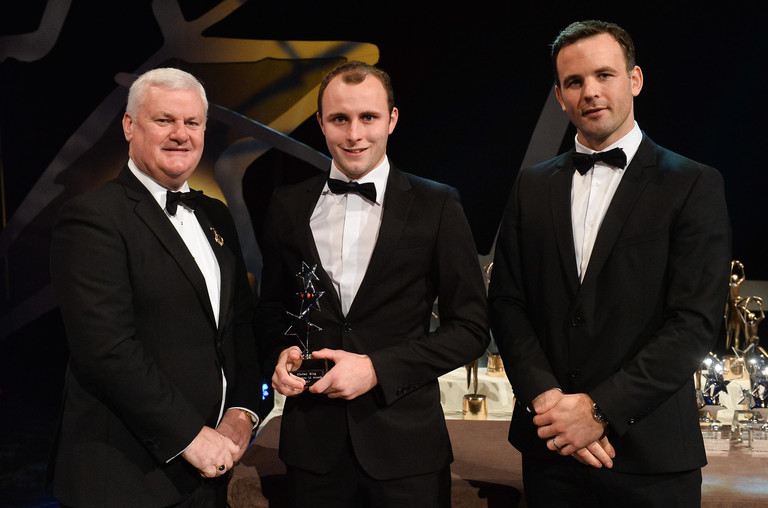 3 November 2017; Down hurler Eoghan Sands is presented with his Christy Ring Champion 15 award by Uachtarán Chumann Lúthchleas Gael Aogán Ó Fearghail, left, and David Collins, GPA President, during the PwC All Stars 2017 at the Convention Centre in Dublin. Photo by Piaras Ó Mídheach/Sportsfile

"They have been playing a bit of a higher so it is going to be a tough battle," says Sands.

"Even though we have both been promoted, there is still a national title on the line. You don't want to go to Croke Park and not try and win it.

"When we set out at the start of the year, we knew the team we had was capable of playing at the higher standards.

"We wanted, first of all, promotion to Division 2A to play the likes of them teams. We achieved that.

"With both finalists this year getting promoted to the Joe McDonagh, that was another aim. We will now be playing the likes of Antrim, if they don't get promoted, and Kerry. That is what we need for Down hurling to progress.

"Antrim have a wider pick than ourselves, we are working off a small pool of clubs there. To compete with the likes of Antrim at the top end, we need more clubs playing senior hurling in Down. I just don't think we have the pick yet.

"We'll give Joe McDonagh a lash next year and we'll hopefully get over Sunday first. I have aspirations of that high level and I know other fellas in the team to do. It is something we are pushing toward."

Featured image: The Down team celebrate with the cup following the Allianz Hurling League Division 2B final against Derry at the Athletic Grounds in Armagh. Photo by Sam Barnes/Sportsfile

See Also: The 13 Most Iconic Hurling Helmets Ever Worn