Séamus Harnedy Admits Luck On Cork's Side After "Rollercoaster" Finish

What a game, and what a finish.

Cork booked their place in the Quarter-Finals of the All-Ireland Hurling Championship, with a 3-19 to 1-23 win over Clare in the LIT Gaelic Grounds.

The game seemed relatively safe in Cork's hands until the final few minutes. Clare's star man Tony Kelly won a penalty and found the back of the net with it late on.

Then the real scare for Cork came in the dying minutes of extra-time. Kelly broke away from the Cork defense, only to have a close-range shot saved by goalkeeper Patrick Collins.

Patrick Collins makes a crucial save for @OfficialCorkGAA to keep them in the lead. pic.twitter.com/i3rJBNMAl2

The final whistle blew seconds after, and The Rebel County breathed a sigh of relief. One of those was Littlewood's Man of the Match Séamus Harnedy.

"Yeah, a bit of a rollercoaster," Harnedy said about the finish. "In fairness, Clare never died in the end. Only for Pa Collins making a last minute save we would have been out of the Championship."

The St Ita's clubman knew his teammates had luck on their side not to concede a last minute goal. "You need a bit of luck from time to time," he said. "A lot of things went wrong, but we stuck to our guns and game plan."

Harnedy was full of praise for his teammates in a warm day for all involved. "It was a very, very hard day out there," he said. "I'm just thrilled as we've a young group ... by god did they stand up when they needed us today."

Cork's goals were the difference to bridge the gap in the end. "It was something we focused on throughout the league," Harnedy said. "Shane Kingston and Shane Barrett ... their movement was pivotal for the goals."

"There's only six teams left, every one of them are there out of merit." A draw will be held on Monday morning to see where Saturday's winners Cork and Waterford line up in the Quarter-Finals draw.

After exiting the Munster Championship in the semi-final with a defeat to Limerick, Cork will play one of the losing provincial finalists in Dublin or Tipperary.

It was a monumental day for Harnedy's teammate Patrick Horgan, who amassed over 500 inter-country hurling points having gone into the game at 499.

Horgan joins an elite club of three hurlers who've made the mark, with Henry Shefflin and Joe Canning the other two on the list. 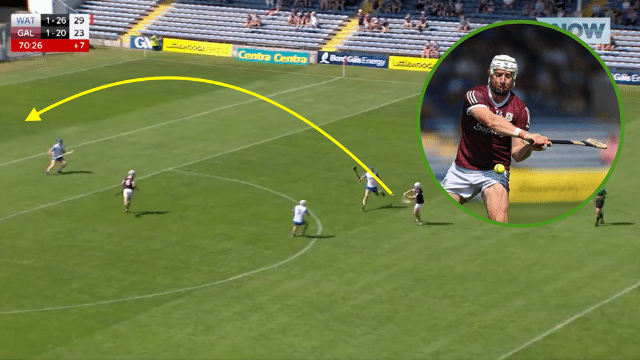